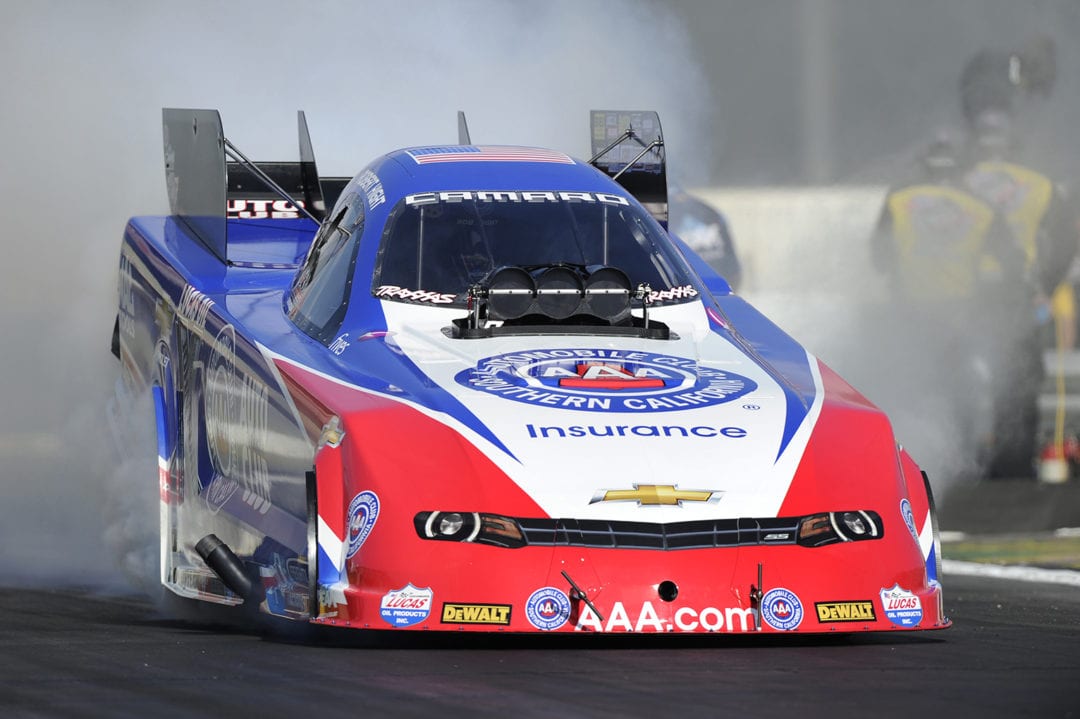 The defending O’Reilly Auto Parts Spring NHRA Nationals winner has a number of fond memories racing in Baytown, Texas.  It was just Robert Hight’s fourth career start behind the wheel of the AAA Texas Funny Car that the crewman turned driver would wheel himself into his first winner’s circle in 2005. Since that win Hight has been one of the most dominant Funny Car winners over the past ten years. On the heels of racing to his first final of the season Hight will return to the NHRA Spring Nationals ready to pick up his third career win at the ultra-quick Texas race track.

“You can see great ETs if the conditions are right in Baytown. The track is basically at sea level so we could see some awesome times. Low ETs are great but the thing that is going to win races is consistency and that is what we are starting to get with this AAA Texas Chevrolet Camaro SS Funny Car. We shot out a spark plug on that last run with John (Force) in Las Vegas or we would have won that race. We were in a no lose situation with two JFR Chevys in the final but I still wanted to see that win light,” said Hight who moved up to No. 3 in the Mello Yello Funny Car point standings.

Last season at Houston Hight won and appeared in his fifth consecutive final round of the season. Hight would extend that streak in Atlanta with another win to give him a run of six straight finals and four wins. It was a dominant stretch but Hight knows that early season success doesn’t guarantee Countdown win lights.

“Last year we start so hot we wanted to maintain that high level and we just couldn’t do it. This year we have two semi-final finishes and a runner-up coming into Houston and I honestly feel very confident. (John Force’s crew chief) Jon Schaffer came over before the second round in Las Vegas and helped us fix a problem and we won a key round. This is a whole team effort at John Force Racing. Last year we helped a lot of teams with tune-ups and they helped us. We are doing the same thing this season and we are starting to see some success,” added Hight.

Since that first win in 2005 at Royal Purple Raceway, Hight has built an impressive streak of success that has not been matched by any Funny Car driver in history. He has won at least two races every season of his career and also been No. 1 qualifier at least once. He won the Chevrolet Performance U.S. Nationals in 2006 just his second time competing at that race. He has won the most prestigious race three times total and also has two runner-up finishes.

Hight will readily admit that he was fortunate to start his career with a great crew chief and team and now is with future Hall of Fame crew chief Mike Neff. Hight and Neff have clicked since they were both former crew guys that worked their way up. Both have driving experience and wins at the O’Reilly Spring Nationals. Hight’s unbelievable work ethic has also been a huge help throughout his career. He works harder at being a good driver than just about any one. His qualifying reaction times are consistent with his race day reaction times.

In the ten years since that 2005 win in Houston Hight has stood in the winner’s circle of all the “Majors” except the Summernationals in Englishtown. Most NHRA historians recognize four “Majors” on the NHRA Mello Yello Drag Racing Series starting with the historic Chevrolet Performance US Nationals Labor Day weekend, the Gatornationals in Gainesville, the Summernationals in Englishtown and finally depending on whom you talk to either the Winternationals or Auto Club Finals in Pomona. Hight has multiple wins at all the majors except Englishtown where shockingly he has never reached the finals with three US Nationals wins, two Gatornationals wins and three Winternational wins to go along with an Auto Club NHRA Finals win.