With renewed confidence, 2009 Funny Car world champion Robert Hight is looking forward to keeping his recent momentum going as the Mello Yello Countdown to the Championship playoffs open next weekend at zMAX Dragway.

Hight stormed to the Chevrolet Performance U.S. Nationals victory Sep. 2, ending a 35-race winless drought that had the veteran driver and president of John Force Racing scratching his head and taking a deep look within. 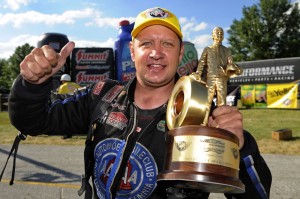 Hight powered his Auto Club Ford Mustang to his 28th career victory and third at the world’s most prestigious drag race, by outrunning red-hot Jack Beckman in the final round. With the victory, it increased JFR’s stronghold on the tradition-rich Indy event, as the team has now claimed that trophy in six consecutive seasons.

But more importantly, Hight got his mojo back. And just in the nick of time, as the first of six playoff races in the NHRA Mello Yello Countdown to the Championship opens Sept. 13-15 at zMAX Dragway during the Carlyle Tools NHRA Carolina Nationals presented by NAPA Auto Parts.

“(It was) definitely the biggest win of my career,” said Hight of his victory at the Big Go. “You start doubting yourself. We won four in a row last year early in the season and then just went on a complete dry spell.”

Hight has advanced to only two final rounds since his four-race win streak ended last April at zMAX Dragway during the NHRA Four-Wide Nationals, producing two runner-up finishes: at Atlanta in 2012 and this past May in Topeka. During that stretch he posted an uncharacteristic 15 first-round losses, including five of them during last year’s six-race Countdown playoffs. He ended the 2012 season in seventh place and has been around the 10th place bump spot for most of 2013.

To help Hight get out of the slump and shake things up, he and team owner John Force switched teams earlier this season just before the Western Swing. Before the Indy win, Hight and new crew chief Mike Neff had produced one semifinal finish and three quarterfinal efforts. It appears they have found their groove just as the playoffs arrive.

The last time he barely made it into the playoffs he won the championship, in 2009. Not that the competition was a cake-walk back then, but with a tough contingent of challengers like playoff top seed Matt Hagan, Ron Capps, Beckman, Cruz Pedregon, Tim Wilkerson and his own teammates – John and Courtney Force – Hight knows that winning the title this year will take plenty of focus, dedication and hard work.

“It is not getting any easier,” Hight said. “In fact, I think the competition is tougher now than when I won the championship in 2009. You don’t see people going out there and winning three races in a row anymore. It just doesn’t happen.” 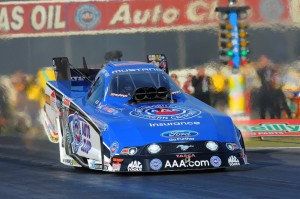 Hight hopes to get off to a good start in the Countdown playoffs. He’s had some success at zMAX Dragway; in addition to his four-wide win in 2012, he also took the 2009 victory at this event to launch his run to the world championship. When he won his world title in ’09 he earned three victories during the playoffs. He’s expecting it to take a similar effort to get the job done this season.

“If we want to win the championship we are going to have to win at least two races,” Hight said, “and go to the semifinals in the rest of the races.”