Despite problems encountered during the early qualifying rounds, Helms eventually mastered the racing surface at the Texas Motorplex south of Dallas to record the quickest qualifying elapsed time, the quickest elapsed time of eliminations and to accept the champion’s trophy for a team which has been involved in the creation of the sport’s newest class. 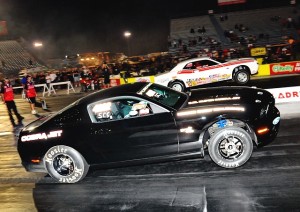 Helms, the holder of multiple NHRA World Titles who manages the Southland Speed arm of Teuton’s massive Chrysler dealership complex in Houma, Louisiana, debuted his V-10 Challenger at the very first ADRL SuperCar Showdown event in Baytown, Texas. Teuton, whose drag racing career spans more a half century and includes the 2011 NHRA U.S. Nationals title, was chosen as a consultant to the ADRL in the development of rules for a category of drag racing designed expressly for the world’s most powerful cars in current production in unmodified configuration. With Jeff Teuton’s help, the new class has drawn tremendous response from fans, racers and auto manufacturers making the first season of racing a resounding success.

An event title, however, eluded Teuton’s Southland Dodge team. An electronic problem stymied both Teuton and Helms through most of the qualifying periods and it was Henson’s new Ford Mustang which led the field with an elapsed time of 5.84 seconds for the eighth-mile at a finish-line speed of 118.49 miles per hour. After a night of contemplation, Teuton and Helms solved the electrical mystery and returned in the final qualifying session to clock a 5.82-second blast at 117.59 mph to not only take over the low qualifying position, (a first for Chrysler in the SCS series),  but record the quickest run yet made by a MoPar in SCS competition.

Henson, owner of the Henson Family of Auto Dealerships in Madisonville, Texas, was pleased with multiple 5.8-second runs from his new Mustang during the qualifying rounds but admitted, “I knew the Dodge was having problems so I was a bit surprised to see them steal the low qualifying position.”

While both Helms and Henson slowed to low six-second elapsed times in the early rounds on race day, the Texan’s Super Cobra Jet regained the role of favorite with a 5.95/116.24 semi-final round defeat of fellow Lone Star standout David Buckner in the Evolution Custom Auto-sponsored 6.1-liter V8-powered 2011 Dodge Challenger.

In the championship round, however, Helms’ Challenger again turned the tables on the Ford. In an intense match which pitted the naturally-aspirated 512-cubic inch Challenger against a supercharged 302-cubic inch V8 Mustang, both cars launched from the starting line in huge wheelstands and the Dodge behemoth charged to a 5.88/116.42 to beat Henson’s 5.95/117.04 effort.

Responding to questions from fans in the winner’s circle about the Challenger SRT Drag Pak’s factory-rated 650 horsepower capabilities, Helms noted, “The V10 Challenger will make closer to 800 horsepower. I know because I’m the guy who puts the engines on the dynomometer. Taming that power is the difficult part. When that power gets put to the ground efficiently through those nine-inch wide rear tires, the big wheelstands will come every time. We finally got the car to behave in the final round and that big wheels-up launch is exactly how it should work.”

Tueton, the ageless drag racing pioneer, also took part in the victory celebration, telling fans and media, “It was great to get a win in this new series especially at the end of the year. I want to thank Dale Aldo, the Director of Motorsports for MoPar, who has been such a huge part of what we’ve accomplished with these cars. This class has made a lot of progress this season and to score one for everybody at the Chrysler Corporation, from the SRT engineers to the dealers, is really a thrill for our team. We‘re really proud to be a part of this.”