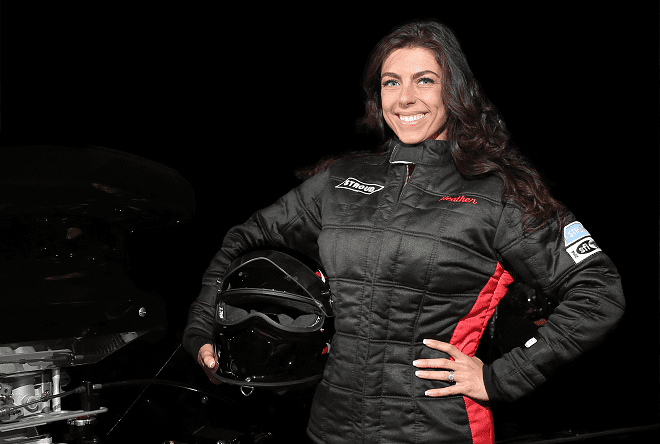 Gerry Capano has steadily worked his way through the paces of doorslammer racing to reach the height, thus far, of his career in PDRA Pro Boost and NHRA Pro Mod. He began in 1995 in a local outlaw series in the Pro Street division. In 2010 he was crowned the NEOPM Rookie of the Year and in 2014 he earned a very respectable eighth place finish in PDRA Pro Boost.

Standing faithfully behind Gerry for many years was wife, Heather, who acts as Team Manager and takes care of duties that range from head chef to back-up girl and car maintenance between rounds. Although Heather has become fairly well known herself for her various roles, she’s soon to make another name for herself as driver. This season she will make her debut in PDRA Top Dragster.

Heather, a hair stylist by trade, earned her competition Top Dragster license in August of 2014, during the same weekend her son Gianni earned his Junior Dragster license. Gianni began racing right away, finishing out the 2014 season. For 2015, all three Capanos are planning to be competitive drivers with the PDRA, truly living up to their Fast Family status.

“I’m thrilled to have the opportunity to be able to do this,” Heather stated. “My husband is the main reason this has gone from dream to reality. I’ve always been a racing enthusiast, and being with Gerry I’ve gotten to experience the thrill of being behind his car and being a part of the team and watching him on his runs. I’ve always been anxious to get behind the wheel. After a few years the opportunity arose and I took it.

“We started racing Pro Mods with an outlaw series, not professionally like we are now. So every year we progressively got faster and more professional and worked our ways up to the pros. The more I learned, the more anxious I got to experience it on my own.”

When she got that experience, Heather says she was hooked, “The fastest I’ve been in the quarter is a 7.71 at 170MPH. We’re hoping I’ll be about 4.60 in the eighth. It’s an adrenaline rush. Immediately, being in control, I feel like I was hooked. I can understand what the drivers always say about being addicted, because you get behind the wheel, you feel the power of the engine, you hear the noise, you get to top end and immediately your thought is, can I go again? My first time in the car really just solidified how people say they’re addicted to drag racing. That adrenaline rush hooked me immediately.” 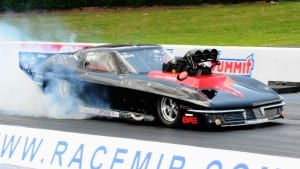 Heather plans on being just as involved with her own dragster as she is for her husband’s Pro Boost operation. “I”m the Split Racing Team Manager. I handle everything from loading the motorhome to helping tune the car to pit crew. I’m his back up girl. I kind of do it all. I’m pretty hands on when it comes to anything with the crew. My husband likes to call me the co-crew chief because I really help our crew chief stay organized. I cook and take care of everybody. I help change the jets in the car. I make all of the arrangements. I’m like everything from Team Manager to Team Mom. They call me the Pit Boss, actually.”

It was actually Heather’s father who first introduced her to racing. When she was growing up he had a race car fabrication shop and would take her along as a spectator to events. Later, roles were reversed when Heather’s father would join the Split Racing Team as a spectator. Now, Heather notes that the family has come full circle as her dad gets to step into the role of Crew Chief for her dragster. “My dad and my husband are going to be the crew chiefs on my car. I plan on being in charge of the weather station and knowing what’s going on and keeping my own log book, but my dad and my husband will be in charge.”

Heather will be competing in a Mike Bos Dragster, assembled by her father and powered by a 572 ci Keith Black BBC engine, which was assembled by Gerry’s engine builder, Leroy Dewdney. Split Racing is backed by HE&M Saws and Amalie Motor Oil. Aerial Signs and Awnings is coming on board Heather’s Dragster for 2015 as well.

Heather admits to having more nerves watching her son race for the first time than watching her husband or when she got behind the wheel herself. “You send your husband down the track in a five second Pro Mod, and then you send your kid down the track and the feeling is totally different. By the time I got my husband back in the car, I was like, ‘Shew, thank God.’ But now he knows the drill.” Nine year old Gianni will be back on the PDRA tour in Top Junior Dragster again in 2015.

Now it’s Gerry’s turn to worry, watching his wife go through the same paces they’ve helped their son through. “He’s always very adamant about me staying calm and letting the car settle down.” Heather explained. “It’s safety first with him. For him, it’s the same watching me as it is for me watching our son. It’s funny the way those things work. He’s 100% supportive of me, though, and I wouldn’t be doing this without him.”

Heather plans to test at local tracks to get more experience, but her racing will largely be concentrated at PDRA National Events. With a realistic perspective, Heather and Gerry aren’t planning to break TD records this season. The plan is for her to get comfortable behind the wheel and move up in speed when she’s ready.

“My main focus for 2015 is to gain knowledge, experience and seat time,” Heather added. “My biggest goal is to actually qualify for a PDRA National Event in Top Dragster, but my main focus is really just to gain that experience and seat time behind the wheel. I want to earn seat time in order to steal one of my husband’s Hemis in the future. If I get enough experience this year I think Gerry might kick one in the corner for me.”

Gerry’s own program continues to make strides, and despite fielding a third car this year, the couple has no plans to slack off on their Pro Mod operation . “Gerry finished eighth last season in Pro Boost in just his first year racing on a national level in his Pro Modified car. He also finished top 28th in NHRA Pro Modified, even attending only five out of their ten events in 2014. We had an awesome year last year and are hoping to improve this year.”

Although three out of three for race car drivers in one family is enough to earn the title Fast Family, there’s more to it than that. Another passion of Split Racing is physical fitness, which Heather believes also plays a major role in their success on the track.

“I’m an avid fitness enthusiast, anything from trail running to yoga. Cooking, racing, and training – that’s my life. My husband and I used to run an annual half-marathon every March. I think we’ve done four or five of them together. Now it seems racing season begins sooner and sooner. So now we run together at the race track. That’s when we have time to do it. We get up early, before the crew, sneak out of the motorhome and go run around the track before the hectic day gets going.

“I suit my husband up. I’m the one that buckles him in the car and helps him put his helmet on and his fire suit. When I begin doing this for myself, I started to really see how much 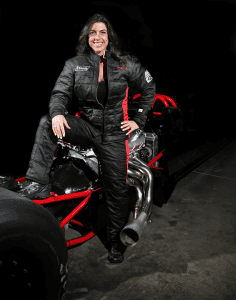 fitness can play a role. I have to say that if it wasn’t for me knowing how to breathe, between running and doing yoga, putting on all the gear and fire suit could be an overwhelming experience. Everything is cut off and strapped in. Being in good physical condition was a big thing that I believe helped me get off to a good start in my driving.”

Heather’s commitment to physical fitness is obvious from her appearance. This probably also hasn’t hurt her becoming most well-known as Gerry’s back-up girl, as she could easily rival back up girls from decades past, even coming in as a top 3 finalist for 2014 Back-Up Girl.

More than just a pretty face, Heather’s hands-on approach to everything she undertakes has her gearing up for the ride of her life in 2015. Her disarming smile won’t tell the whole story this year. Heather Capano is focused and ready to be as fierce a competitor as any.