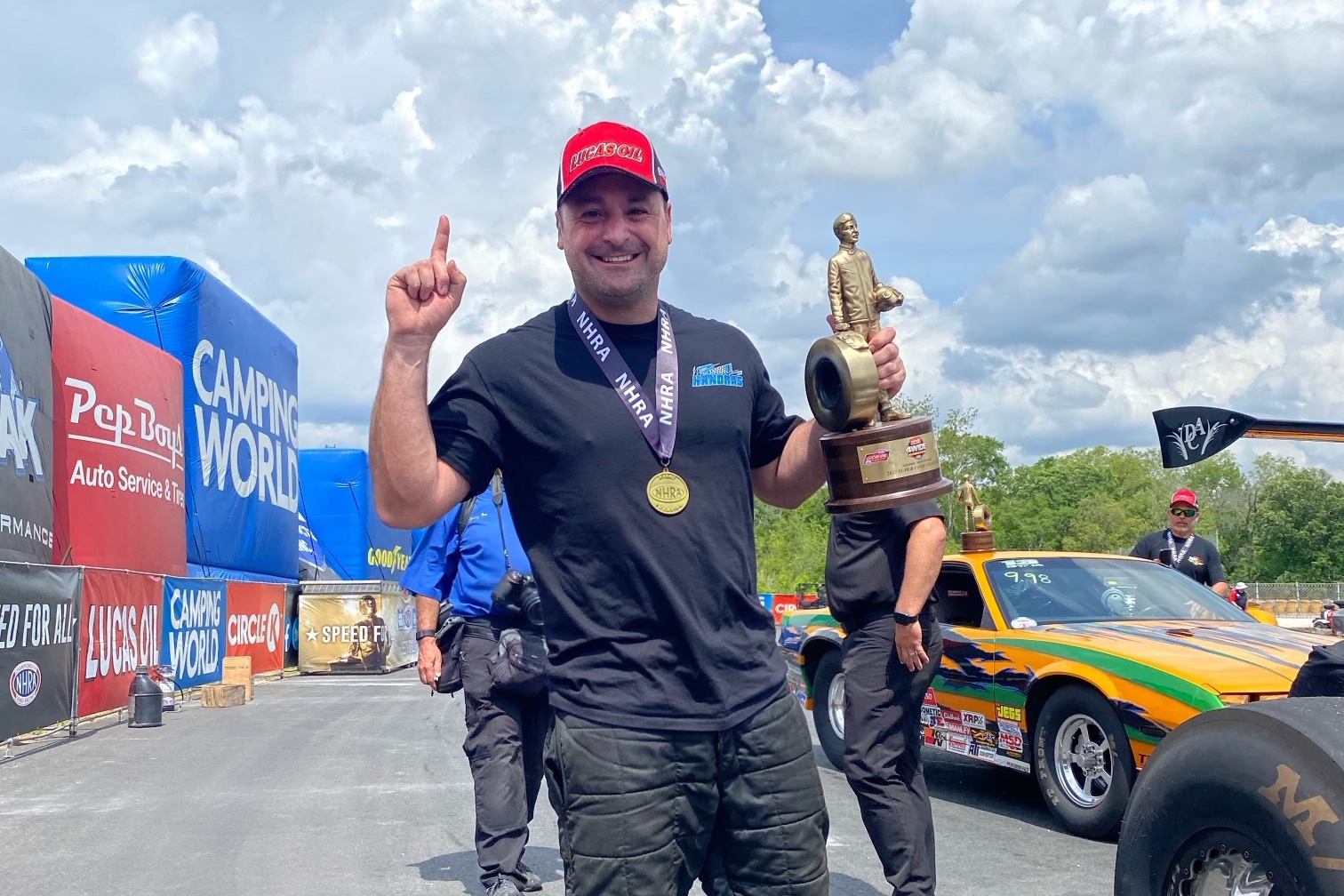 After a runner up finish due to an -.002 redlight last October in Charlotte, Michael Handras returned to ZMax Dragway two weeks ago determined to redeem himself and did just that in his debut race with new primary sponsor, VP Racing Fuels and Lubricants.

The reigning Division One Super Gas Champion, who calls Brooklyn home, is fielding three cars this season in partnership with Duane Shields Racing. With a new hauler, new sponsors, and full-time crew member Jason Oteri joining the team, Handras’ win is the first National Event win in a career that spans more than 15 years.

“We had a great car this weekend,” said Handras. “The Eastburn’s put this dragster together for me last year and I knew if I did my part, we’d get to the winner’s circle sooner than later. Having Jason Oteri on board to dial it in at ZMax was key as we continued to advance through the weekend.”

Another close race in the semi-finals against Mitchell Harkey set up a final round square off with multi-Lucas Oil Drag Racing Championship winner John Labbous. Handras grabbed the lead in the final with a .008 to .016 reaction time advantage over Labbous. Labbous took .009 at the finish line, breaking out with an 8.892 and handing the win to Handras who ran 8.909.

“I’ve raced John a couple of times and it’s no secret he is one of the best in the sport. We were fortunate to have a consistent car and luck on our side this weekend to get us to the winner circle. I’ve been chasing this Wally in Super Comp since 2014 and wanted this particular win so badly after runner-upping last fall,” added Handras.

Handras grew up at Long Island Dragway where his family owned and operated the concession stands. “Mikey” quickly gave up his dreams of being a collegiate swimmer to get behind the wheel in Super Street in 2007. He continued in both Top Sportsman and Pro Mod until starting his own Super Comp Operation in 2014.

“We made a couple of changes over the winter to make the car more consistent including switching back to VP Race Fuel Q15,” said Handras. “Winning our first race under the VP umbrella was a great way to launch our multi-year partnership.” 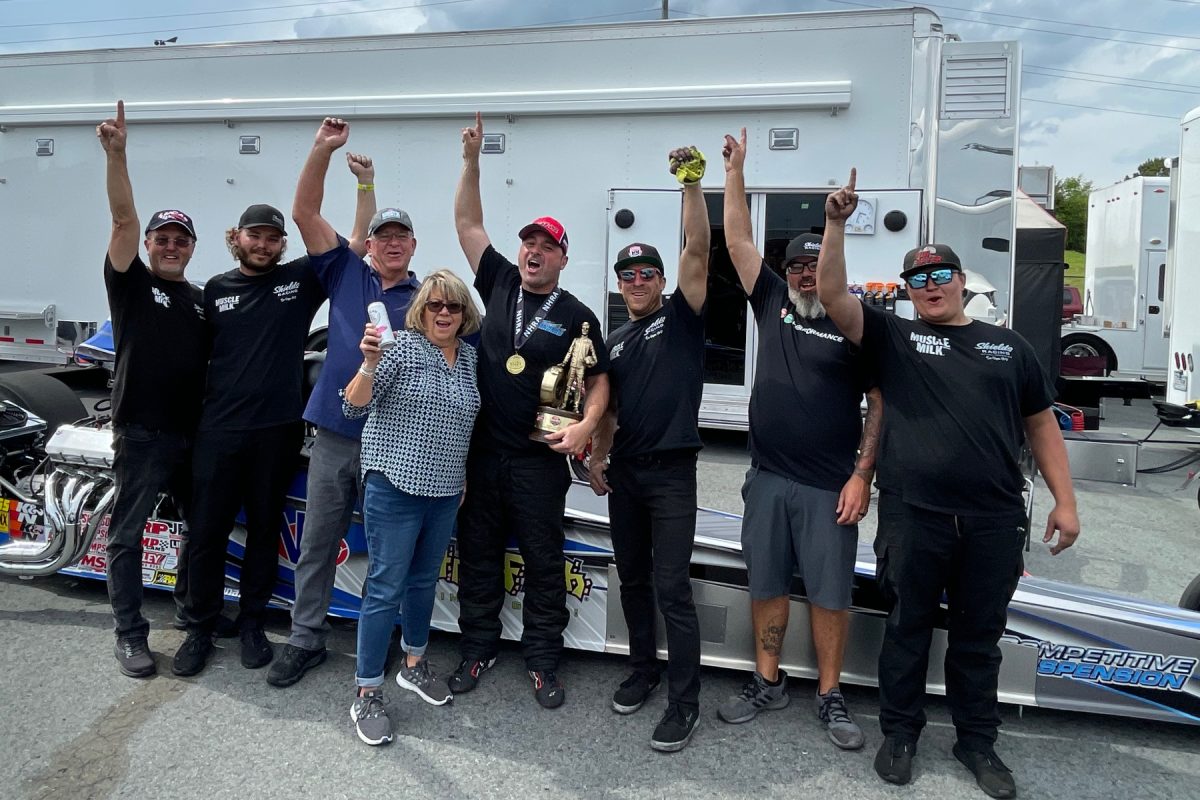 “There are so many people behind the scenes to thank when you finally make it to the winner’s circle and I don’t plan on missing one. Thanks to my family, Duane and Betsy Shields, who have been a huge part of my race program. Billy Rieck, Liz Esteban and Jeff Stricker from VP Race Fuel and Lubricants, Shane Sweigart at Competitive Suspension, Lee and Barb at C2 Converter & Machine, Kyle and Kenny from NitroFish, everyone at JEGS, NGK, Hoopes Fire Prevention, and Muscle Milk. Thanks to Bill Frederick and Larry Strickland at Elite Chassis Fabrication, Scotty G Race Engines, Gary Stinett, Jake and Kelli Barbato, Joseph Charles Gallucci III and Joseph Gallucci Jr., Michele Costa and Rich Rose, Duke Bodnar, John Murphy Jr., Harry Pappas, Colin Richards, Paul Stalba, Genti Smaci, Logan Klein, Scott McCracken, Travis Shumake, Christopher Mullins, Bo Smith, Frank Anthony Volpe, my stepbrothers Cory Ream, Chase Ream and Mike Bodnar, Tinker, the Eastburns, McAuleys,  Letelliers, Tavares, Frickes, Iaconos, Richards, Kenny’s, Volpes and Davidowskis. I couldn’t have done this without any of you,” added Handras.

Coming off this win, Handras has added the upcoming Virginia Nationals to his calendar in hopes of keeping the momentum alive and will field entries in both Super Comp and Super Gas.