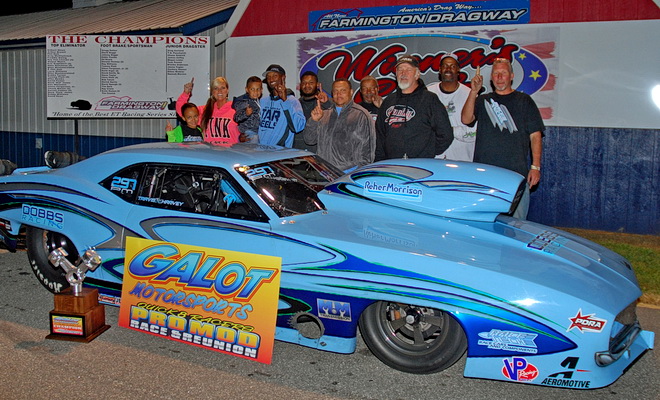 “First I want to thank God for letting us be here,” Harvey said. “The last few months have been terrible for us. We’ve just been breaking parts. We broke a motor at Big Dog. We finally got the car figured out to go down the track from A to B. It’s been really good to us.”

After the third and final round of qualifying Tutterow grabbed the pole with a lap of 3.854 at 194.77 mph, making him the DRAG ILLUSTRATED number-one qualifier and picking up an extra $500. Also, during the third round of qualifying Tutterow decided it was time to take home the Sammy Phillips Electric burnout contest award and the $1,000 that went with it by smoking the tires well past the 660-foot mark. Tutterow’s qualifying speed also earned him the Hank Thomas Performance top speed award for the day.

Ward and Monday got the action going when the first round of eliminations kicked off, but Monday had engine problems after the burnout and had to shut it off. Ward then posted a 4.116 at 151.48 to get the win, but all was not well in the Ward pit. One of the seals in his transmission had let go and his crew had to put in a lot of work between rounds just to make it to the semis.

The next pair up was Rivenbark and Miller. Miller had been battling problems with his engine shutting off all day and unfortunately it happened again on this pass when he posted a 4.244 at 154.26 to Rivenbark’s winning 4.009 at 186.04 mph.

The third pair to make their trip down the GALOT eighth mile was Harvey and Hawkins, who left the line first but didn’t have enough to hold off the hard-charging Harvey. A 3.887 at 191.82 by Harvey easily outdistanced Hawkins’ 4.191 at 170.30, though it marked a career-best ET for him.

The fourth and final pair of the opening round was Tutterow vs. Morrison. Again it was a come-from-behind victory as Morrison left first leave but his advantage didn’t last long. Tutterow quickly drove around him posting a 3.902 at 193.00, while Morrison was ran only4.279 at 166.36 mph.

The semifinals saw Rivenbark and Harvey go head to head with Harvey leading from start to finish. He left first and got to the stripe  with a 3.888 at 189.91 to Rivenbark’s 3.937 at 168.42. On the other side of the ladder it came down to Ward and Tutterow to see who would punch their ticket to the final round against Harvey. Ward left first but quickly ran into tire shake while Tutterow gave up lane choice for the final after posting a 3.898 at 192.67-mph pass.

The final was a classic blower vs. nitrous showdown between a pair of ’69 Camaros. The right lane had been the preferred lane all evening, so Harvey and his nitrous-boosted, Carolina-blue Camaro lined up there. The two did their burnouts and put their cars in the beams. The tree activated–and the race was over before it started as Tutterow turned on the red light with a -.002 reaction time.

“Our day turned out good,” Harvey said. “We had an ignition problem early and got it fixed. We came out and ran the .88 in the second round of qualifying. It ran a .88 every pass after that. It’s been good. We had another mechanical failure in the final round but we were lucky enough to win. I’m just glad we came out on the lucky side. I knew Todd was going to be there cause he probably figured that I was going to be there. So I got up on the wheel and cut a good light.

“I want to thank Barry Allen, he drives down every time we got a race. He’s there with me, by my side helping me keep everything together. Jeff Miller, he does everything for me. Whatever we have to do, he helps. Russ is usually here with us but had other commitments today,” Harvey added.

“I want to thank Mr. Dobbs and Von Miles. Those two own everything and finance this. Most of the time they’re behind the scenes but if it weren’t for them, we wouldn’t be here. I also want to thank my wife Shelby for letting me do this. She’s always by my side. My little man T.J. is my trophy. There is nothing to compare to that stuff.”

Tutterow also said he wanted to thank everyone that put the event together.

“GALOT Motorsports, my wife Denise Tutterow, Sandy Collins, Mark Joyce and Buddy Trivette, Sammy Phillips (who) fed everybody today. Thanks to the race track and all the staff. Also thanks to all the racers that came out. There were a lot of people involved with this event.

“The race started out good,” Tutterow continued. “We qualified number one; we were pleased with that. We won the number-one qualifier money, the burnout contest money and the mph money. We got a bunch of plaques, and everybody got some trophies. Travis Harvey ran excellent all day long. He made good runs every time. He ended up winning the race over a red-light but that’s part of it. I’ve won races that way too.

“I really want to thank Earl Wells from GALOT Motorsports. I can’t thank him enough. Without him I wouldn’t be doing this. I want to thank my crew. Brad, Scott, Wayne, Kevin, my wife Denise, my son Ty and daughter Tia. They all do more than I can ask for.”

Harvey wrapped up his day withadmiration and compliments for his final-round rival.

“Todd is a good competitor, he’s a good guy. I was just glad to be in the finals beside him. I came to races a lot growing up with my dad. I was watching Todd, Tommy Mauney and all of those guys. It’s a blessing to be racing beside them,” Harvey said.

“I just really want to thank all the guys behind the scenes. All the crew, my family, my wife, my kids, and my parents. Also, a big thanks to Race Tech, Reher Morrison Racing Engines, Red Line Oil and Hoosier Tires.”