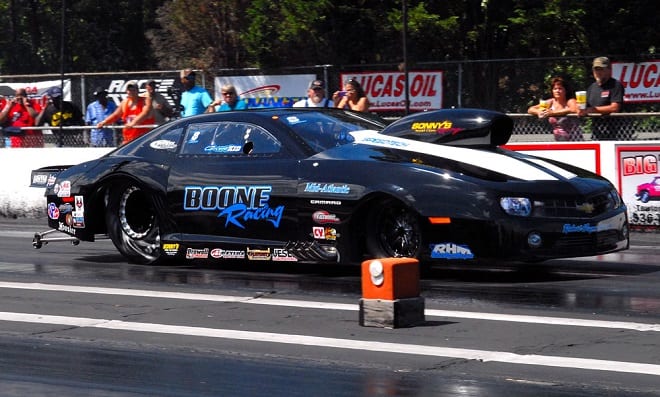 In the sweltering heat of our Carolina summer, the “Carolina Kid” makes winning look easy. Not so, Travis Harvey will tell you emphatically, all the while racking up wins AND points leading to the October Lucas Oil Shootout presented by E3 Spark Plugs.

Qualifying had EOPM points leader Jay Cox running a very stout 3.822 to take the pole and Chris Rini’s ATI Camaro second at 3.871. Harvey’s Boone Motorsports Camaro was third at 3.888 and Kevin Rivenbark’s beautiful new GALOT Corvette in fourth at a 3.909. Fifth was the next generation of Tutterow, Ty, at 3.926. Todd Howard made the cut at 3.943 in sixth with Doug Winters’ ’69 Chevelle at 3.978 and Chris Cline eighth with a 4.137.

A total of 14 cars were on the property on Friday but an untimely brush with the wall sent Charles Carpenter back to Charlotte. Saturday was no better for Jason Harris, as a motor problem sidelined the team car of Harvey. Tommy Mauney battled electrical gremlins that resulted in a huge nitrous explosion that lifted the scoop off the car and into Mauney’s line of sight. All are okay and will be back another day.

Eliminations started with Ty Tutterow, Travis Harvey, Doug Winters, and Jay Cox advancing. Cox ran a great 3.798 in the heat for low ET of the round. Semi final action went as follows; Harvey over Winters with a 3.840 and Tutterow cutting a .004 light to outrun another 3.790 by Jay Cox. The finals had “the Carolina Kid” returning the favor by cutting a .016 light with a 3.803 ET to defeat Tutterow’s .052 light and impressive 3.821. It was a great day for both drivers in points and will make the September event even more important towards determining the final qualified drivers in October. 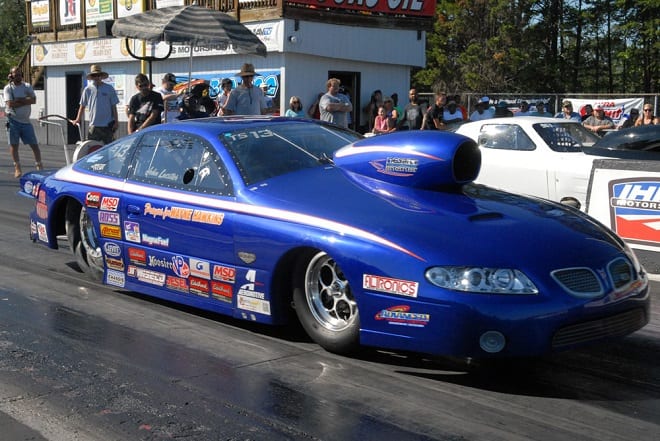 Renegade was just as competitive, with Jamie Chappell qualifying with a 4.143, John Lassiter a 4.148 and Tim Lawrence close behind at 4.163. With Lassiter running a strong 4.095 in the semis and Chappell running a close 4.135, the finals were set. Lassiter dedicated his win to friend Wayne Hawkins, still recovering from his crash, by running a terrific 4.088 to defeat Jamie Chappell’ s 4.12.

Other winners included Robert Richardson in 6.00 Raiders, Chris Dean taking the Outlaw DoorSlammer class, and Kyle Shipmon paying tribute to his grandfather, who was in the house, by winning the 7.49 class for the WWII veteran. A repeat winner was Ms. Sierra Eure in the EOPM Jr Dragster eliminator.

Finally, as most of you know, we have lost several great individuals from our sport in recent weeks. Joe Lapone, Jr. was overtaken by cancer. As most of you know, Joe was tapped to take over for the legendary Bill “Grumpy” Jenkins, winning many events and more recently became a much sought after tuner. Brian Olson was a terrific announcer, working most recently for the PDRA. And unfortunately, we lost Larry “Tater” Tutterow, of Carolina Drilling fame. Larry helped so many drivers and teams in our sport over the years. Remember the families of these three gentlemen in your thoughts and prayers, for the significant contributions made by Joe, Brian, and Larry. They will be missed.