Rising Pro Nitrous star Jason Harris (above) completed an almost perfect campaign Oct. 13, by going to his eighth final round in as many events this year and winning his sixth race to cap off a championship-winning run in the all-eighth-mile Professional Drag Racers Association’s (PDRA’s) inaugural season.

The Championship Finals, postponed by rain to Monday from a scheduled Saturday completion, was actually the second PDRA event to be settled at VMP over the weekend. Final eliminations for the PDRA’s Dragstock event at North Carolina’s Rockingham Dragway, also cut short by rain early in September, were wrapped up on Sunday (Oct. 12) within qualifying for the Virginia race.

Harris qualified his ’68 Firebird fifth and made it past Matt Suite, Stan Allen and Tommy Franklin to reach Chris Rini in the Switzer Dynamics Pro Nitrous final round. His win in the semis, however, stood out as payback for Harris after he lost the Rockingham final the night before when Franklin picked up his career-first Pro Nitrous race title with a new official PDRA record 3.737-seconds pass. That the semi-final win came courtesy of a holeshot that allowed Harris’ 3.770 at 191.81-mph pass to beat a quicker and faster 3.763 at 199.26 by Franklin made it that much sweeter for the Pittsboro, NC-based racer.

“I definitely owed Tommy one, but I also knew I would have to be sharp because he’d been so fast here all weekend,” Harris said. “Sometimes I get to bail out the car, but the car has had to bail me out a lot more often this year, but yeah, it’s always nice to help out my team and win at the tree.”

“I knew he (Rini) was right there with me, but the old ‘Warbird’ pulled through again,” Harris said. “We had everything thrown at it for that round, too, because we really wanted to finish this season with a win. I can’t say enough about my crew chief Robert Hayes and all my guys about how hard they all worked at this all year. To make it to every single final was pretty amazing and way more than any of us would’ve hoped for or even thought possible. This is a pretty special year.”

Brandon Snider of Atmore, AL, also enjoyed a good year, especially at VMP where he won both visits by the PDRA in July and October. For the Championship Finals Snider qualified on top of the 16-car NAS Racing Pro Extreme field with a 3.551-seconds pass.

When race day finally arrived, Snider’s ’63 Corvette painted a picture of consistency, running a trio of 3.59s in defeating Gene Hector (no show), Mustafa Buhamaid and Mike Recchia before going 3.586 at 211.26 in the final against number-two starter Jason Scruggs, who in his first final of the year made his weakest run of the day at 3.612 and 215.93 mph.

“I’ve changed the way I race this year. Instead of worrying about what my opponent might run and always trying to beat that number I’ve concentrated this year on getting a good, fast combination that I can repeat without tearing a lot of stuff up. I knew Jason could probably run another 3.56, but I planned for a .58 and told him he’d have to work for it on the tree if he wanted to beat me,” Snider explained.

Snider also vaulted past Scruggs to finish second in points, but on the strength of wins at Rockingham, Valdosta, GA, and Tulsa, OK, this year, Bubba Stanton in the Henson Motorsports ’69 Camaro was named the inaugural PDRA Pro Extreme world champion.

“I have to thank Roger Henson more than anyone for making this happen,” said Stanton, who won a similar title in 2006 with another sanctioning body. “It’s been a long road back, but my whole crew deserves credit for working hard and getting things done.”

New Jersey’s Anthony DiSomma was the only driver able to pull off the double at VMP and head home with both the Dragstock and Championship Finals trophies. After qualifying number one over 30 entries in Virginia for the 16-car Precision Turbo Pro Boost field with a 3.855 at a new official record 208.20 mph, DiSomma won the Rockingham portion of the weekend in a weird final against Larry Higgenbotham.

With both cars poised to launch, both left the line prior to the starting tree being activated. As announced by PDRA interviewer Brian Olson over the live online feed from the track, with no times or speeds recorded or posted to the track’s scoreboards the two drivers agreed to a rerun the next morning. However, upon official review later that evening by PDRA officials, it was determined Higgenbotham’s ’57 Chevy left first, thus disqualifying him first and automatically awarding the race title to DiSomma—no rerun required.

In Monday’s eliminations, DiSomma beat David Monday, Tommy D’Aprile (no show) and Kevin Rivenbark before facing off against newly crowned class champion Todd Tutterow in the final round. DiSomma’s win in the semis actually decided the PDRA Pro Boost championship as the closest challenger for the title to points leader Tutterow was his teammate, Rivenbark.

A pair of first-time winners split the Aruba.com Extreme Pro Stock titles in Virginia as Cale Aronson prevailed on Sunday in the Rockingham final over Richard Penland, who also made it to the Virginia final the next day to score his own career-first class win. Penland also qualified his 2010 Mustang in the number-one slot over the eight-car field with a 4.084-seconds pass at 178.21 mph.

When racing began, Penland dispatched Doug Kirk and John Pluchino from competition before facing off against number-two qualifier Brian Gahm in the final round.

Cary Goforth clinched the PDRA Extreme Pro Stock class championship in the opening round of qualifying on Friday (Oct. 10), before the rain started. Goforth, who was the number-one qualifier in Rockingham, needed only to make one pass for the Virginia event to wrap up the championship.

His off-the-pace 4.274 at 159.06 pass held up for the sixth-place position, but almost immediately after posting it he jetted off to the IHRA finale in Memphis, where the Holdensville, OK-based driver merely had to complete one qualifying pass that same night to also secure the 2014 mountain-motor Pro Stock championship in that series.

“It’s crazy but sometimes it takes crazy to get the job done,” Goforth said just before stepping aboard a waiting private jet with the engines running at nearby Dinwiddie County Airport.

“I know you’re not going to get a chance at winning two championships in one year very often, but in one day? That’s crazy! But crazy is what my dad (Dean Goforth, team owner and also an Extreme Pro Stock competitor), does best. This was all his idea and he set it all up and I am so thankful to him and my crew chief Jeff Dobbins and all of my team for all the hard work they put into this. I love them all.” 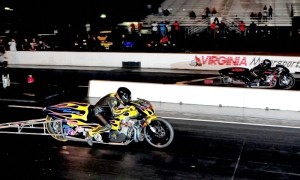 With three wins already heading into the weekend at VMP, Eric McKinney nearly had the PDRA Pro Extreme Motorcycle championship sewn up, with only teammate Ashley Owens having a slim mathematical chance to catch up. When both riders uncharacteristically fell in the second round of the delayed Rockingham event, however, McKinney knew the season title was secured.

Douglas, GA’s Travis Davis, who eliminated McKinney, went on to win his second race of the year, beating veteran Paul Gast in the Rockingham final.

With one more race to go, though, McKinney had an opportunity for redemption. He qualified his 2012 Hayabusa first for the Championship Finals with a 4.065-seconds pass at 176.42 mph, which turned out to be important as second-place starter Ron Procopio and third place Casey Stemper posted identical elapsed times so the top three were set by speed.

McKinney, from Hamersville, OH, made short work of David Rudd in the opening round of racing before earning a little payback with a close win over Davis in round two. He then made a solo pass in the semis when Gast was a no show to set up a race against first-time finalist Chris Garner.

“It’s a great way to end the year and I have to thank my dad (Scott), my Uncle Steve and Ashley (Owens) for getting us all here,” McKinney said. “We go out there alone as riders, but this is a team sport, there’s no doubt about that.”

The PDRA will crown its 2014 champions Dec. 13, at the inaugural PDRA Banquet and Awards Show at the JW Marriott hotel in downtown Indianapolis, held in conjunction with the annual Performance Racing Industry (PRI) trade show.