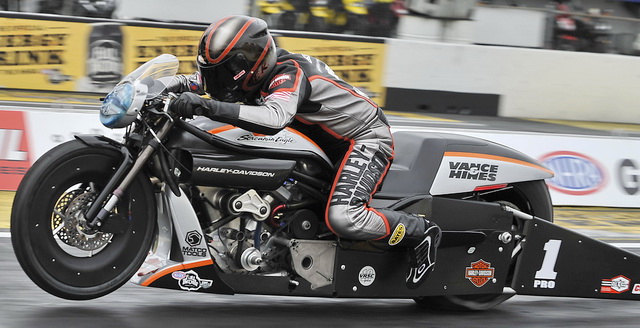 NHRA announced changes Sep. 19, to the Pro Stock Motorcycle category. For 2013, Harley-Davidson and Buell will both be allowed a maximum 160-cubic inch displacement (cid), for a 60-degree, two-valve, pushrod engine. Minimum weight for both motorcycles will be set at 625 pounds. The four-valve Harley-Davidson engine combination will no longer be allowed.

Suzuki will still have a maximum of 107-cid, for a two-valve engine. Minimum weight on the Suzuki will be 595 pounds. NHRA also will discontinue the four-valve option on the Suzuki motorcycle.

“We have been working on a long-term solution for the Pro Stock Motorcycle class for the last several months,” said Glen Gray, vice president of technical operations, NHRA. “Today’s announcement is part of our ongoing effort to provide great side-by-side racing for NHRA fans.”