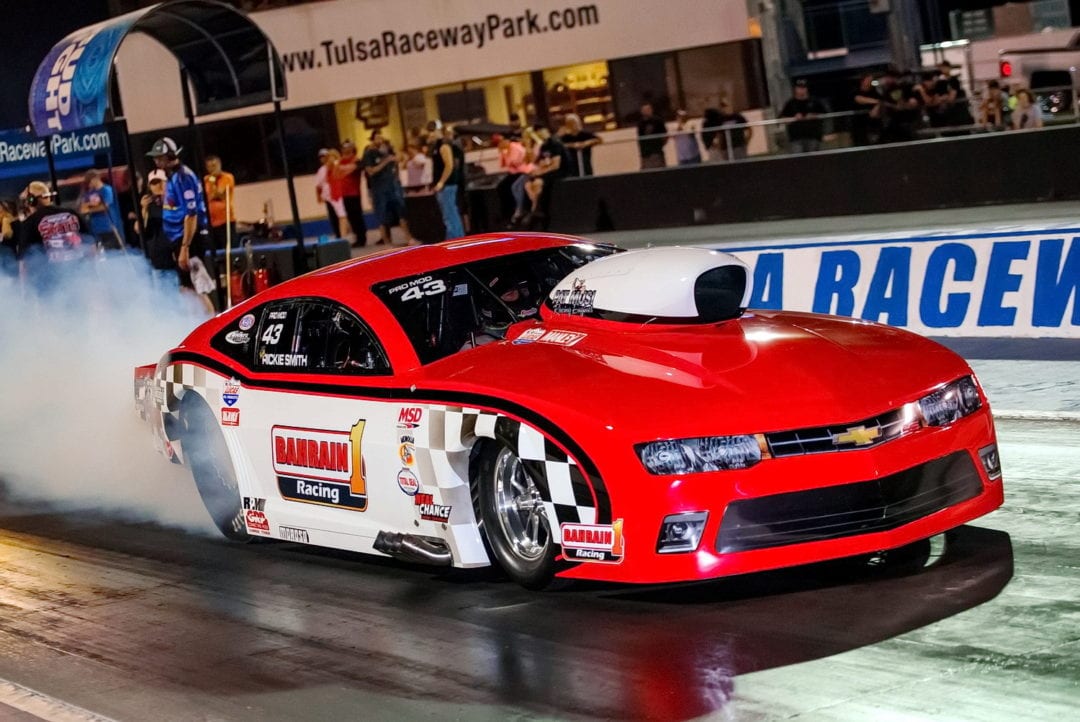 After more than three decades in drag racing, Tulsa businessman Keith Haney is ready to step onto the biggest stage of his career. This weekend (May 18-20), Haney will make his NHRA E3 Spark Plugs Pro Mod Series debut during the Menards NHRA Heartland Nationals presented by Minties at Heartland Motorsports Park in Topeka, KS.

“I couldn’t be any more excited about this,” Haney declared. “To have Summit Racing Equipment on my side and driving for Rickie Smith and Brandon Switzer, well, I really couldn’t ask for anything better. And this is the exact same car Rickie won with earlier this year down in Gainesville (FL), so it’s a proven winner—just like I am.”

“I won’t lie, it was challenging,” he admitted. “The winds were pretty strong that day; I had never driven a Jerry Bickel(-built) car before, so I sat a little different in it and the gas pedal was a little different from my cars; it had a transmission setup that I hadn’t used in years; and I hadn’t run the quarter mile in at least 10 years, which was back in my Top Sportsman days. Really, it was just a combination of little things that all added up to a lot more to think about.

“So I had some challenges and made a couple of missteps starting out, but my lights were great and Rickie and his guys were really helpful in every way and I was able to get it done. I ended up going 6.23 at 190 miles an hour, which even though I shut it off early was still the quickest I’d ever been in a quarter mile. And then at night I ran again and again lifted a little too early, but that’s okay because I went 6.12 to satisfy my two passes for the NHRA license.”

With that challenge met, Haney returned his attention to racing “Enigma,” his nitrous-boosted 2016 Camaro in Radial vs. the World with the Frankenstein Engine Dynamics Mid-West Pro Mod Series during the weekend’s Throw Down in T-Town event. He qualified second for the race, but fell with traction trouble in round one of racing against Mark Woodruff.

Haney normally would have raced “Notorious,” a nearly identical appearing car in Pro Mod, too, but instead lent it out to veteran racer Jim Sackuvich after Sackuvich suffered an accident during Thursday’s pre-race test session. Fortunately Sackuvich was uninjured, but his own nitrous-boosted ’69 Camaro wound up on its roof shortly past the Tulsa finish line.

“Jim is a great friend who has always supported me and the Mid-West Pro Mod Series just like he supports his own team, so I just saw this as an opportunity to help him out and promote the sport, too,” the defending MWPMS Pro Mod champion explained.

Beyond learning the car, Haney said he also was left feeling very impressed by the way Smith runs his race team, adding it gave him ideas to implement for his own Keith Haney Racing crew, also led by Switzer and Brandon Pesz.

“Truthfully, it really was something to see how organized Rickie and his team is,” Haney said. “The reason why he’s a champion is because he’s a champion before he even leaves his house to go to a race. He’s so meticulous. I mean, you can eat off of every piece of the darn race car.

“Seriously, the attention to detail is really something to see and that even extends to the top end of the track and all that they do even before we leave to go back to the pits. Rickie operates his team totally as a business and to be honest, I’m more than impressed.”

With the Throw Down in the history books, Haney is now focusing all attention on the coming weekend in Topeka. The car he’ll be driving was in Rickie Smith Racing colors for his licensing runs, but Kryptonite Kustomz in Broken Arrow, OK, was busy this week applying a unique, red-white-and-blue Summit Racing wrap that Haney recently described to NHRA’s Lewis Bloom as “cocky,” to further bolster his confidence in entering the ultra-competitive NHRA Pro Mod arena.

“When we come out they’re going to know my name, I can promise you that,” he concluded.