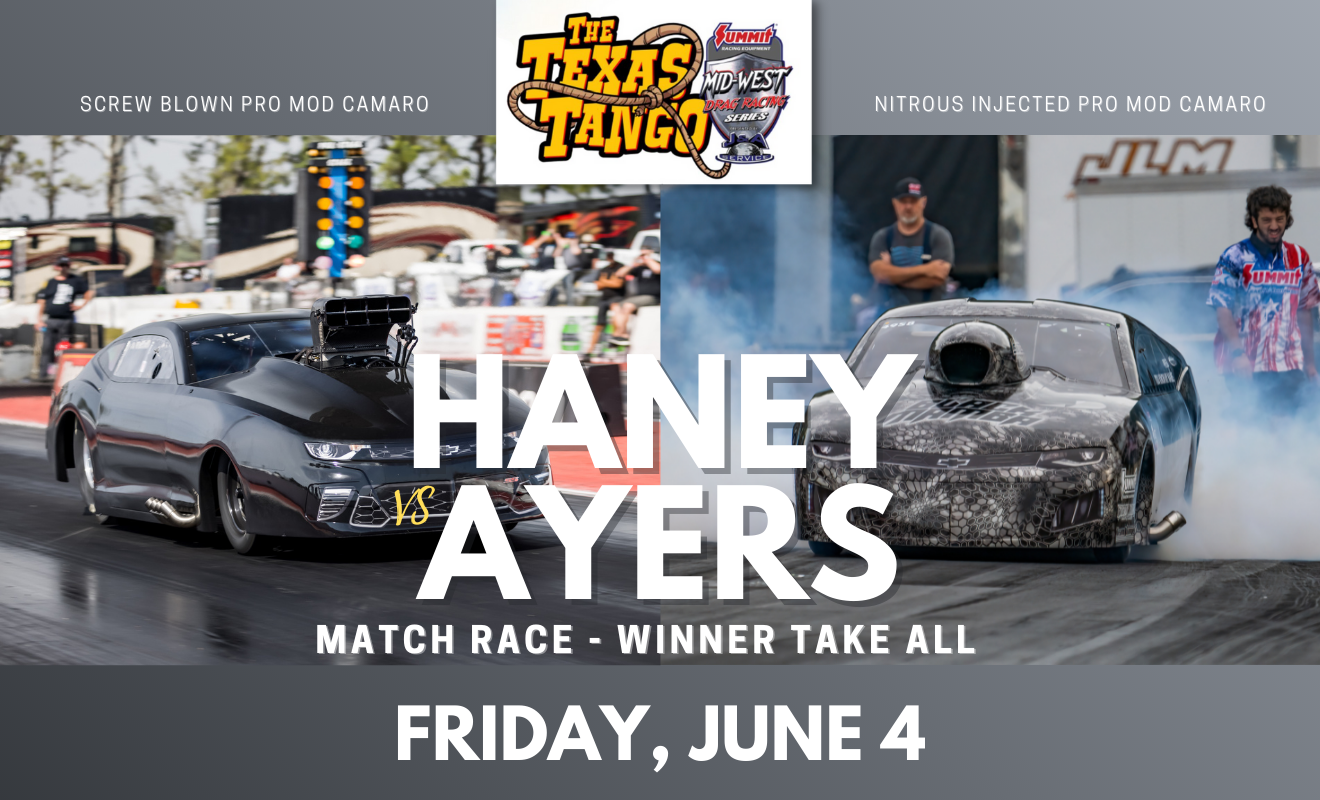 Keith Haney is quick to point out he’s been friends with NFL star Fletcher Cox and Shawn Ayers for a long time. But there’s nothing wrong with a little friendly competition— and putting some extra cash on the line to see who has the quicker Pro Mod.

With the Mid-West Drag Racing Series heading to Houston Raceway Park for the first time at this weekend’s Texas Tango Nationals, Haney, Cox and Ayers have upped the stakes to make an immediate impression.

Driving “Black Mamba,” his nitrous-injected ’19 Camaro, Haney will take on Ayers, who is campaigning Cox’s blown ’20 Camaro, in a special match race during the first qualifying session on Friday. There’s $2,500 on the line to kick off the MWDRS’ debut in Houston, though Haney joked side bets will likely have that well over $10,000 by the time they line up on Friday.

“Fletcher and I have been friends for a long time. They decided to come and play in the Pro Mod field,” Haney said. “At the end of the day, he thinks he’s better than I am and he thinks Shawn is going to take me out. We’ve been texting back and forth, and it’s been pretty fun. We’ll have some fun with it.”

Ayers, a radial standout who has already made an impressive impact in Pro Mod by winning his debut earlier this year, has enjoyed the banter, offering his own take on what will happen Friday.

Haney is never one to back down from a match race and he does have history on his side. He knocked off Ayers in eliminations in Radial vs. the World at No Mercy in 2015, and Haney plans on being just as successful this weekend.

“Last time we raced, I put him on the trailer,” Haney said. “This time, they might get so embarrassed they just pack up and leave.”

The only thing Ayers plans on doing is continuing his Pro Mod success. Cox and Ayers have looked strong since switching over to big tires earlier this year, winning the NMCA season-opener in Bradenton at their Pro Mod debut.

Ayers dipped into the 3.50s, which certainly turned some heads, going 3.58 at more than 215 mph. The adjustment to racing in Pro Mod took some time, but he’s become quickly acclimated and noted there was plenty left in the Camaro after the 3.58 run.

Still, having a match race right off the bat on Friday will be a challenge for both drivers. To add to it, MAVTV will be live-streaming the match race as part of their impressive Mid-West Drag Racing Series coverage, adding an even bigger spotlight to the festivities.

But through his extensively successful career, Ayers has learned to stay focused on what he can control.

“I’m looking forward to it. We’re all good friends and this is always good to add something extra, but it doesn’t change anything up for me,” Ayers said. “I just go through my routine, do my job and hopefully I’ll come out on top. But you just have to run your own race and worry about your lane. That’s the way I look at it.”

Haney, though, often thrives in this type of spotlight — and he welcomes it, in fact.

It usually doesn’t get as many cheers from the rest of his team, including star tuner Brandon Switzer, but Haney has proven to be up to the task on multiple occasions. He also doesn’t expect that to change when he lines up against Ayers on Friday at Houston Raceway Park.

“I love it. This just make for fun for me,” Haney said. “Does my tuner like it? Absolutely not, but at the end of the day I have that much faith in my tuner that I’m going to be able to come out on top.”

As expected, Ayers sees things much different, and with a laugh, offered one final retort for what he believes will be his own winning run on Friday.

“Hopefully we come out on top, dip into the 3.50s and dump those chutes in Keith’s face,” Ayers said.