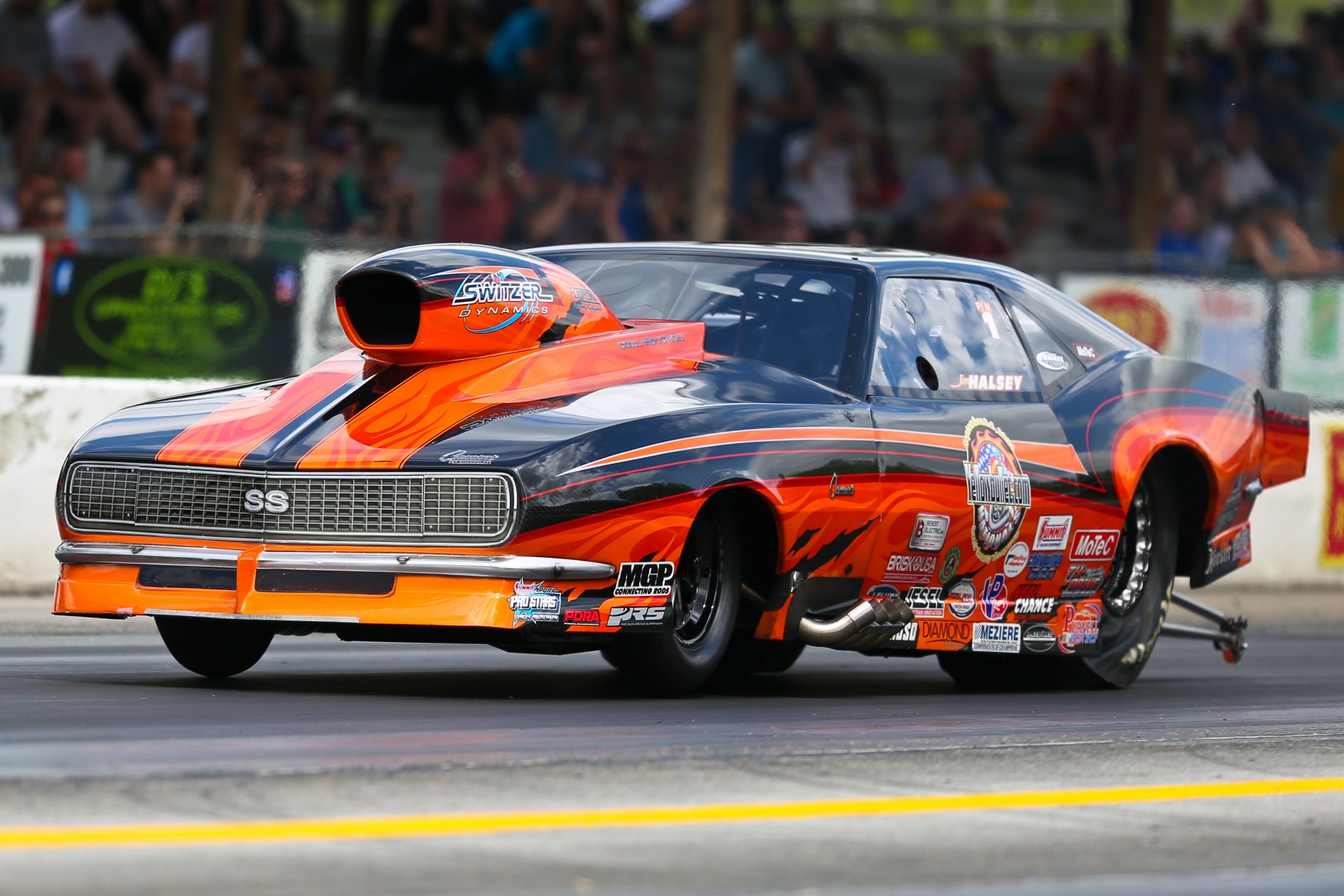 The Jr. Dragster event wins went to a pair of Virginia-based racers, Chris Suppers in Coolshirt Systems Pro Jr. Dragster presented by PRP and Gavin Wood in Classic Graphix Top Jr. Dragster presented by PRP. Suppers cut a .007 reaction time to get the starting line advantage and followed through with a 7.934 to defeat Danika Miles and her 7.915, both on a 7.90 index. Wood also had the starting line advantage against Hannah Sheppard, winning with a 9.016 on an 8.99 dial-in over Sheppard’s 12.121 on a 12.00 dial-in.

In Edelbrock Bracket Bash presented by COMP Cams, Brandon Frame won in the final round in his Nashville-based ’11 Racecraft dragster. He ran a 4.931 on a 4.93 dial-in to beat Blake Gentry, who went red by .004. 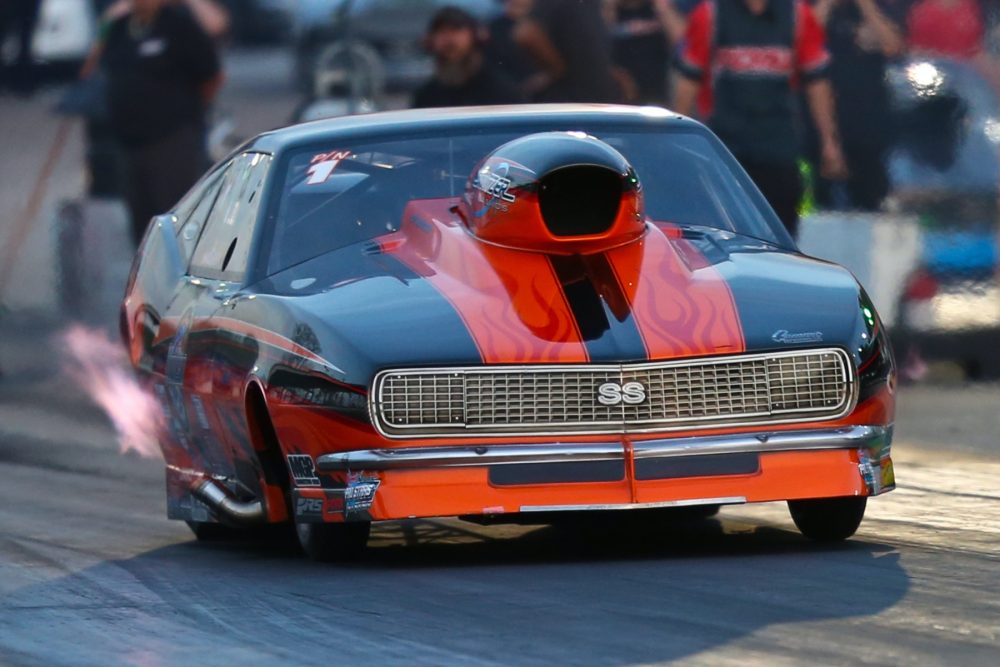 It didn’t take Jim Halsey and his Brandon Switzer-led team long at all to bounce back from a first-round exit at the season opener. The three-time and defending Pro Nitrous world champion qualified No. 2 and fought through eliminations, eventually taking the win over East Coast Nationals winner Mike Achenbach in an all-Switzer-tuned final round. Halsey took a slight starting line advantage and didn’t look back, powering through to a 3.688 at 206.54 in his Fulton-powered, Bickel-built “Daddy Shark” ’68 Camaro to beat Achenbach’s 4.71 at 110.40.

“With all the hard work we put in between then and now, this is pretty rewarding,” said Halsey, who thanked his team, which includes Brandon and Melissa Switzer, Eric Davis, Michael McMillan, and Cathy Crouse. “We tested for a couple days. We spent four or five days working on the car. It was completely disassembled. The semifinal bye run wasn’t impressive numbers-wise, but we figured out some stuff there. The car is back where it likes to be.”

“We were talking about that, and Cathy was like ‘We finally won a race,’” Halsey said. “We were kind of spoiled last year. But I think we have something to build on going forward. That’s the oldest engine we have in the trailer. Maybe we’ll try one of the newer ones at the next race.” 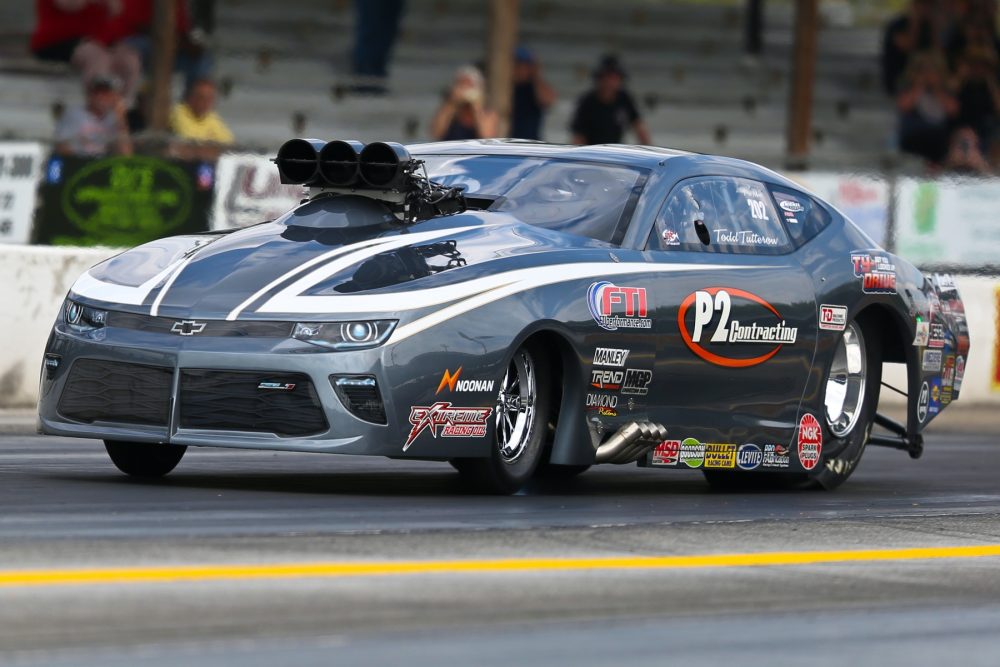 It was a back-to-back winning weekend for Pro Boost veteran Todd “King Tut” Tutterow, who scored his second consecutive Doorslammer Derby victory and second consecutive win of the season in his screw-blown P2 Contracting ’20 Camaro. In the final round, Tutterow recorded a 3.651 at 209.43 to beat the 3.697 at 197.57 of Preston Tanner, who left first on Tutterow in his first final-round appearance in Pro Boost.

“I’m very, very excited about everything,” said Tutterow, thanking teammate Kurt Steding, the P2 Racing team, FTI Performance, and Hank Thomas Performance. “Like I said at GALOT, if you don’t win the first one, you can’t win them all. It’d be nice to win them all. At the last race, I had Stan Shelton in the finals and he’s not running the whole series. This gives us good momentum going into the rest of the year.”

“It’s a win-win situation,” said Tutterow, who won the inaugural PDRA Pro Boost world championship in 2014. “He’s a good customer of mine. It’s good to see that he has good products and he’s running really well. I’m very excited for them too.” 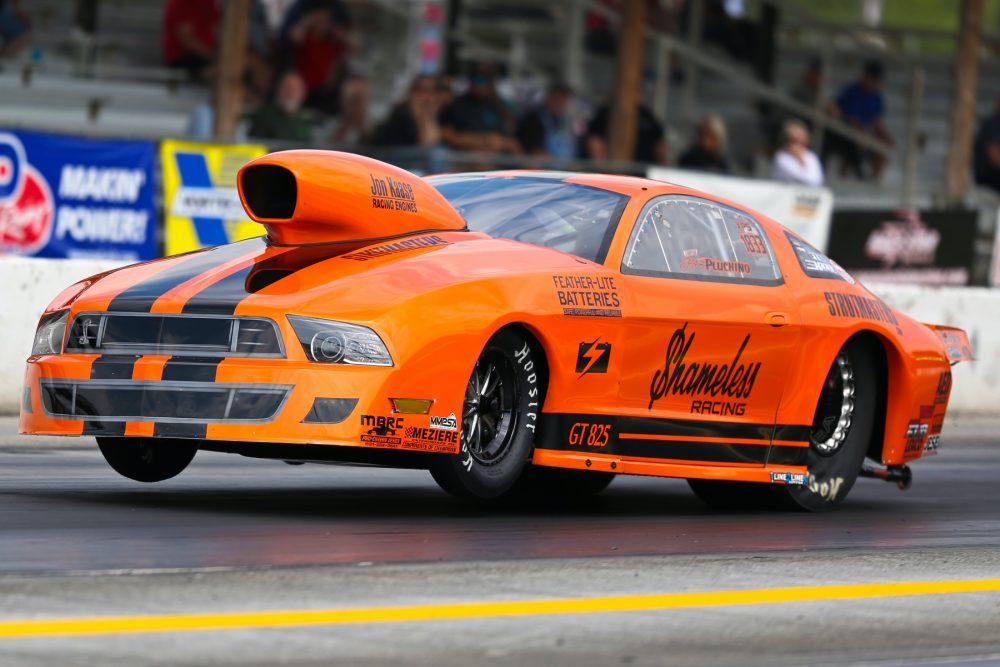 Johnny Pluchino, the 2020 Extreme Pro Stock world champion, rolled into the Doorslammer Derby looking for redemption after a second-round red light at the season opener. Sure enough, he redeemed himself, stringing together a series of round wins in his father’s Kaase-powered $hameless Racing ’13 Mustang to get his first points race victory in over a year. Pluchino left the starting line first and held the lead against No. 1 qualifier JR Carr, finishing with a 4.086 at 178.73 next to Carr’s 4.087 at 177.58.

“It feels like our first win all over again,” said Pluchino, who thanked $hameless Racing, Feather-Lite Batteries, Strutmasters, AED Competition, Jon Kaase Racing Engines, and Ram Clutches. “We struggled with the car a little bit last year and we got it back together. I goofed at the first race and I feel like I let my team down. I was heartbroken until we got here. Hopefully I redeemed myself. The crew worked their tails off. I’m just thankful for my sponsors and everybody who jumped on board to get us back out there this year. We did it. From my dad, Brud, Rich, John, everybody who was here – we’re one big team. We go down together and we win together. I’m stoked. I can’t thank everyone enough.”

Pluchino qualified No. 2 before running a 4.091 at 177.77 to beat Mike Baessler in the opening round. Second-round opponent Tony Gillig went red on a 4.106, while Pluchino lifted to a 7.707 at 68.45. Pluchino won on the starting line again in the semifinals when John DeFlorian went red on a 4.084 to Pluchino’s 4.111. But it was Pluchino’s performance in the final round, especially the .015 light, that has Pluchino’s confidence back up.

“I came out here and said I put too much pressure on myself at the last race,” Pluchino said. “I decided to have some fun this weekend, and we’re having some fun right now.” 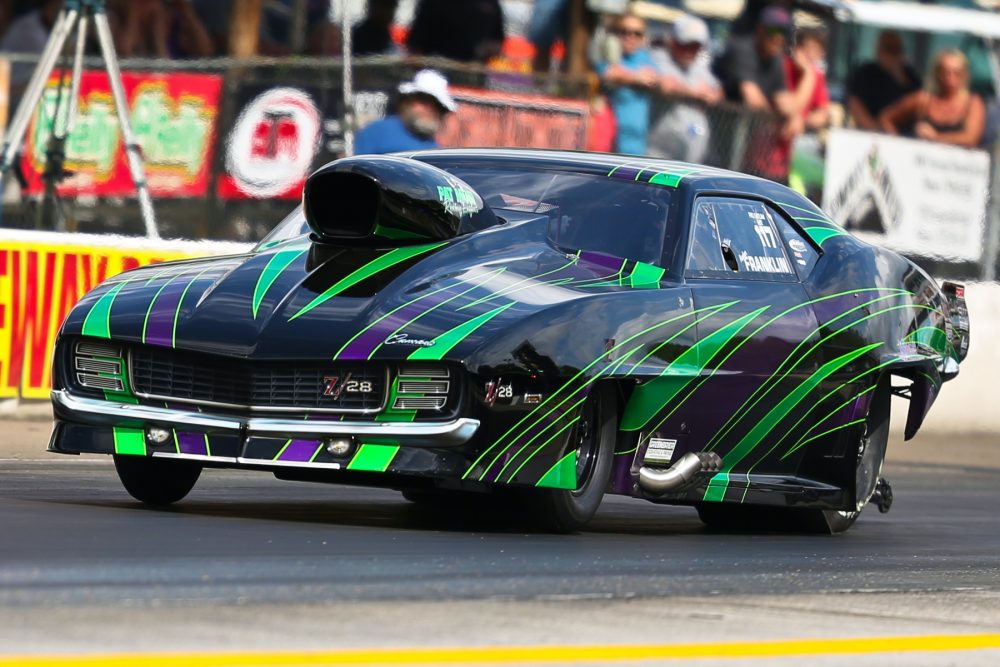 The Pro 632 final round was a victory for the PDRA Jr. Dragster community, as two graduates of the program faced off in the first all-female final round in the history of the class. Amber Franklin, the 2017 Pro Jr. Dragster world champion, squared off against her longtime best friend and the 2015 Top Jr. Dragster world champion, Lexi Tanner, in the final. Driving the Musi-powered “OG Jungle Rat” ’69 Camaro that her father, Tommy Franklin, drove to back-to-back Pro Nitrous world championships, Franklin came out victorious. She used a 4.182 at 170.62 to overcome the holeshot advantage by Tanner, who ran a 4.238 at 167.68. It was Franklin’s first Pro 632 win in just her fourth start in the class.

“This one is definitely big,” Franklin said. “I made a Facebook post a couple years ago that I dreamed to someday drive this car. I’ve watched my dad win in it for many years. It definitely feels great. I want to thank my parents, the good Lord above, my crew, Pat Musi Racing Engines, Jerry Bickel Race Cars, Hoosier Racing Tires, M&M Transmissions, Jeff Pierce Tuning – there’s a whole lot of people that made this possible. They definitely saved me in the finals, but there was no better way than to have it with Lexi.”

“We’ve been to a couple finals now and we keep saying, ‘When is it our turn?’ but God has a plan and a purpose, and I know that it was to run against [Tanner],” Franklin said. “We’ve been best friends for 10 years now and we’ve talked about this day for a long time. It felt really, really good to run with her in the finals.”

Tanner, the sister of Pro Boost runner-up Preston Tanner, entered eliminations from the No. 8 spot in her family’s Jeff Pierce-tuned, Oakley-powered ’15 Camaro. She ran a 4.285 at 167.14 next to a red-lighting Chris Holdorf in the opening round, then improved to a 4.261 at 167.03 to win over No. 1 qualifier Walt Lannigan Jr., who also went red. A side-by-side race followed in the semifinals, where Tanner scored the win over the most recent winner on tour, Alan Drinkwater, in a 4.241-to-4.254 race.

The Elite Top Dragster final round came down to a dragster and an Altered, as Kyle Harris in his supercharged KHR ’32 Austin Altered lined up against Nick Hamilton in his ’20 Diamond dragster. Hamilton was quicker at the starting line, but he was too quick at the eighth-mile finish line, breaking out with a 3.798 on a 3.80 dial. Harris was ready, though, with his winning 3.849 on a 3.84 dial-in.

An NHRA sportsman standout and a past PDRA world champion squared off in the Top Dragster 32 final, with multi-time NHRA national event winner Nick Isenhower laying down a .002 light and 4.454 on a 4.45 dial-in in his ’15 American dragster to knock out 2020 PDRA Top Sportsman world champion Stacy Hall, who had a .005 light and a 4.364 on a 4.36 dial-in in his Fulton-powered ’21 American dragster.

The PDRA will have a month off before returning to action May 26-28 at the DeCerbo Construction American Doorslammer Challenge presented by Callies at Summit Motorsports Park in Norwalk, Ohio.