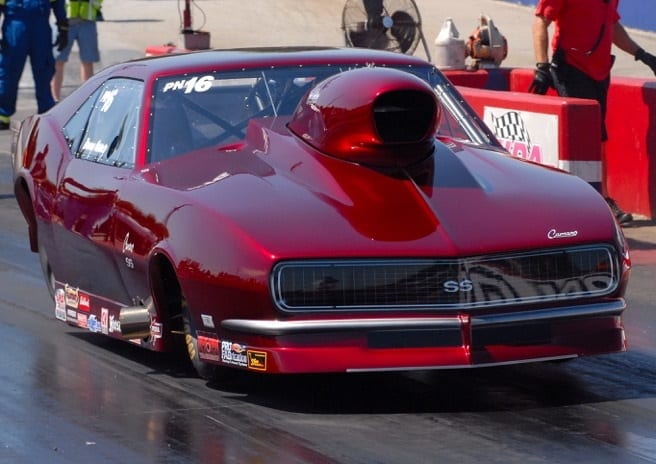 June has brought heat and humidity to the Carolinas and that means thunderstorms, delays and unsure conditions for track operators. Thus was the scene at historic Piedmont Dragway on the second Thursday in June, as the first Thursday was a wash. As the first round of qualifying approached, drivers and crews were doing their usual routine of settings and tuning for what would be a difficult surface to hook up to. That is, everyone except the NC Hall of Fame member, Tommy Mauney. His nitrous Camaro, sporting Pat Musi power, was setting on the ground ready for first round of qualifying while everyone else was thrashing at a fever pitch.

Eliminations started with Harris’ teammate, Travis Harvey, getting a single only to break himself. Mauney defeated Billy Albert, Jeff Blasi won over David Campbell, and Jason Harris ran low ET of the round at 3.866 to defeat Bubba Turner. This set up the race everyone has wanted to witness all season with Harvey and Harris lining up their team cars, both tuned by Robert Hayes. In the end Harvey used a 3.837 with an .025 light to nick Harris’ 3.855 with a .008 light. Needless to say, everyone got their money’s worth on that race alone. In the other semifinal match, Mauney took out Blasi with a 3.871 to Blasi’s off-pace 6.033. In the final, the veteran, Mauney went 4.23 with an .018 light to defeat Harvey’s 4.798. Both off-pace, but the win went to the Camaro that Mauney built and tuned to a victory. All this becomes more important with Piedmont’s announcement that the top 4 in points in Big Dog and EOPM will be automatically qualified for the Lucas Oil-sponsored, $15,000 to win, Lucas Pro Mod Shootout, again this year to be held in October. With the July and August Big Dog races both a combo with the EOPM series, every round win will be of the greatest importance. Look for fields to be full plus for the next two events. 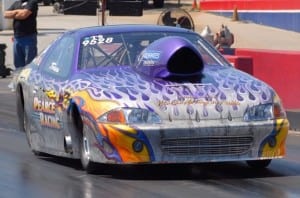 Super Clean Renegade was also a group with traction challenges with Tim Lawrence on the pole with a 4.167, Brett Nesbitt at 4.180, John Lassiter at a 4.183, and Brian Schrader at a 4.204. The rest of the field included Larry Pearce, Charles Richards Jr., Cam Clark, and Jamie Chappell. In a great final run, Larry Pearce got his first win of the season at a 4.224 with a .015 light over Brett Nesbitt’s 4.212.

In another announcement, GM Kevin Shipmon made the announcement that two of the stars of the hit Discovery Channel show, “Street Outlaws” will be at historic Piedmont Dragway in August. “Doc” and “Monza” will square off in a best of three match race.

Other winners for the evening included Chad Duke in 6.00, Brendon Hutchins in Outlaw Door Slammers, and Don Cassidy in 7.49 Real Street.