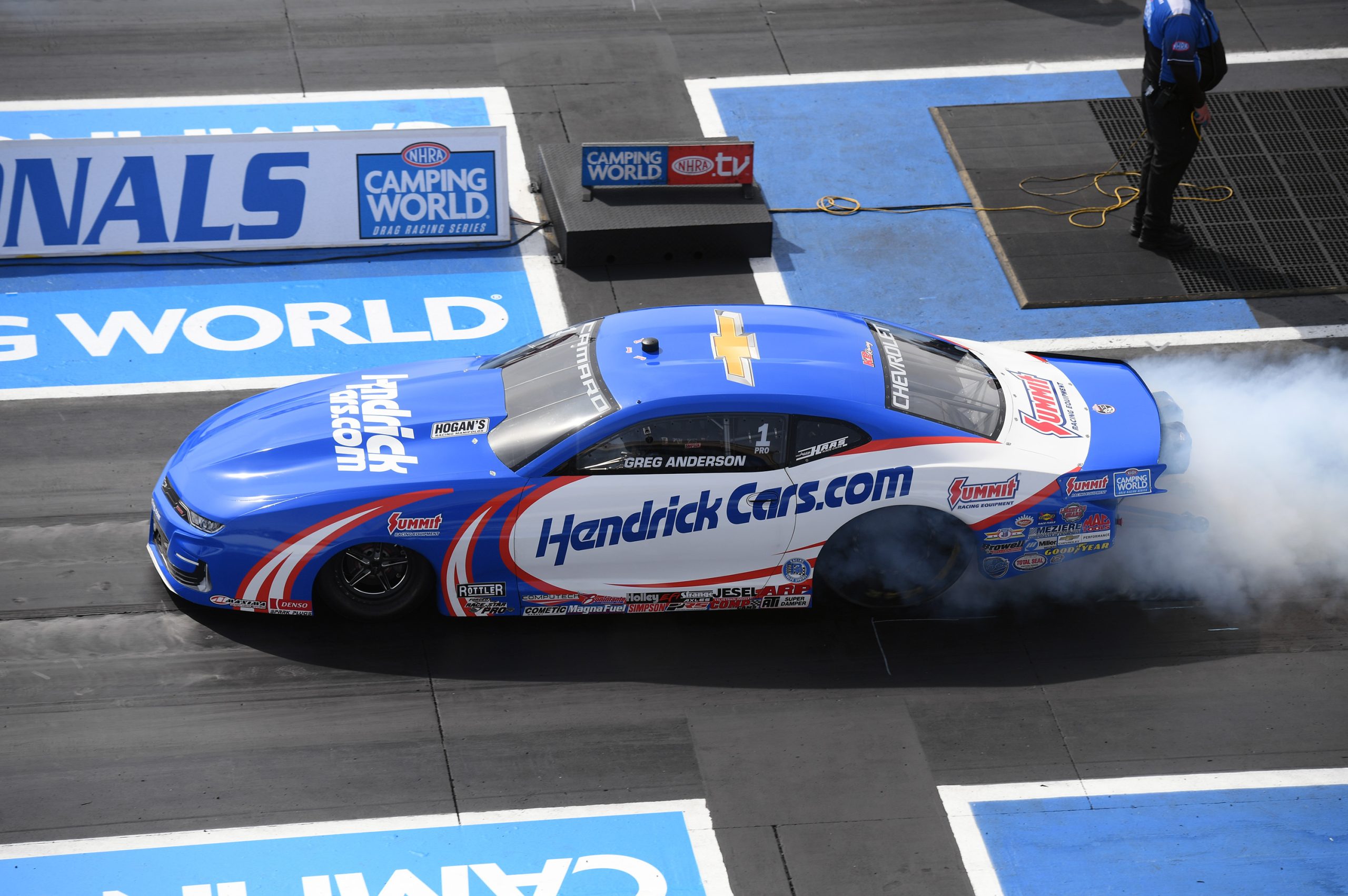 The HendrickCars.com Chevrolet Camaro hasn’t yet shown its full capabilities this year, but reigning Pro Stock world champion Greg Anderson saw a turn in the right direction at this weekend’s NHRA Arizona Nationals in Phoenix. Anderson qualified in the top half of the field and claimed a lucky win in the first round before seeing an increase of pace on Sunday at Wild Horse Pass Motorsports Park.

“We had a good car on Friday for the first round of qualifying, but then somehow we de-tuned her overnight, and Saturday was not what we were looking for,” said Anderson, who claimed a bonus point on Friday night as the third-quickest car of the session amongst a gang of 19 Pro Stockers vying for the 16-car field. Anderson fell from the No. 3 spot down to the respectable yet not quite as shiny No. 7 position.

In the first round of eliminations on Sunday at a race where Anderson has won twice, his racecar shook and slowed next to a red-lighting Dallas Glenn.

“I got lucky there, but it gave me the opportunity to move on and see if we could extract a little more from our HendrickCars.com Chevy,” said Anderson.

The 99-time national event winner drew young Aaron Stanfield for round two, and the pair were well-matched. Stanfield left the starting line first by just .004-second, and at the finish-line stripe, the young gun was ahead of the veteran with a 6.534-second pass at 210.83 mph to narrowly defeat a 6.537, 209.33. The margin of victory was just seven-thousandths of a second.

“I’m disappointed. Aaron gave me room, and we had a good shot to sneak by,” said Anderson. “We could have won that race, we could have won the next round, and we could have won the race. But coulda-shoulda-woulda doeesn’t mean a whole lot. What matters is what happens at the end of the day. We made a nice, quality run there, but it’s still not where it needs to be. The good news is that it’s coming around.

“We have a week off, and rather than try to go testing in that small window before the next race, we’re going to go home, add it all up, and clean up some of the details. I was happy with my racecar today, and I really, truly expect that we’re going to perform better down there in Gainesville.”

The next event for the NHRA Camping World Drag Racing Series Pro Stock competitors will be the Amalie Motor Oil NHRA Gatornationals at Gainesville Raceway in Gainesville, Fla., Mar. 10-13, 2022.