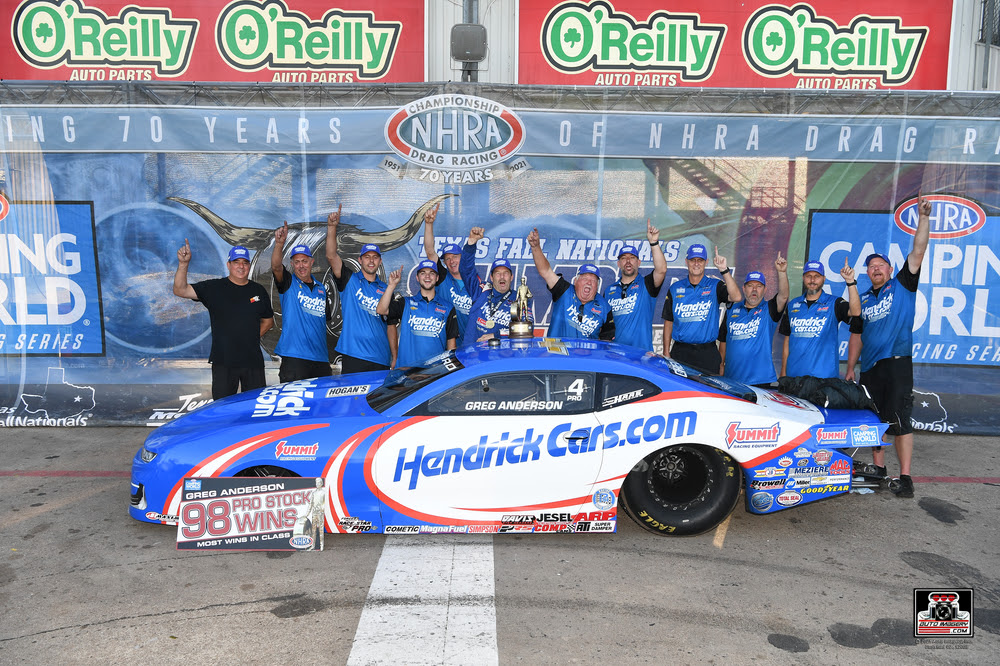 The 2021 season of NHRA’s Camping World Drag Racing Series has been history in the making for Pro Stock driver Greg Anderson, and finally, with victory at the Texas NHRA FallNationals, it was chiseled in stone. Anderson became the most winning driver in the history of the class with a final-round defeat of Texan Chris McGaha, securing the 98th trophy of a career that began in Columbus in 1998.

“I couldn’t have imagined one win, but here we are, 98 later,” said an elated Anderson at the top end of the racetrack after emerging from his HendrickCars.com Chevrolet Camaro. With the win, Anderson also moved up to a prestigious position for wins across all Professional NHRA categories. His 98 trophies are second only to Funny Car icon John Force, who has 154.

“What a run. I seem to get all the glory, but it’s not me, it’s this KB Racing team, it’s our wonderful team owners Ken and Judy Black, it’s Rick Hendrick and HendrickCars.com, it’s Summit Racing Equipment. I never thought this day would come, but the Good Lord was looking out for me. To my wife, Kim: Honey, tonight I’m coming home with our 98th trophy.”

No. 1 qualifier Anderson earned his sixth win at Texas Motorplex – the most of any other driver in the category – with early round wins over Marty Robertson, Matt Hartford, and Troy Coughlin Jr. In the final round, McGaha was overly eager in his quest for triumph at his home track and turned on the red light by .014-second. Anderson powered to a 6.624-second victory lap at 206.32 mph.

The timing of his historic win couldn’t be more fitting. This season is the 20th anniversary of Anderson’s first win, which came at Bristol Dragway for current team owner Black and then-partner George Marnell.

“I’ll remember that until the day I die,” said Anderson. “I was not expected to win, but we got it done driving a black Firebird. Everyone said, ‘he’s a flash in the pan, he’ll never win again.’ But here we are.”

In addition to the historic victory in Texas, Anderson extended the points lead that he’s held for the entire season. He is now 81 marks ahead of second-best Erica Enders as he chases the fifth Pro Stock series title of his career. There are two races remaining before the Pro Stock championship is decided.

“We don’t come for show. We come to all these races to win,” said Anderson. “That’s always our goal, and there is no feeling like winning one of these events. We got it done today at Texas Motorplex.

“Going back to the beginning, I never thought I’d see one win, let alone 98. That is a big number, and what a career it’s been. The best part of the whole deal, though, is that I don’t feel like I’m done yet. I still can’t wait to get to the next one.”

Pro Stock will next be contested at the Dodge//SRT NHRA Nationals presented by Pennzoil at The Strip at Las Vegas Motor Speedway, October 29-31, 2021. The NHRA Finals will take place at Auto Club Raceway at Pomona, November 11-14.