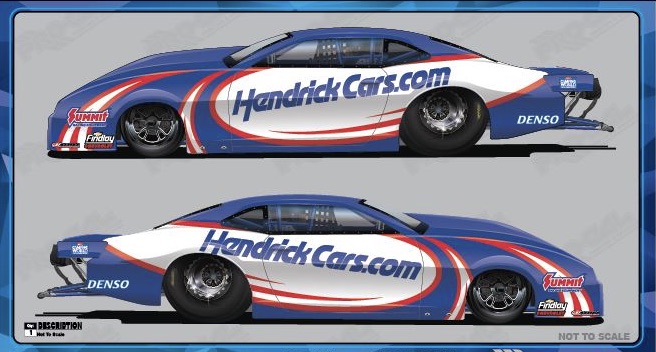 Fresh off of a historic Pro Stock victory at the final NHRA national event at Atlanta Dragway, Greg Anderson is fired up. The four-time NHRA Camping World Drag Racing Series champion now owns 96 trophies and is just one win short of tying Warren Johnson on the all-time win list in Pro Stock. Anderson will have even more incentive to close the deal as he debuts a very special wrap on his KB Racing-powered Chevrolet Camaro at the upcoming NGK NTK Four-Wide Nationals at zMAX Dragway in Concord, North Carolina, May 14-16, 2021.

The HendrickCars.com graphics on Anderson’s Chevrolet will pay homage to Ricky Hendrick, and the blue and white design is similar to what the gone-too-soon driver campaigned in the NASCAR Camping World Truck Series (formerly the Craftsman Truck Series) and the XFinity Series (formerly Busch Series). Ricky Hendrick, the son of Rick and Linda Hendrick, lost his life in a plane crash on October 24, 2004, alongside seven friends and family members. 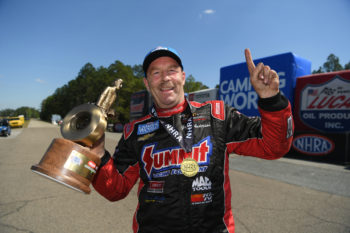 “Our Chevy will have a very special look, one that is meaningful to the Hendrick family, and we don’t take the honor lightly,” said Anderson, who will join Hendrick Motorsports NASCAR driver Kyle Larson in wearing Ricky Hendrick’s race colors in competition with the HendrickCars.com design.

“I really, really want to do a good job, not just for KB Racing, but for Rick Hendrick and their family,” Anderson continued. “I’m counting down the days until we get to zMAX Dragway and I get to drive this HendrickCars.com Chevrolet Camaro down that dragstrip.”

Hendrick Motorsports team owner Rick Hendrick is at the helm of Charlotte-based Hendrick Motorsports as well as Hendrick Automotive Group, which includes nearly 100 locations across 13 states and has thousands of vehicles for sale. The cars can be viewed online at HendrickCars.com.

Anderson has two wins in three races and has been No. 1 qualifier at each event so far in 2021, and he expects to continue the trend at the racetrack that he considers home. Anderson, originally from Duluth, Minnesota, took up residence in the heart of North Carolina’s NASCAR country in 2002, when he moved south to start KB Racing with team owner Ken Black in Mooresville.

“We’re surrounded by folks from the round-track world down here, and you end up crossing paths, getting to know them, and becoming friends. That’s one of the neat things about living here,” said Anderson.

“You meet a lot of great people with common interests, and Rick Hendrick is certainly one of them. We’re grateful that he’s offered to come on board for the race at zMAX Dragway and allow us to run our car with this beautiful look. It’s just so special to be able to honor Ricky, and the best way to do that will be to put that HendrickCars.com Chevy Camaro in the winner’s circle.”