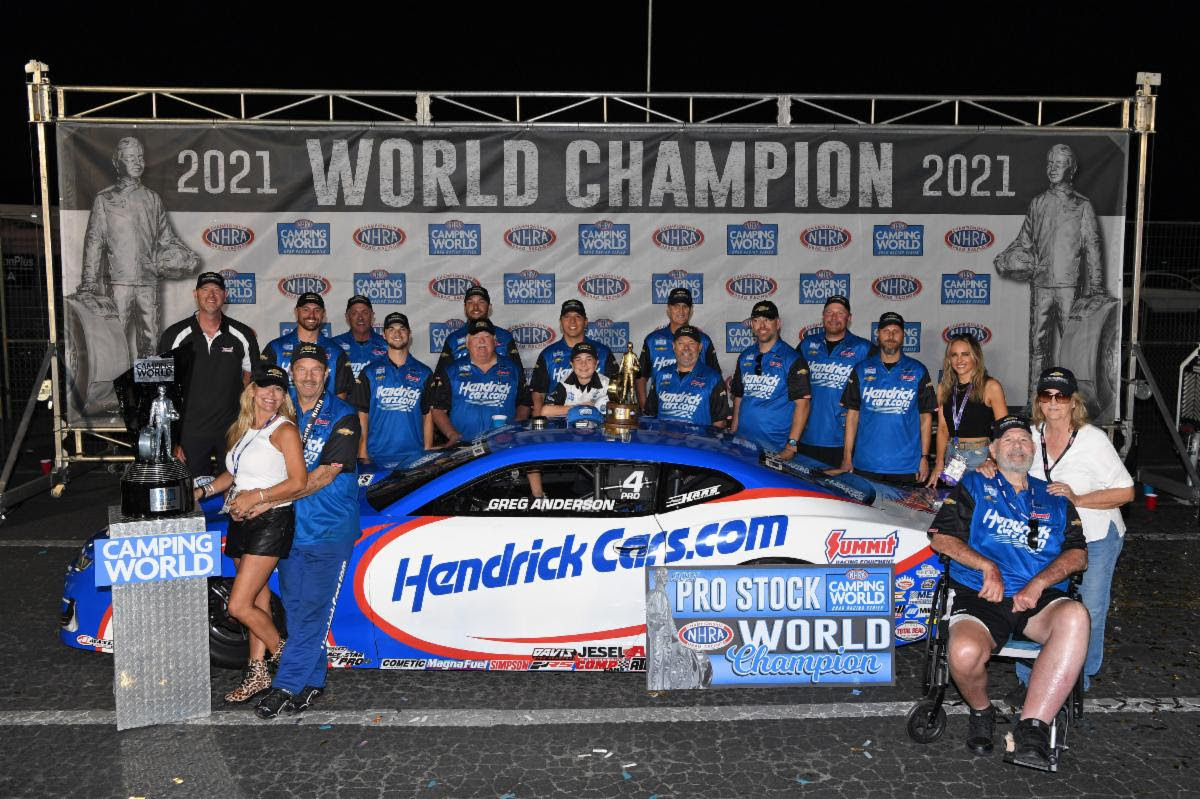 Greg Anderson came into the 2021 season of NHRA’s Camping World Drag Racing Series with the weight of uncertainty upon his shoulders, but on Sunday afternoon at the season-ending Auto Club NHRA Finals, one thing was absolutely certain: Greg Anderson was the champion, for the fifth time in his historic Pro Stock career.

“This HendrickCars.com Chevrolet is the meanest racecar I’ve ever had in all the years I’ve raced,” said Anderson, who won his first national event in 2001 and earned four previous championships in 2003, 2004, 2005, and 2010. “Right off the trailer, it was fantastic, and it never skipped a beat. I’m very proud of everybody on the KB Racing team and so grateful to our team owners, Ken and Judy Black. We definitely came prepared to race, and it paid off in the best possible way.”

Anderson and his HendrickCars.com Chevrolet Camaro dominated throughout the entire season, never relinquishing the points lead – not even once – and winning five races in nine final rounds over the course of the 17-race NHRA Camping World Drag Racing Series. A falter two weeks ago in Las Vegas that resulted in his only early exit of the season took a chunk out of his sizable lead, but after three incredible rounds of qualifying at Auto Club Raceway at Pomona, he had made up enough ground to put two rounds between himself and the No. 2 driver, Erica Enders.

“Having the best car adds pressure,” admitted Anderson, who claimed maximum bonus points as the driver with the quickest Pro Stocker in each of the three qualifiers. “Everybody knows that my HendrickCars.com Chevrolet Camaro has been the best out there, race in and race out. I hated the thought of not capitalizing on what I had. This weekend, my Chevy was the best it’s ever been, but so many things can go wrong – especially at the last race of the year.” 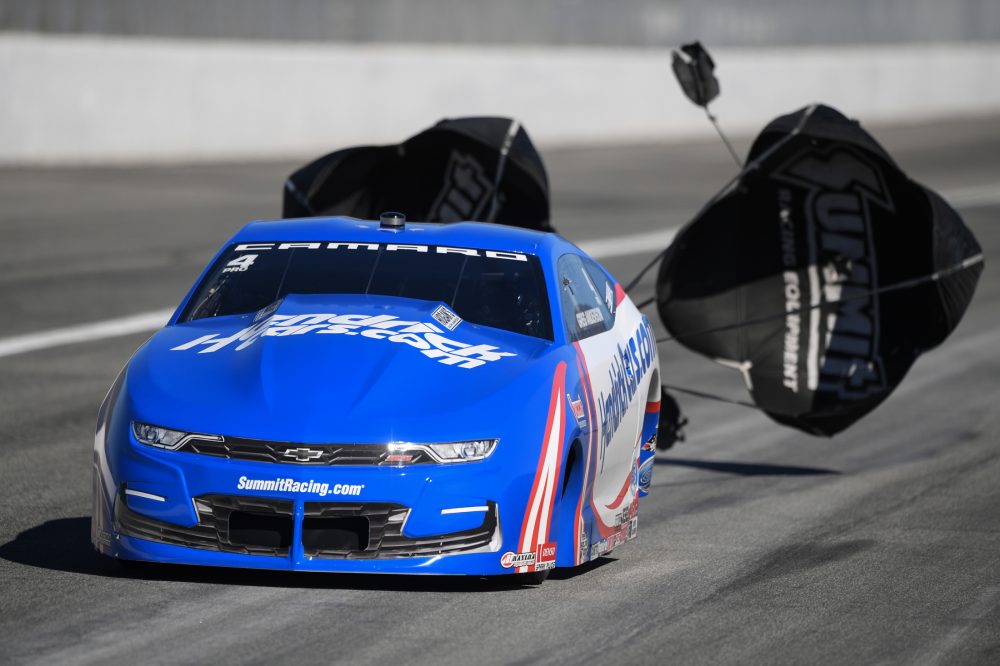 Anderson knows that painfully well as he lost two consecutive championships by a handful of points at the final race of the year. In 2017, it slipped away by seven points. In 2016, the championship fell through his grasp in the final round of the final race by three teeny tiny points.

Heading into Sunday, Anderson – the most winning driver in the history of Pro Stock – knew what was at stake and had a ladder with the potential to place fate in his own hands. He and Enders were on the same side, and if they won their respective first- and second-round matches, they would meet in the semifinals.

Both drivers were set on kill, but it was Anderson with the win light as his opponent’s racecar broke loose ever so slightly from the racing surface and inadvertently scrubbed precious time. Anderson’s victory was with a clean 6.578-second journey down the quarter-mile at 208.23 mph to 6.742, 206.92.

“You better not look over or worry about who’s in the other lane – Erica is bad-to-the-bone, she’s a mean driver, and she easily could have been the champion,” he said. “But you can’t think about that, because all it’s going to do is mess with your head. You don’t want to think about how big of a round it is until you pass those scoreboards down there.”

After a brief championship celebration, Anderson and his team raced back to the pits to prepare for the final round. There, Anderson was set to race his teammate, Kyle Koretsky.

“I definitely didn’t expect that,” said Anderson, chuckling self-deprecatingly as he acknowledged that he hadn’t exactly been stellar at the starting line earlier in the day. “I guess you could say that after winning the championship the round before, it just became fun. The pressure was off, and it was just about going out there and racing for fun.”

Anderson’s season ended on the highest of notes, with the championship trophy in hand and the 99th NHRA Wally of his career, but it began with uncertainty. At the end of 2020, driving partner Line – who had been a distinct half of the formidable KB Racing 1-2 punch since 2004 – stepped back from driving to focus on the team’s engine program. Unrelated, but equally as significant, Anderson’s longtime major sponsor shifted marketing strategies and went from primary to associate partnership.

In the wake of change, though, came extraordinary new opportunities and beginnings as the KB Racing stable grew to include Rookie of the Year contender Dallas Glenn, who claimed three wins in five final rounds; the continued progress of driver Kyle Koretsky, who earned his first win and reached two more final rounds; victory for KB Racing teammate Matt Hartford in Houston; and a final round in Las Vegas for teammate Deric Kramer, who finished in the top 10 for the fourth consecutive season.

One of the greatest personal highlights for Anderson was a new partnership with Rick Hendrick and Hendrick Automotive Group. Anderson proudly wore the HendrickCars.com paint scheme on his Chevrolet Camaro for the bulk of the season and made history with it as he became the most winning driver in the category with his victory at the NHRA FallNationals in Dallas. 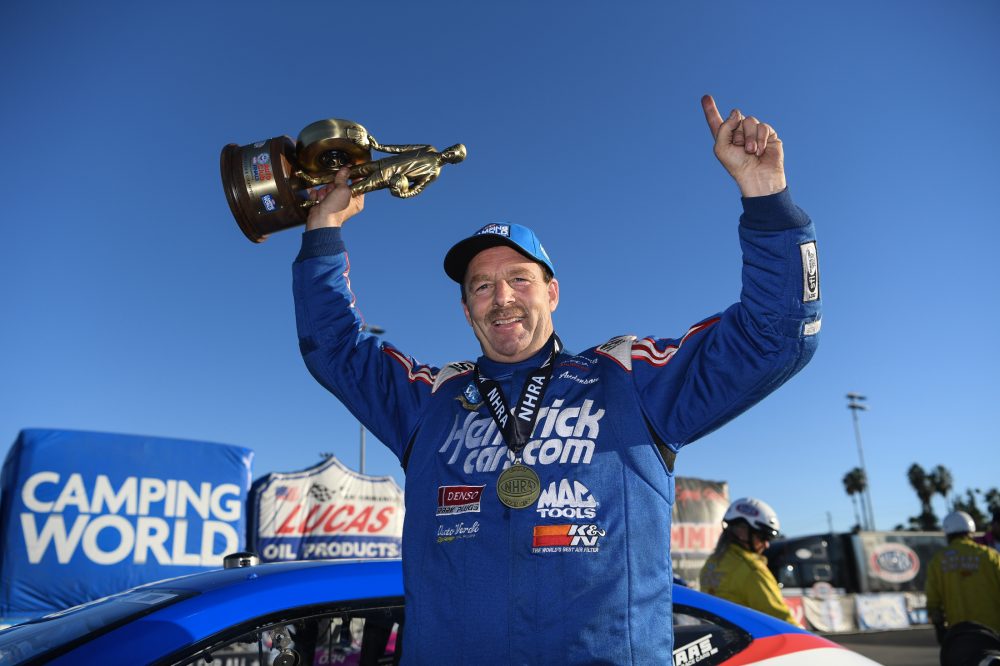 “I cannot express how much it means that Rick Hendrick believed in me and wanted to be part of this,” said Anderson. “Mr. Hendrick loves to win – they all love to win over there, and they’re all behind me. When Kyle Larson won the [NASCAR] championship in the HendrickCars.com No. 5 car last weekend, it was a shot in the arm for me. I watched him come from behind with a great pit stop to win, and that’s what I needed to get my head together. He’s just a great driver and an inspiration.”

With the championship in hand, Anderson will go into the NHRA Camping World Drag Racing Series winter break with a new goal to focus on: earning win No. 100.