The 2021 season of NHRA’s Camping World Drag Racing Series has already been one of the most memorable of Greg Anderson’s career, and it isn’t finished yet. This weekend, the driver who has held the points lead all season long in Pro Stock will venture to The Strip at Las Vegas Motor Speedway to battle for a fifth world championship title.

The scene will unfold at the Strip at Las Vegas Motor Speedway with the Dodge // SRT NHRA Nationals, and in two weeks, the final pages of this season’s thrill-packed story will play out at the NHRA Finals at Auto Club Raceway at Pomona.

“My goal is to go to Las Vegas and widen the points to where it’s not such a complete sweat at Pomona, but I think we all know better than that,” said Anderson, who has an 81-point lead over No. 2 Erica Enders. “We all know it’s going to go down to the wire. We’ll see how the weekend plays out, but my goal is to go the distance and get the 99th win. But there are 15 other cats out there that want none of that.”

It’s been an incredible year for the driver of the HendrickCars.com Chevrolet Camaro, who campaigns his reliable racecar out of the Ken Black Racing stable of fearsome Pro Stockers. Anderson, who was inducted into the North Carolina Auto Racing Hall of Fame in early October, became the most winning driver in the history of the class with his victory the following weekend at the NHRA Texas FallNationals.

Twenty years ago, the Northern Minnesota native couldn’t have envisioned a career of this stature. In 2001, Anderson had just three years of experience driving in one of the most technologically advanced categories in all of drag racing, but that was the year everything started to click.

Then-partnered with George Marnell and current team owner Ken Black, Anderson claimed the first win of his career, along with his first No. 1 qualifier award (Atlanta 2001), and first U.S. Nationals win (Indy 2001). 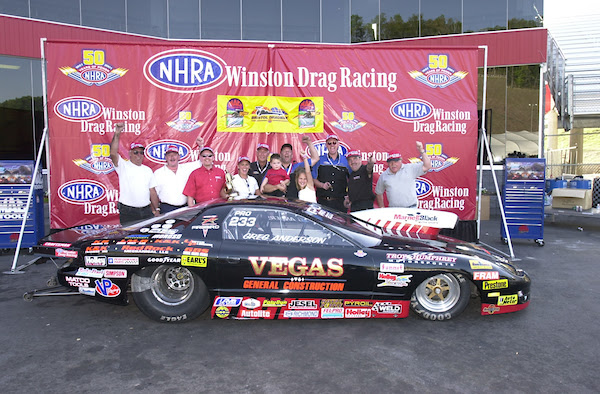 That day at Thunder Valley, Anderson, the No. 9 qualifier on a 6.968-second pass, was at an immediate disadvantage in the first round of eliminations. Opponent Allen Johnson was off the starting line first with a .023-second reaction time to a .073, but Anderson was blazing a path to the stripe, and that’s right about where he made up the difference. He squeaked by in his jet-black Pontiac Firebird for a .007-second margin of victory with the fastest winning pass of the round, a 6.933 at 198.58 mph.

He was again quickest of them all in round two, where he had an identical reaction time next to V. Gaines but surged ahead for a decisive win, 6.949 to 7.019.

Anderson and his third-round opponent were also identical in starting line reaction, but by the 60-foot mark, the charging Pontiac had the lead. Anderson defeated Mark Pawuk by .015-second to earn a ticket to the fourth final of a career that started with his debut at National Trail Raceway just outside of Columbus, Ohio, in 1998.

Before the final, Anderson was interviewed for the ESPN telecast in the pits.

“From what Warren [Johnson] taught me all those years working with him, you don’t need to worry about who’s in the other lane,” said Anderson, who was set to square off with two-time Pro Stock champion Jim Yates. “I think I’m doing just as good a job as [Yates] is today, and I have just as good a chance to win if I do my job.”

“I can’t believe it, I won my first race,” exclaimed an almost perplexed Anderson as he emerged from his car. “The car was there, but I was off all day, and somehow we won.”

Flash forward to 2021, when Anderson acknowledged it was an unexpected win for a driver who had finished No. 17 in the points the year before.

“It not only shocked the Pro Stock world – it shocked me more than anybody,” he laughed. “At the time, I was just thankful to be on the racetrack and have the chance to drive a Pro Stock car. I never even realized I could win an event. It was the beginning of a lot of great days to come, but I had no idea they were ahead of me.”

He would win two events that year and then two more the year after, and from there, the trophies began to multiply quickly. In 2003, Anderson won his first championship by way of 12 victories, and in 2004, 15 wins in 19 final rounds secured not only his second championship, but also the SPEED Channel Driver of the Year award.

“At the time, winning that first race was the coolest thing that ever happened to me,” said Anderson. “There was a lot of disbelief, and a lot of people thought we were a flash in the pan, a one-hit wonder.

“It was the start of something really special. I didn’t know that then, so I don’t blame anybody for doubting it – I doubted it. It was a surprise – a great surprise – but it’s just shows you what hard work can do. We don’t claim to be the smartest people out here, but we sure work hard at it. I figure, there are two ways to get things done: you either outsmart everybody, or you outwork everybody. It’s one of the two. I’ve only got one option, so that’s what I’ve elected to do. It’s worked out pretty well for me.”