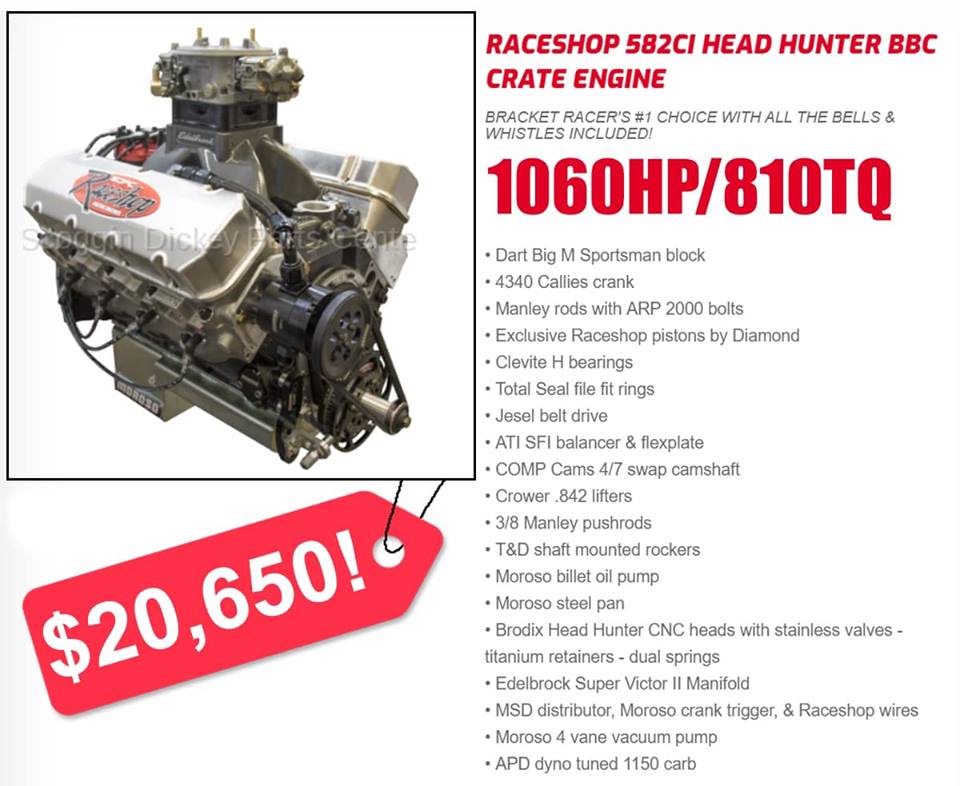 As if racing for $1,000,000 wasn’t enough, Britt Cummings and Gaylon Rolison have upped the ante even more.

The promoters of the Great American Guaranteed Million, which takes place May 20-25 at Memphis International Raceway, announced on Wednesday that they will be giving away a SDPC Raceshop 582 cubic-inch Head Hunter BBC Crate Engine – valued at more than $20,000 – during the highly-anticipated race weekend.

All racers who pre-enter the event (up to 450 competitors), which starts Oct. 11, will be entered into a drawing and one name will be picked during the race to receive the 1,060-horsepower engine.

“We want to give something back,” Cummings said. “It’s all about our racers and letting them know we’re here for them. This race isn’t for us; it’s for them. It’s just giving back to those who have been supporting us. Doing something like this, it’s just a token of our appreciation.”

SDPC Raceshop has been a longtime supporter of Cummings and Rolison’s events over the years, but this massive giveaway is done totally on the promoter’s dime.

Cummings and Rolison are purchasing the motor as a show of support, and to give everyone a little more incentive to pre-register for the event, which will included a guaranteed $1,000,000 payout to the winner.

Interest in the Memorial Day Weekend race has already reached impressive levels, but Cummings noted it was important to add to it.

“Out of appreciation for (SDPC Raceshop) supporting us in the past and in the future, we decided to buy a motor and give it away to the racers,” Cummings said. “It’s going to come race ready. It’s just a thank you to the race shop and the racers. We’re excited to do it.”

The motor and SDPC Raceshop will be on display at Memphis International Raceway during the event, and the winning ticket will be selected at some point during the race weekend.

Cummings will draw the winning ticket at their display, which he anticipates will draw a sizeable crowd.

It’s also the latest announcement in a series of exciting news that Cummings has revealed, starting with the initial Great American Guaranteed Million announcement in July. Since then, he’s added the Factory Stock Showdown class to the event and the engine giveaway to a pre-entered driver.

But Cummings insists he and Rolison have plenty more left up their sleeve to reveal in the coming months.

“We’ve just been trickling out the information,” Cummings said. “Believe me, we have a lot more cool stuff we’re going to be doing as well. This is just another incentive for the racers.”

Pre-entries open for the Great American Guaranteed Million on Oct. 11.

The race will also include a trio of $40,000-to-win races on Thursday, Sunday and Monday, with parking starting on Tuesday, May 19. Testing kicks off the event the following day, with the first of the Triple 40s taking place on Thursday. On Friday, each racer will get a timed entry and then they will run the opening round and the re-entry round before finishing for the night. Racing for $1 million will start Saturday morning with a time run before the winner is crowned.