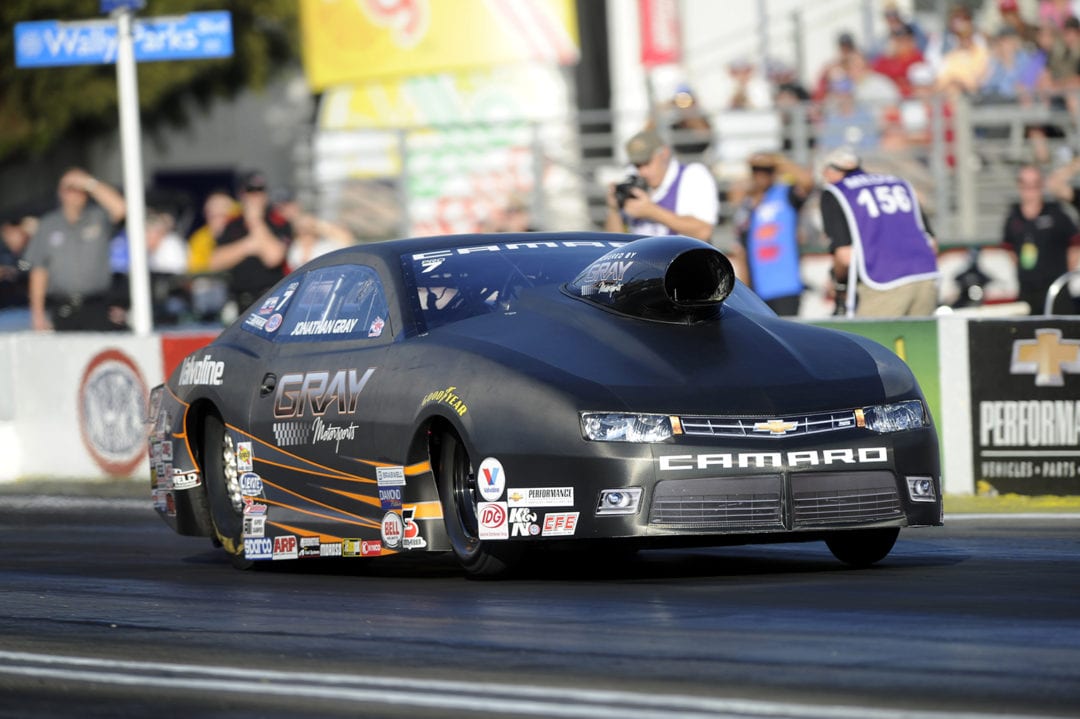 The Gray Motorsports NHRA Pro Stock team isn’t trying to confuse you at this weekend’s 28th annual O’Reilly Auto Parts NHRA SpringNationals at Houston’s Royal Purple Raceway. No, they are simply getting their ducks in a row. Shane Gray will now be behind the wheel of the flat black Gray Motorsports Chevrolet Camaro previously driven by his brother, second-year competitor Jonathan Gray, and Jonathan will be driving big brother’s white Gray Manufacturing Chevrolet Camaro. They certainly aren’t trading cars for giggles; the Pro Stock competitors, teammates, and brothers are instead at the heart of a concentrated effort to move the Gray Motorsports team to the next level.

Jonathan was a contender for rookie of the year honors in 2014, narrowly missing out on NHRA’s Auto Club Road to the Future award. He made an impression as he relentlessly pursued race wins, finally scoring at the Carolina Nationals in the first race of the Countdown to the Championship.

This season, however, told a shockingly different story, and the youngest Gray struggled to get his racecar down the track during qualifying and only advanced from the first round in one of the first five events in 2015. Shane logged a first-round loss in Las Vegas two weeks ago – his second of the year but only his fourth since the Brainerd event in 2013 – and the team took it as the ultimate wake-up call that a change was most certainly in order.

On Monday following the Las Vegas event, Jonathan buckled into the white Gray Manufacturing Chevrolet Camaro piloted so far this season by his brother. After a successful impromptu test session, the team knew they were on to something.

“We noticed a significant difference in how the car reacted to Jonathan’s driving style, and with that in mind, we decided to put Shane in the black car when we got home and see how it would react with another driver,” said Justin Elkes, Gray Motorsports crew chief.

“This program was initially developed around Shane, and we knew we had to tune the cars a good bit different for different drivers, but this shows us just how much. We had made the adjustments, but we just hadn’t gone far enough, and this shakes things up enough to get us outside of our comfort zone to really do things differently. With this initial testing, we like what we see – but it won’t be until the end of Q4 in Houston that we’ll know if what we think we learned truly had an impact.”

Jonathan was pleased but cautiously optimistic.

“When they first put me in the white car, it did the same thing the black car had been doing – it shook, it blew the tires off. I started thinking maybe it was me, but Justin and the guys went back and started really looking at things, and they made quite a few significant adjustments,” said Jonathan. “Finally, we got it to go down the racetrack – and then we just kept getting better and better. We’re not 100% sure that we’ve got everything ironed out, but I have a feeling we’ll be fine in Houston. For once this year, I’m not worried. If things go as we think they will based on what we’ve seen so far, I should be able to qualify in the top half and go rounds on Sunday. I’m pretty excited to just get out there and see what happens.”

Shane will return to the seat of the black Gray Motorsports Chevrolet Camaro, and although it will be the first time he has raced the car with this graphics scheme, he is quite familiar with this particular Chevrolet Camaro. Shane raced it in 2013, when he won the NHRA Nationals in Las Vegas in the fall. Former Gray Motorsports teammate Dave Connolly piloted the car last season, scoring three wins in five final rounds behind the wheel and earning the No. 1 qualifier position in Gainesville.

“We went out and had a great test with this car at zMAX Dragway, and we made four good runs,” said Shane, currently No. 10 in the Pro Stock points. “We were right there with the other teams out there. This car seems to like me, and I sure like it. We know each other. We’ll see when we get to Houston, but I’m pretty happy at the moment. I’ll tell you what – I’m going out there to have fun, and that’s what I want for this team. I want everyone to have a good time and enjoy themselves, and hopefully, this change and that attitude gets us where we want to be.”

Royal Purple Raceway, then known as Houston Raceway Park, was a launch pad for team owner Johnny Gray two decades ago, when he ambitiously sought and accomplished a barrier-breaking run in his Reher-Morrison-powered Competition Eliminator A/Dragster.

At the Houston national event in 1993, Gray made four qualifying passes eclipsing 198 mph and hit the jackpot in the first round of eliminations with a resounding, record-setting 201.60 mph blast. Wife Terry, along with sons Shane and Jonathan, then 20 and 11 years old, were watching from the starting line.

“It was a pretty nice run for the time, and man, it was sure fun,” said Gray in 2013, on the eve of the 20th anniversary of the event. The New Mexico-native completed a successful run in the sportsman ranks with three national event wins in Lucas Oil Series competition, including one in Top Alcohol Dragster and two in Top Alcohol Funny Car, before turning Pro. Now retired from full-time competition, the Gray Motorsports patriarch collected seven wins behind the seat of a nitro Funny Car before stepping back to watch his sons take the reins in the Pro Stock ranks.