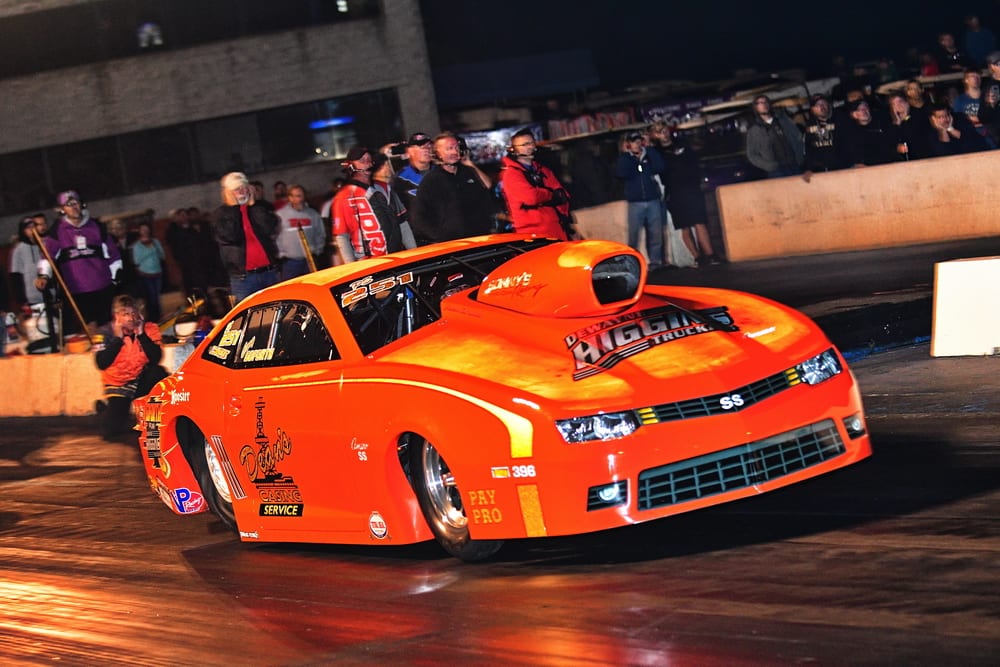 “To look back and think about the run that we’ve had, it’s pretty special. When it’s happening, you’re not looking at it because you’re so focused on trying to get to that point. So you don’t have time to reflect until it’s done.”

Cary Goforth has had an unprecedented career in Mountain Motor Pro Stock. With his latest triumph – the 2017 PDRA Extreme Pro Stock World Championship – Goforth is now up to eight championships across three organizations.

Even after that much success, it’s still hard for the Oklahoma native to fully grasp his accomplishments.

“I want my mom and dad and my immediate family to know how much I appreciate them being supportive. And I want to thank Dewayne and Debbie Higgins and Higgins Trucking this year for stepping up because without them we wouldn’t be out here. My crew, my brother, Chris, Chuck Samuels, my crew chief has just done a wonderful job. I hated to lose Jeff [Dobbins], but I understand he wanted to do his own venture. We had a short crew this year, but if it wasn’t for those people I wouldn’t be out here. I’m very appreciate of the hard work and help, financial and otherwise. These people mean the world to me.”

Mountain Motor Pro Stocks have been nomadic for the better part of a decade, switching from one organization to another and even starting their own, but now the class has found a home with the PDRA. With a singular series focus and a full tour to run in 2017, the class regained strength and solidarity this season.

“The [Pro Stock] program is all back in the same group again with the PDRA,” Goforth emphasized. “We had 18 cars at Richmond. We’re all one big group again, which is what I think we should always strive to be. The class is gaining strength.

“I’m happy there [at the PDRA]. I want the PDRA to know we’re truly grateful. When Jason Scruggs told us we could come back if it didn’t work out with IHRA, I thought that was a pretty bold and humble statement, even if you’re made of solid gold. This is good racing. Even if a quarter-mile sanction came back and had a lot of opportunity, I just don’t think I’d go for it. You’re going to have a hard time dragging me away from this [PDRA] deal. I think most people in the class are of the same thought from what I’m gathering. We [Pro Stock racers] may not always get along, but it’s kinda like my brother. You better not say anything bad about him, but by God I can say whatever I want. We’re still a family. We don’t always get along, but we’re always there for each other. We’ve had our differences, but we’re back to being more of a family again and I could go for some of that. I’ve been in the middle of some of these deals and I’m not saying I was right in every situation. I’m not saying I was wrong in every situation. We owe the PDRA more than words can say. I want them to know how grateful I am. This is where we need to be. That Richmond event – the atmosphere was really good there. There was a lot of cars. There were fans. The motorhomes were three deep across. The atmosphere was just awesome. That’s the thing I love about racing. You just felt something there.”

While the future is bright and certain for Extreme Pro Stock, Goforth’s own future isn’t quite as clear. After partnering with Higgins Trucking this season for a one year deal and selling off the car and trailer, Goforth isn’t sure their family-owned Dean’s Casing Service will be in a position to jumpstart the program again.

“We really don’t know what next year is going to look like, but we’re going to try our best to be out here,” Goforth explained. “Things are probably as good as they were for a lot of years. I realize that. My dad is not too prideful enough to know that to do this he either needs to have a partner or he needs to scale down or completely do away with it. We’ve got some thinking to do, some adjusting to do. We sold the car to Dwayne and Debbie Higgins. If it wasn’t for them we’d have been on the sidelines this year. It’s not a split or anybody fighting or anything like that. They wanted to go a year and they experienced that. I think they want to focus on business. There may be a possibility we could buy the car back. Tomorrow’s a new day, so we’re just going to keep fighting, clawing and scratching and hopefully get back out there.

“The competition is getting so good right now I don’t want to miss out on next year. There’s some good things coming with everybody and that’s what Pro Stock is all about – good, close, tight racing, competition and points battles.

“I told Dad the other day, with tears in my eyes – I promise you that – I said, ‘I don’t want to quit, Dad, but if we have to, I’ll never have to look back and say, boy I wish we woulda done it this way.’ We ran this deal professionally, we ran it right, and we did everything we could do to put ourselves in a position to win. It’s a good thing to have a dad that thinks outside of the box. And because of Dad, there’s no regrets. ”