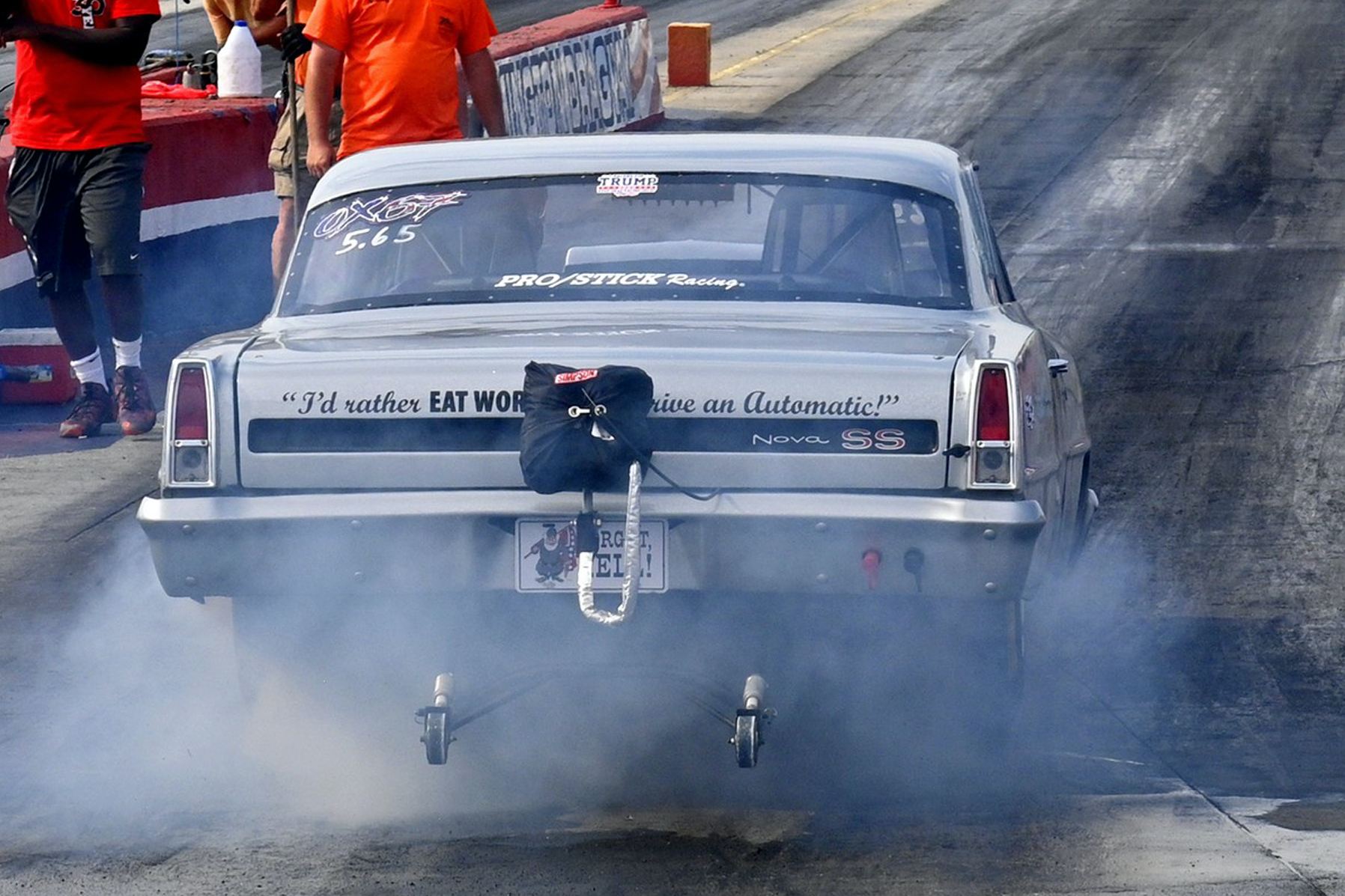 It’s amazing to imagine how an event that started with just five cars could grow into such a celebrated and heavily attended attraction, but that’s exactly the kind of growth the Stick Shift Nationals has enjoyed in just over a decade. The event was birthed in North Carolina, where there’s no shortage of high-winding, gear-banging race cars, most notably within the ranks of a well-established traveling series called the Classic Gear Jammers.

It seemed like a no-brainer that a once-yearly gathering of clutch cars would be a huge hit. That’s why it was rather puzzling when the inaugural Stick Shift Nationals held at Farmington Dragway yielded just five cars. Ken Regenthal, who retired from the Pro Mod scene and now races a straight-drive Corvette, remembers the event well, mainly because he won.

“After the race, [Farmington Dragway announcer] Mark Joyce walked up to me and asked if I had any ideas on how we could improve and grow the event, and I told him maybe if we could get some sponsors we could improve the purse and maybe that would help,” Regenthal remembers telling Joyce.

It sounded good on paper, as the saying goes, but Regenthal decided to take it a step further and put some action behind his own words to try and drum up some sponsorship, beginning with his own business, Clemmons Concrete.

What happened next is textbook sponsorship-gathering on the grassroots level, as Regenthal simply started calling everyone he knew in racing and in business, believing that any business owner could afford a meager, entry-level sponsorship of $200, and he couldn’t have been more correct. The following year he had roughly 40 sponsors support the gathering at Farmington, not to mention lots more cars, but that was only the beginning, as year after year the event has enjoyed a perpetual state of growth, both in car count and sponsorship.

Incredibly, the 11th running of the Clemmons Concrete Stick Shift Nationals at Farmington in late June drew a record-breaking 176 cars! “That’s our new record, and it’s got be the largest turnout of gear jammers anywhere!” Regenthal says.

What’s more, the event had no less than 125 sponsors who supported the event, and Regenthal is forever amazed at how the gathering has grown, most recently with the addition of a gambler’s race that was thrown together at the last minute. 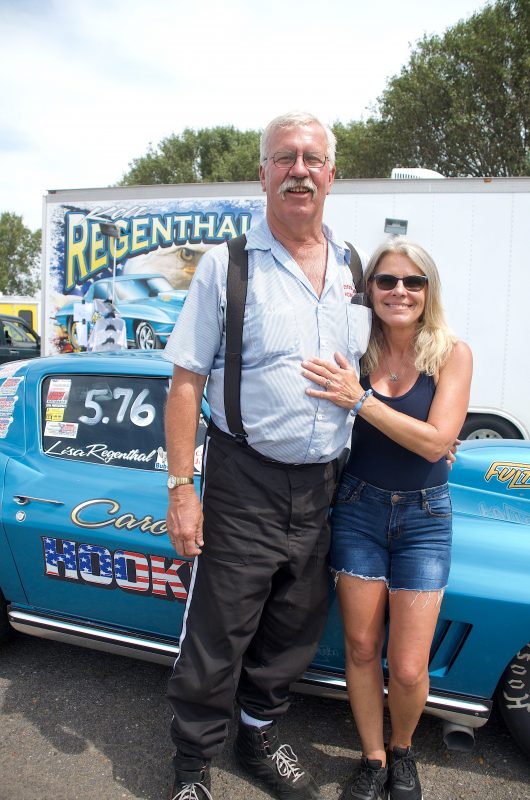 “It all started when a guy from West Virginia called me a week before the race and asked if he could test his car on Friday night,” Regenthal says, “so I said ‘sure’ then I told him I’d throw in $1,000 and make it a gambler’s race. We put the word out on Monday and suddenly we had enough sponsors step up to the point that we ended up paying eight places, including $1,000 to win. We had 110 cars show up for the Friday night gambler’s race and the crazy part is, a week ago I didn’t even know it was going to happen!”

Famously, the entire event is completely free for participants to enter, which includes the main event, the “second-chance” race, as well as the newly launched gambler’s race. Saturday’s main event pays $5,000 to win, ever since Butner Construction stepped up and started kicking in an additional two grand in support to the winner, which is a sensational purse for a free-entry sportsman race, with a payout structure so deep that every single person who competes gets paid to race.

And just when Regenthal thought the event couldn’t get much better, a complete stranger walked up to him at the most recent running and pledged $10,000 for next year’s event. While the gentleman was indeed a stranger at the time, he turned out to be Greg Butcher of Butcher Trucking in Mocksville, North Carolina, and he recently bought himself a gear jammer and wants to get involved with the Stick Shift Nationals. “So next year, it’s gonna be $10,000 to win and everyone else is gonna get paid more too,” Regenthal smiles.

Winners from the most recent event include Mike Shamel, who drove his beautiful Chevy II to the victory on Friday night over Andy Charcalla’s Mustang during the first-ever gambler’s race. 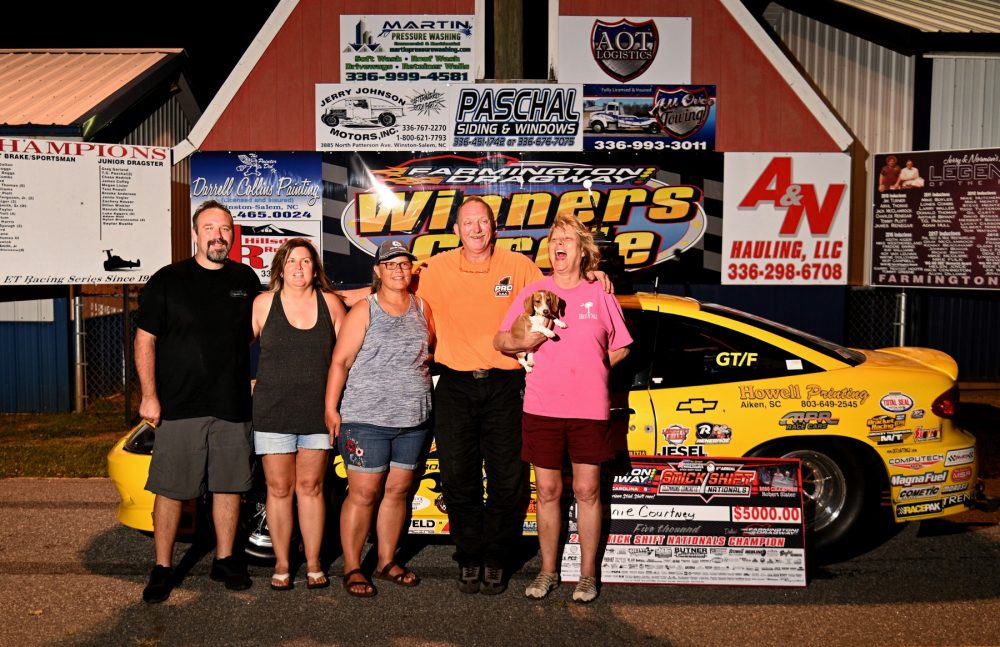 The Stick Shift Nationals is well-known for producing an original winner in the main event, as no one has ever duplicated the feat in the history of the event, and this year’s race kept that streak alive. Ronnie Courtney from Johnston, South Carolina, took top honors in his 2005 Cavalier, as he got past the 1969 Camaro of Castalia, North Carolina’s Joe Collins. 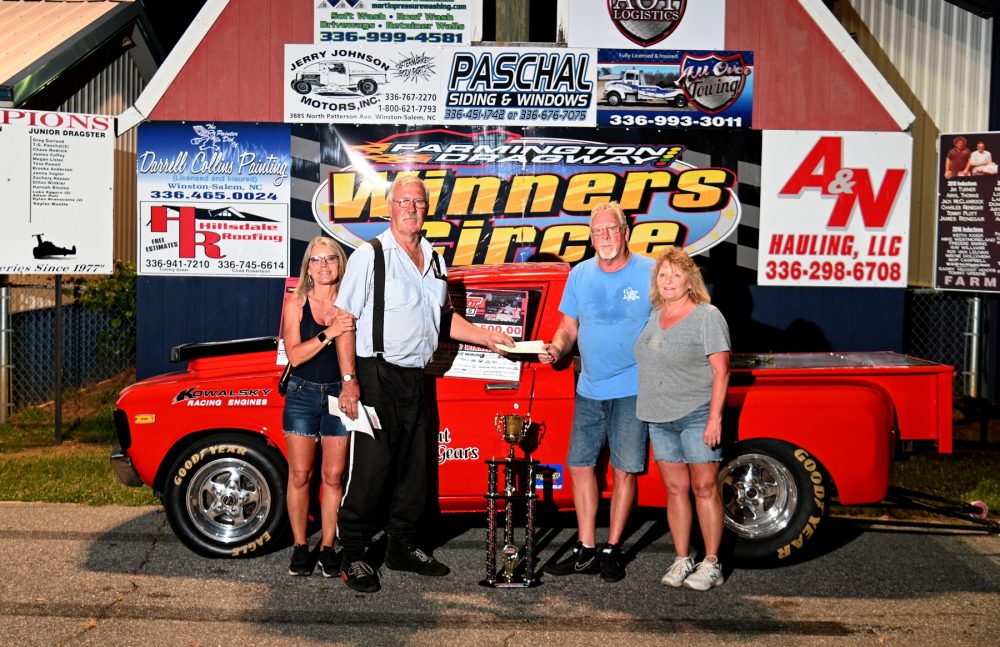 Those who make an unfortunate exit in round one have the opportunity to enter the “second-chance race.” Pete Wright seems to have the winning formula for this event while driving his 1978 Chevy Luv truck. Wright has found the winner’s circle before in the second-chance race, and he did so again by getting past the 1978 Mercury Zephyr wagon of Chuck Martin. The event stretched well into the night to determine a winner, thus capping the most heavily-attended gathering to date.

“I’ve got to thank my wife, Lisa, for being my biggest help – without her I couldn’t do this,” says Regenthal.

Legendary racer Mike Boyles continues to be a huge supporter and sponsor of this event, as well as Farmington Dragway manager Sandy Collins, Mark Joyce and Leigh Anne Flynt.

“I’ve got to give a mention to Ronnie Flynt, who persuaded me to get back into gear jammer racing a few years ago, which is how I first started in drag racing all those years ago,” says Regenthal. “With everything we’ve got going on, we’re real excited about the future and we just believe this race is really going places.”