Don Garlits will help British drag racing celebrate a half-century of history and achievement later this year when he crosses the Atlantic for the first time in nearly four decades to be inducted into the British Drag Racing Hall of Fame (BDRHOF). ‘Big Daddy’ will be accompanied by members of his family when he receives the accolade at the BDRHOF’s grand Gala evening on Saturday November 22nd at the Savill Court Hotel, near Windsor, west of London.

The Gala evening will mark the 50th anniversary of the British International Drag Festival, when Garlits first raced on British soil. The 1964 ‘Dragfest’ was a joint venture between British sports car manufacturer and entrepreneur Sydney Allard and Wally Parks, president of the National Hot Rod Association, and gave British audiences their first full taste of this exciting new motorsport from America. 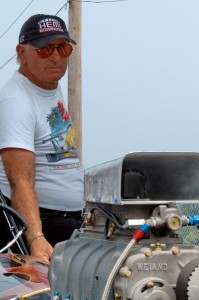 In 1976, Garlits’ second U.K. appearance gave Santa Pod Raceway the greatest single weekend in the track’s history, and he raced there triumphantly again in 1977. The Gala evening in November sees him return to the country for the first time since.

The Garlits family’s November trip also will include a visit to the National Motor Museum at Beaulieu in Hampshire, on England’s south coast. It was a previous visit there in 1976 that inspired the foundation of the Don Garlits Museum Of Drag Racing at Ocala, Fla., the world’s first museum wholly dedicated to the sport. In turn, the International Drag Racing Hall Of Fame, based at the Museum, inspired the formation of the British Drag Racing Hall of Fame.

Garlits was named in May as the Gala evening’s guest-of-honor. His Hall of Fame induction could not be revealed until 2014’s new members were officially announced this past weekend. Another inductee will be Gerry Belton, whom Sydney Allard appointed as general manager 50 years ago to oversee the ‘Dragfest’ tour’s organization. The remaining inductees are past British racers Russ Carpenter, Dennis Norman and John Whitmore.