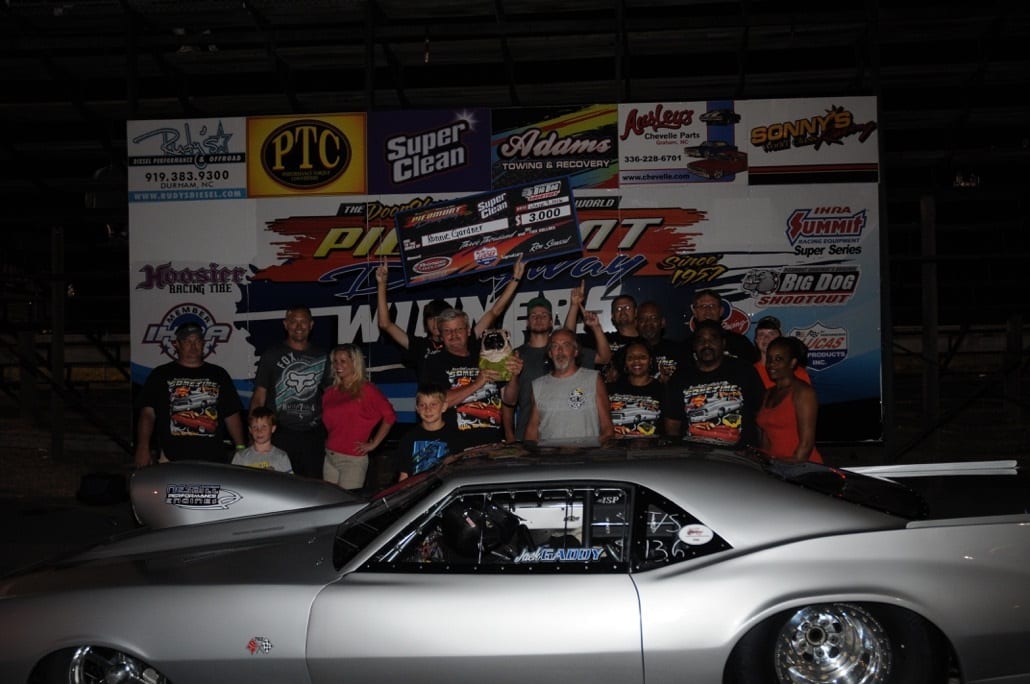 After a rainout last week, the June edition of Piedmont Dragway’s legendary Big Dog Shootout returned on Thursday night with eight quality cars on the property and fans treated to great competition. Although some cars were in Michigan for the PDRA event, the field was packed with great cars and drivers.

After qualifying, to no one’s surprise, Brett Nesbitt was on the pole with a 4.08 ET serving notice that the Pontiac-bodied machine was ready to start another run at a points title, only this time, as a possible Big Dog champion. Second was Charles Richards’ Corvette at a 4.12, Brian Schrader at 4.19, and Bubba Turner at a 4.22. Eventual winner, Ronnie Gardner, was fifth with John Lassiter still battling gremlins in sixth. April winner Larry Pearce was seventh and Cam Clark was eighth. 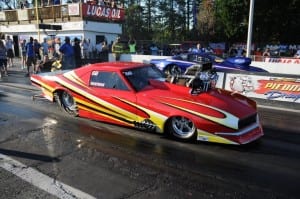 Eliminations started with Turner putting a holeshot on Schrader with a 4.12 defeating a 4.18. Gardner used a 4.16 to defeat Lassiter, even though John lost power at the hit of the throttle. Richards ran a 4.19 to get by Pearce, and Clark ran a 4.32 to defeat pole setter, Brett Nesbitt, who overpowered the track. The semifinals set the winner as Gardner used a 4.14 holeshot to defeat Richards’ quicker, but losing, 4.12. Then Turner ran a career best 4.14 ET to defeat Clark, but lost a head gasket in the lights rendering his Camaro unable to return for the final. In true champions’ fashion, Gardner ran a 4.18 single to prove his win was no fluke.

Finally, Nesbitt power won the event, but not in Brett’s car. Gardner showed why he has been a Big Dog champ many times before. Turner had his best chance to win a Big Dog event, save a head gasket. The legendary event that Turner’s mom and dad started has come through many changes but is still one of the greatest events in drag racing.

The July Big Dog event will be the 20th anniversary celebration of the Big Dog Shootout. Therefore, if you have participated in the Big Dog Shootout, won a Big Dog, and/or a past champion, please contact Kevin Shipmon or Greg Burrow and plan to attend on July 2nd. We welcome original cars, trophies, drivers, and crew chiefs, and, of course, all the wonderful stories that happened during this 20-year run.