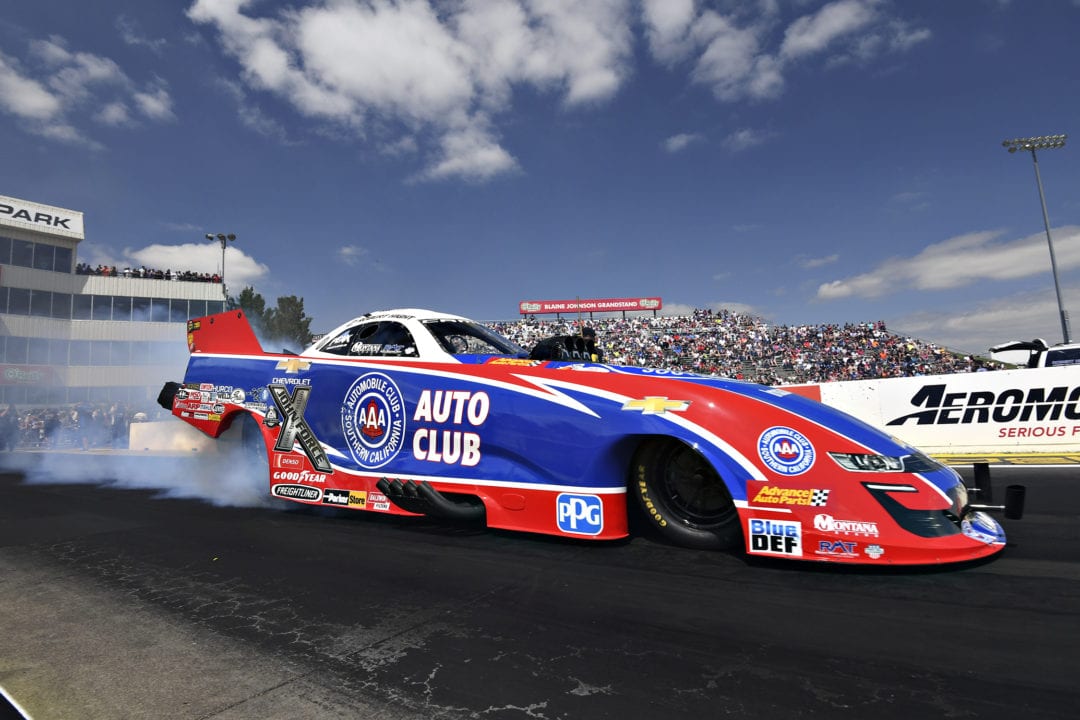 Robert Hight and the Automobile Club of Southern California Chevrolet Camaro SS team put together an ideal Sunday to race their way to their fourth win of the season at the Menards NHRA Heartland Nationals presented by Minties. The victory, which was his third at the Heartland Motorsports Park where he earned his Funny Car license, ties him with Don “Snake” Prudhomme at 49 all-time wins.

“It’s a real big deal. I can’t believe my name is used in the same sentence as Don Prudhomme. Forty-nine, that’s crazy. You know what’s really crazy is that I’m only 100 back from John (Force), but I’m coming,” Hight said.

The streak of perfection began for Hight in his fourth qualifying effort when he ran 4.015-seconds to be low of the session. The pass improved him from No. 13 to No. 9 entering race day, only the second time this season he’s qualified in the bottom half of the field. Hight would go on to be low of each elimination round on Sunday.

“It’s the second time this year we’ve been in the bottom half of the field and we just had bad luck. We didn’t miss it or do anything wrong. Just every run we had bad luck; something breaking, something falling off. Finally, we get it together Q4 as low ET of the session and then low ET of every round on race day,” Hight said. “Once you get going with this Auto Club Chevy team with Jimmy Prock and Chris Cunningham you just start rolling. Everybody knows their job, they work together so well, it’s a lot of fun.” 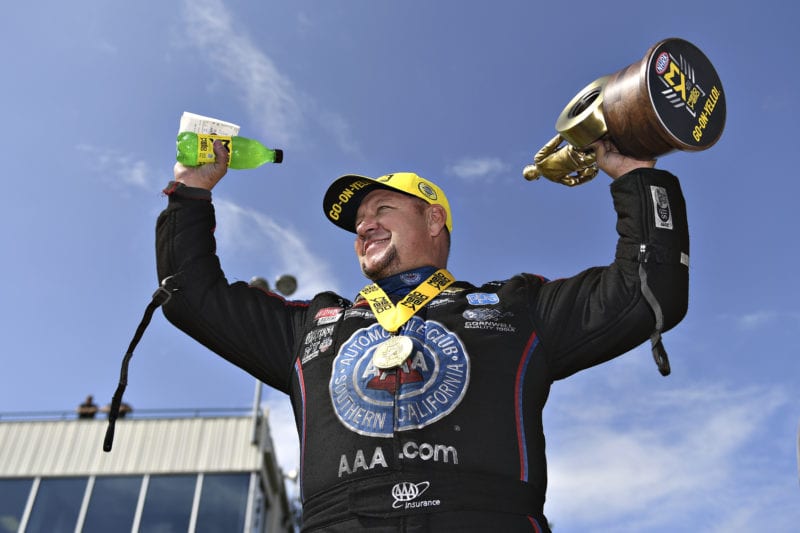 Hight and the Auto Club team picked up the win against Shawn Langdon in the first round when the Jimmy Prock and Chris Cunningham tuned hot rod blew the field away with a 3.897-second pass at 330.88 mph. The pass would go on to be the quickest and fastest of the entire event for the Funny Car category.

In the second round, Hight matched up with reigning world champion J.R. Todd. Todd would run into trouble on his pass for only a 9.547-second elapsed time. The Auto Club Camaro would have another impressive run at 3.921-seconds and 328.70 mph. The round win would set Hight to face Tommy Johnson Jr., a rematch of the final round from the Route 66 NHRA Nationals in Chicago just a week ago where Hight came away as the runner-up.

Both veteran racers would leave the starting line too early however, Johnson Jr. left first, fouling out at -.102 compared to Hight’s -.100 giving the Auto Club team the win. Though the race was won at the start, Hight would continue the streak of low ET of the round with a 3.900-second pass at 330.63 mph and take lane choice over Jack Beckman in the finals.

“I think there was a little bit of luck involved in the semifinal run. But when you go through the ladder like we did, this one was well-earned. Tommy Johnson Jr. double-stepped it up there. He was revving it up and I could hear it and then he blipped the throttle and I couldn’t hold it any longer because it was a .47 tree, which is about the longest it will go. As I went by the tree I looked and I was green and he was red, but I knew I left too soon,” Hight said. “For the final round, you have to go back up there and perform again, so you just have to put that behind you. I spent most of my time between rounds working on my tree, getting that out of my head.”

Beckman, who ended John Force’s run for his 150th win at the Heartland Nationals in the semifinals, beat Hight on the starting line but that was the only victory he’d have for the rest of the afternoon. Hight would cross the finish line at 3.895-seconds and 330.88 mph bettering Beckman’s 3.969 at 323.97 for his fourth win of the season, third at the facility and 49th of his career that began 25 years ago as a crew guy on John Force’s Funny Car. His first race running clutch with the legendary team? Heartland Nationals.

“It was 25 seasons ago that I came in here. I flew in and met the team and went to work doing the clutch. That was pretty cool, and then I got my Funny Car license here. I have a lot of fond memories here, and now getting to win this race here a few times is pretty cool,” Hight said. “This is a great racetrack, the fans are great, it’s one of my favorites.”