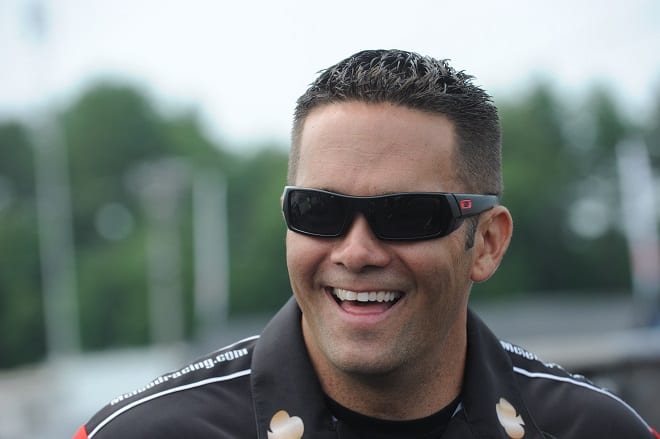 When Dave Richards joined the Funny Car ranks in 2013, he found his home behind the wheel of the Paul Richards Racing family Funny Car. Financial support, however, does not come easy in the 300+ mph nitro ranks, and Richards soon realized that he would have to be happy with whatever seat time he could get.

The well-bonded team carefully selected a handful of events each season, stretching their dollars to maximize participation – and then friends Brian and Janie Mahoney joined them at a race in Charlotte last season and fell in love with the sport. The Mahoneys stepped up to the plate with sponsorship for Dallas, and as they continued to observe the passion of the team and taste the adrenaline of chasing victory, they decided to bring an extended offer to the table. In 2016, the Mahoneys and their North Carolina-based business, Prestige Corporate Headquarters, will sponsor the Paul Richards Racing team for 10 events in NHRA’s Mello Yello Drag Racing Series.

The Mahoneys will fully fund the race efforts of the team, and they will utilize space on the racecar to raise awareness for a charity: Alzheimer’s Association, whose mission is “to eliminate Alzheimer’s disease through the advancement of research; to provide and enhance care and support for all affected; and to reduce the risk of dementia through the promotion of brain health.” 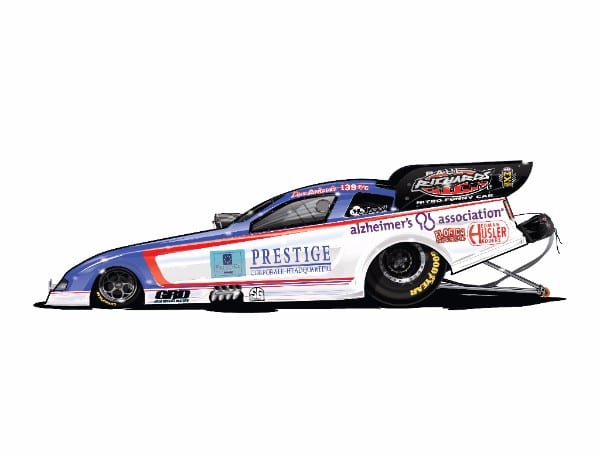 Although logos for Alzheimer’s Association will adorn Richards’ Mustang, no money will come from the organization.

“The sole purpose of having Alzheimer’s Association on our car is to raise awareness for this organization that is working so hard to help those affected by Alzheimer’s and their families,” said Richards. “More than 5 million people are living with Alzheimer’s now, and that number is expected to triple by 2050 without the development of medical breakthroughs to prevent or cure the disease. We hope that everyone who sees our car on the racetrack will take the time to go to alz.org to see what they can do to help.”

Richards will make his season-debut at the Amalie Oil NHRA Gatornationals at Gainesville Raceway, March 17-20, 2016, and he will continue the tour in April at the NHRA Four-Wide Nationals in Charlotte. The remainder of events on his schedule has yet to be announced.

“I’m just really looking forward to getting the season started in Gainesville,” said Richards, who made his Funny Car debut at the NHRA New England Nationals in Epping in 2013. “It’s hard to believe that it’s all coming to life. Last year, I was starting to think that this was never really going to develop into something big, that we would just have to be happy going to one or two races a year. But thanks to the generosity of the Mahoney family, this is really happening. We’re really doing this.”

The financial support has allowed the team to ramp up their efforts to a more competitive level than ever before with a new race car, a 2014 Ford Shelby Mustang previously wheeled by Tim Wilkerson.

“This is the same chassis and body style that Wilkerson just won with in Phoenix, so that makes me feel good,” said Richards. “We’ve been able to upgrade our trailer and race car, we have new parts. It’s going to be a great year. Our team has put so much work into getting everything assembled and ready. My brother, Paul, has been doing a great job lining everything up, taking the time to make sure we get the best deals, ordering parts, and all kinds of things to set us up for a great season. No one on this team can wait for the first qualifying session at the Gatornationals.

“This is uncharted territory for us, because we’ve always had to race so conservatively in the past. It’s different now; there is no reason we shouldn’t be able to run really competitively. It’s a great feeling to know that someone believes in us, and that they believe in me as a driver. There’s a little bit of pressure that wasn’t there before, because you want to live up to their expectations, but that’s a good problem to have.”

The Paul Richards Racing team will be headed, as always, by esteemed crew chief Paul Smith, who has been by Richards’ side since he licensed in Funny Car. The team will once again include Richards’ brothers Brian and Michael, along with Kevin Fenstermaker, Danielle Fenstermaker, Chris Foster, Dave “One Time” Lindsay, and Steven Hoppe. The rest of the crew will rotate depending on the event.

Back at the shop, John Muruki, Steve Gruenwald, Michael Harrigan, Mike Smith, Danny Hourahan, and Tyler Kitchens have been tremendous help in preparing the truck, trailer and equipment for the year ahead.

“We have a great team, but none of us could do this without the support of our families, so I want to say thank you to all of them,” said Richards. “There is a lot of time that goes into this, time in the evenings when our day jobs are done and time on the weekends. Our families sacrifice a lot for us, and I just want everyone to know how much we appreciate it.

“It’s really special to me that we’re starting our season in Gainesville, because some of my best childhood racing memories are from that track and hanging out with my dad,” Richards continued. “I remember standing next to the fence and watching Funny Cars doing their burnouts and thinking, I want to drive one of those things. It took a little while, but I’m here.”