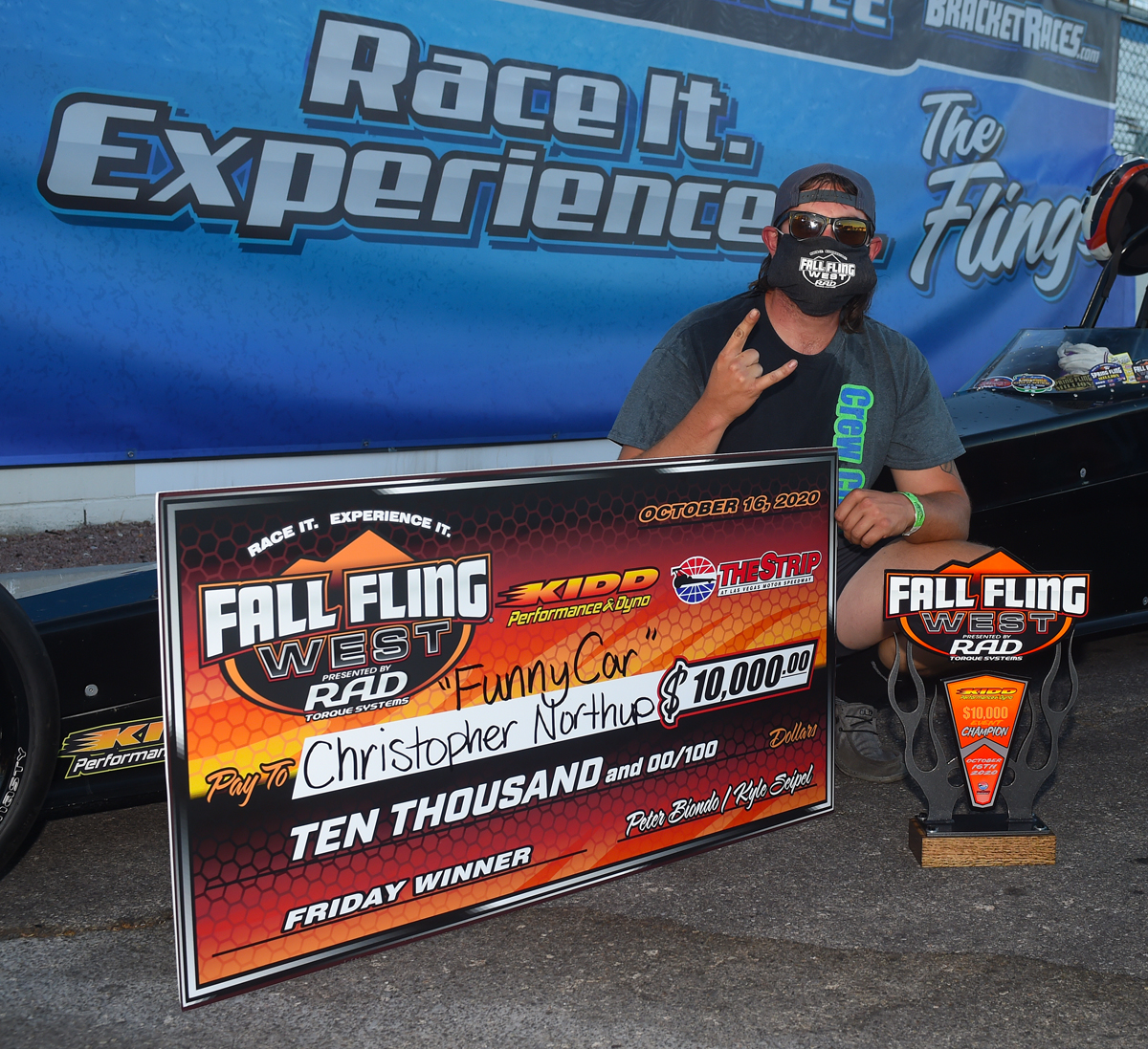 A day removed from the A-1 Performance $100,000 64-Car Shootout which saw Jim Glenn drive his 69’ Firebird to the win, the Fall Fling West presented by RAD Torque Systems moved into the Kidd Performance Friday $10K.  Racers jumped in action at 8AM with new entry time trials.

With new entry time trials complete, eliminations kicked off with the GearWrench Pro class followed by Super Pro doorcars and then dragsters.  Everyone was looking to grab the ATI Performance Products Bounty Award for stopping Thursday’s winner Jim Glenn.

After the completion of the first two rounds, promoters Peter Biondo and Kyle Seipel added a 32-Car $5,000 Shootout to the schedule.  The Shootout was open to racers that did not make it out of the second round of eliminations in the Kidd Performance $10K.

Speaking of the Kidd Performance $10K, there were twelve racers left in contention as we reached the ladder round.  The twelve racers consisted of Curtis Zinzilieta, Jeremy Wilson, and Howard DeVore in the GearWrench Pro Class.  They were joined by Thursday finalists Jim Glenn and Gabriel Torres who were both looking to go to back-to-back final rounds.  JR Leerkamp was double entered in his Corvette roadster and his dragster.  Jake Jones, Pete Bothe, Joe Leavitt, Shawn Hart, and Chris Northup rounded out the field.

In the GearWrench Pro class, Zinzilieta defeated DeVore to move into the Pro final against Wilson who had the bye in Round 6.  On the Super Pro ladder, Glenn defeated Leerkamp’s first entry, Torres had the bye, Jones defeated Bothe, Leavitt stopped Hart, and Northup took out Leerkamp’s second entry.

Round 7 found Funny Car Chris Northup sitting on the bye while Gabriel Torres kept rolling after defeating Jake Jones on a breakout.  Leavitt earned the ATI Bounty when Jim Glenn missed the tree.  Zinzilieta collected the GearWrench Pro Class bonus after Wilson was .010 red sending Zinzilieta to the semifinals.

The Kidd Performance $10K semifinals saw the two doorcars of Leavitt and Zinzilieta battle for a spot in the final round while Torres and Northup squared off in their dragsters.  After winning the Pro Class, Zinzilieta left early sending Leavitt and his Chevy II to the final round.  In the dragster pair, Northup was .005 better off the line and posted a dead-on two pass (5.272) to prevent Torres from making a second consecutive final round.

The final round saw Funny Car Chris Northup turn on the final win-light when his .033 initiated 5.261 (5.25 dial-in) more than covered Leavitt’s .031 light and .05 above 6.140 effort.  The winner’s circle was lively as Northup and his friends celebrated his victory. 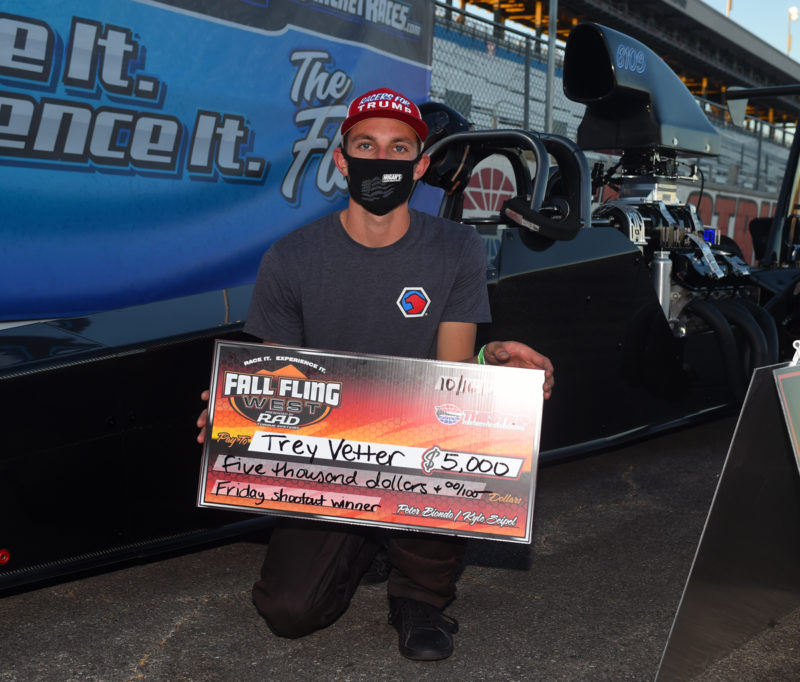 The 32-Car $5K Shootout was also full of excitement as racers battled to make up for their early exit from the main event.  At the round of eight, Mark Kidd defeated Greg Hicks, Johnny Carter stopped Andy Schmall, Trey Vetter bested Jeremy Rupp, and Taylor Strange defeated Chuck Hawk Jr.

The real excitement began just as Strange and Vetter were about to pull under the famous LVMS arch.  A bolt fell out of Strange’s gas pedal just as he pulled up to the arch.  Once his crew found the culprit, Vetter kindly backed up and allowed Strange to fix the issue.  After a short delay, they pulled to the line where Vetter pulled off the win.  Trey used a .016 to .036 reaction advantage once again ripping the throttle to go one above four (4.484) to stop Strange’s dead three effort (4.723).