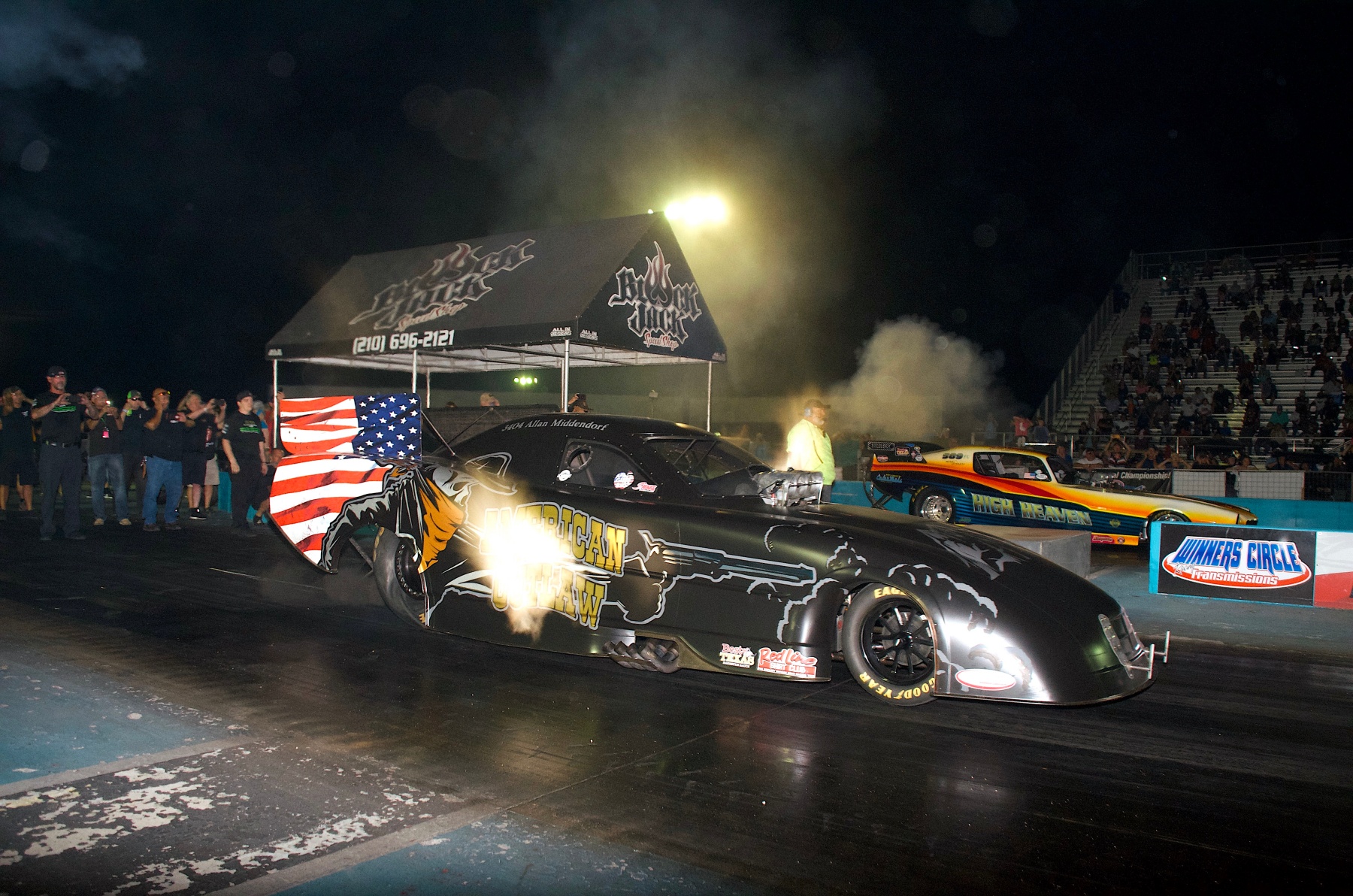 The exciting 2020 season finale of Funny Car Chaos came to a close in early October with a final stop at Alamo City Dragway, just outside San Antonio, Texas. The points battle was fierce this year with a total of 55 teams competing in the eight-race Red Line Shirt Club Championship Tour presented by Mears Mazda Volvo.

Things got kicked off on Friday evening with the first of three qualifying runs. After each team gave it their best shot, Allan Middendorf was sitting atop the pack with a stunning 3.387-second, 234.13 mph blast to the eighth-mile mark, which was a Funny Car Chaos elapsed time record, and came within a half-mile-per-hour of eclipsing Terry Haddock’s record run set earlier in the year right here at Alamo City Motorplex when he ripped off a 234.74 mph blast.

Track officials were so impressed they named Middendorf “Entertainer of the Race,” which was a bonus award in memory of Raymond Beadle, courtesy of Blue Max Racing and Performax Custom Trailers. Alamo City also put up a $1,000 bounty on Middendorf and his nimble hot rod known as “American Outlaw,” the sum to be paid to anyone who could beat the Illinois wheelman in eliminations. 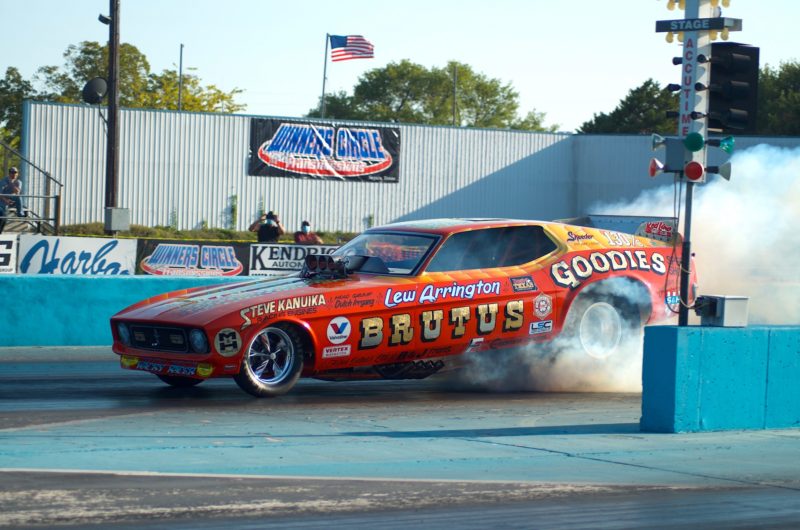 A huge crowd gathered on Saturday, energized by the added drama of seeing if anyone could take down the No. 1 qualifier and collect the bounty. In the opening round of the Rodak’s Custom Roasted Coffee “A” field, Middendorf picked up where he left off in qualifying, blistering the track on a string, dispatching No. 8 qualifier Keith Jackson, whose 4.216 at 180 mph came up short against Middendorf’s 3.491 at 218 mph.

In the semifinals, Middendorf escaped a holeshot from Mark Billington, who lead in the early moments of the race, although the “American Outlaw” machine thundered past him and through the traps with a 3.50 at 217 to Billington’s game but losing 3.78 at 201.

As the thrilling final round was about to unfold, Middendorf was considered a huge favorite to win the race and collect his own bounty, when suddenly the improbable happened during an otherwise perfect-picture burnout: the car experienced a mechanical failure, which popped the blower and deployed the parachutes all in one disastrous sweep.

His competition, Ken Singleton, received the hand signals from his crew that Middendorf was broke, and so the show was his. Singleton, being guided by his crew lined his car into the hot tracks of rubber he’d just laid down and began to inch his way into the beams. Staged and ready, Singleton took the green and wowed the crowd as he thundered to his quickest run of the weekend, a 3.737 at 206, thus scoring a bye-run victory and hefty payday. 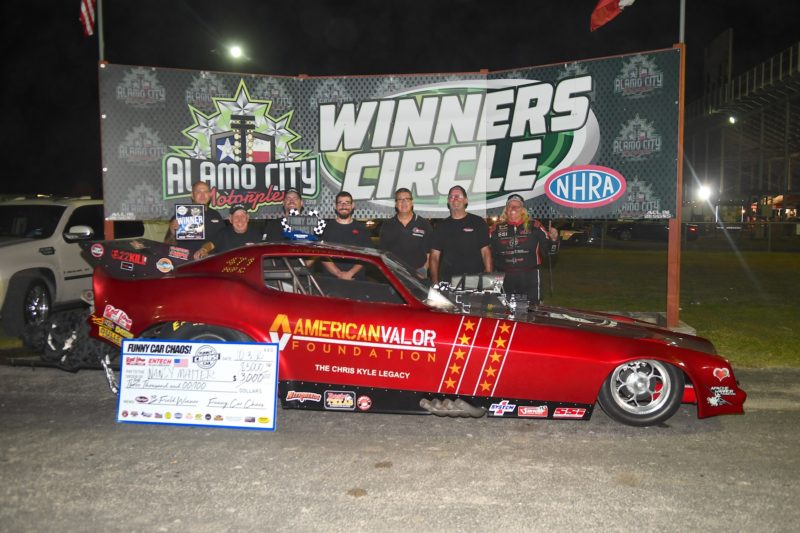 And for the equally entertaining Alkydigger “B” field, Nancy Matter scored an impressive victory, beginning with her No. 9 qualifying spot overall, which is viewed as the quickest among the “B” field contingent for cars qualified 9-16. Matter, who became the first and only female racer to win a Funny Car Chaos event thus far (Mo-Kan Dragway “A” field 2019), qualified in San Antonio with a 4.108 at 189 blast.

In the opening round of eliminations, Matter bettered her E.T. performance with a 4.076 at 159 to get past Damon Kuhn, who stopped the clocks with an off-the-pace 6.465 at 120. Matter continued going rounds after getting past Danny Smith in the semifinals. Smith was first out of the gate, but Matter drove around him before the 660 stripe, clocking a 3.938 at 183 to Smith’s 4.347 at 163.

In the final round, Tod Barker knew he needed a huge holeshot to take down Matter and he indeed left on her by a sizable margin, but he didn’t have the performance to hold off the hard-charging Matter, who streaked to victory with a 3.921 at 192 to Barker’s slowing 4.445 at 138. 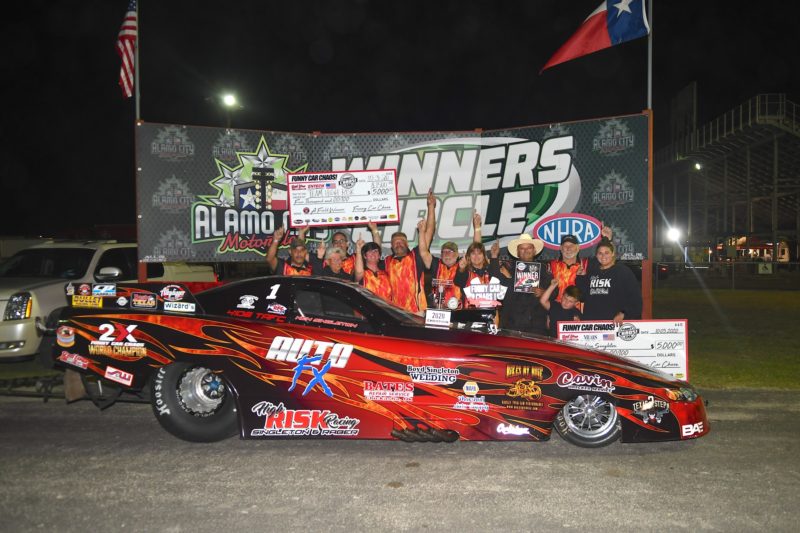 Alamo City Motorplex stepped up in a big way for the series in 2020 and was named “Track of the Year” by Funny Car Chaos. Early in the year after COVID-19 disruptions and scheduling changes forced the series to explore other options, Alamo City Motorplex not only hosted the first Funny Car Chaos event this year in which fans were allowed to attend, they later invited the series back to hold the World Finals at the south-central Texas facility.

“After hosting two Funny Car Chaos events this year after not even being on the initial schedule, I wanted to say ‘thank you’ to Alamo City Motorplex for stepping up the way they did,” says series founder Chris Graves.

As the details of the 2021 schedule were recently announced, Alamo City Motorplex will again host the World Finals next year. “We will kick off the 2021 season at the Texas Motorplex in Ennis and visit Kansas International Dragway near Wichita,” Graves says. “Both tracks will be new venues for our series.”