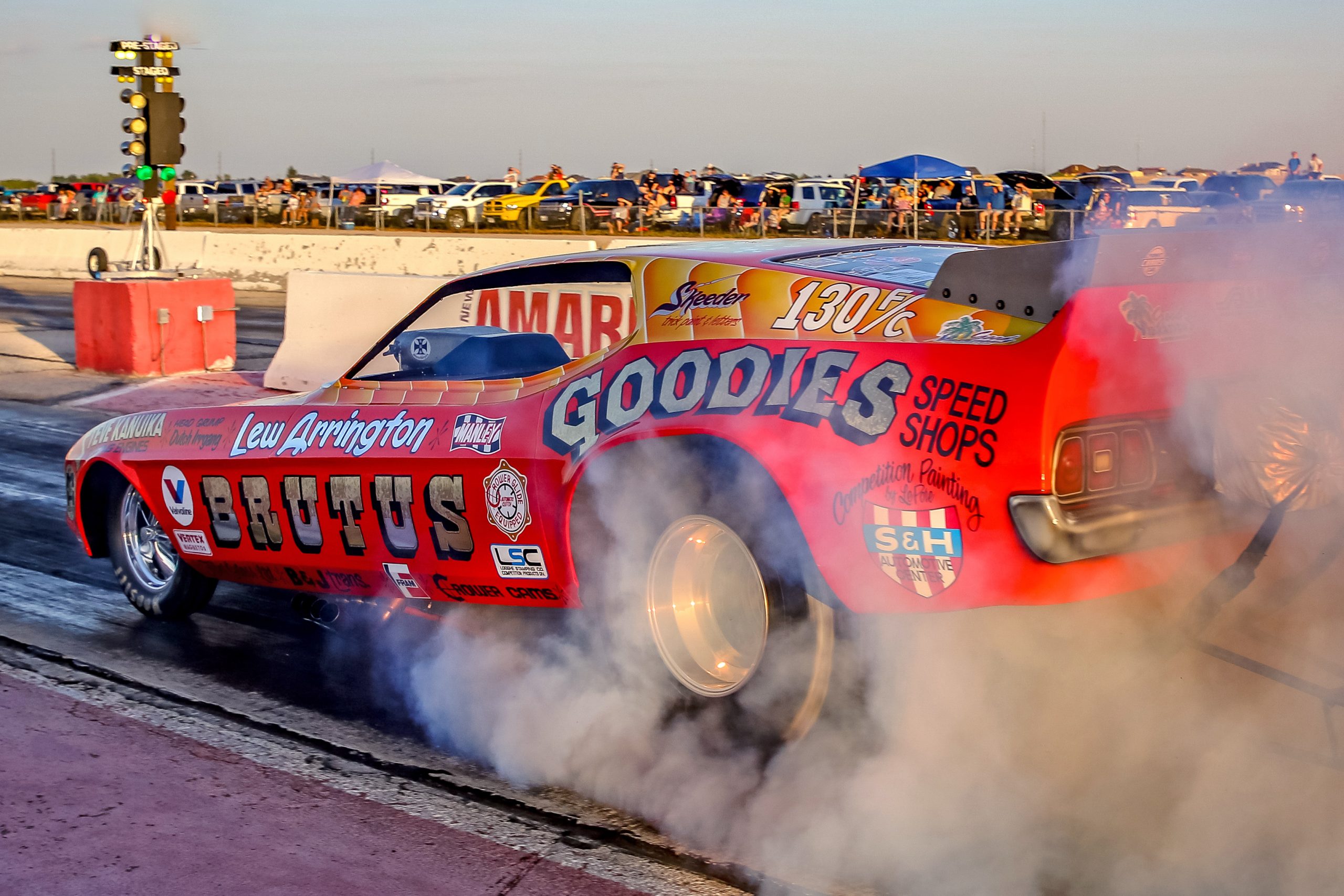 The historic Texas Motorplex sets the stage for the inaugural ‘Nitro Madness at the Motorplex’ which will serve as the 2021 Spell Paving Services Funny Car Chaos season opener, March 26-27 in Ennis, Texas, presented by Victory Lane Quick Oil Change of Plano. This event will go down in history as the biggest Funny Car race of the century with a growing list of pre-entries now totaling 55 floppers! The current mark to beat for most Funny Cars on the property this century, verified by drag racing statistician Bret Kepner, is 53 from the 2005 World Finals in Pomona. With its appealing ‘run whatcha’ brung’ format the Funny Car Chaos series will welcome nostalgia, modern, nitro, alcohol, even twin-turbo and nitrous-assisted Funny Cars from coast to coast converge on Texas for this record-setting weekend.

A 24-car field will be qualified for the main event, split into A-B-C fields of eight on a three-round elimination ladder. Total prize money for this event has been increased to over $35,000. Additional support from Red Line Shirt Club, Napa Auto Parts of Waxahachie, Mears Mazda Volvo, Entech Oil and Best of Texas Barbeque Sauce have made these increased guaranteed payouts possible for the Chaos racers.

“Sometimes I just have to step back and say ‘wow,'” says series creator Chris Graves. “Four years ago, when we held Funny Car Chaos 1.0 I would have never believed we’d be seeing the car counts, racer support and spectator excitement for this series that we are today. With that support, we’ve been able to build on the same platform we started from at the beginning where the number one rule is ‘have fun’. This is a grassroots, low drama, big fun, family type atmosphere that is showcasing the most popular drag racing vehicles in history, Funny Cars! We’re in town to put on a show for the fans, period. I grew up a kid in the stands at the Motorplex, watching Dean Skuza, K.C. Spurlock and Kenji Okazaki pound the ground in their fuel floppers in front of capacity crowds. Fast forward 25 years and here we are hosting what will likely become the largest Funny Car race of the century at the place where my drag racing addiction was born courtesy of my father and grandfather, we’re very excited to say the least. The mid-west was lacking a competition-style format that appealed to the masses and Funny Car Chaos has put floppers back on the map and we’re ready to race.”

Over 70 Funny Car teams from across the United States have now competed in at least one of the 21 FCC events that have been contested since the fall of 2017. Over 50 teams joined the action in the pandemic-plagued 2020 season. Coming into the 2021 campaign, defending two-time Funny Car Chaos World Champion Ken Singleton will have a big target on his back as the winningest driver in the series. The competition will be stiff for Singleton and company as Funny Car teams across the nation set eyes on the Chaos winner’s circle this season.

“Teaming up with Funny Car Chaos for the inaugural ‘Nitro Madness’ event is like a dream come true for me,” says Andy Carter, Texas Motorplex General Manager. “Since my first day with Texas Motorplex, I have wanted a massive Funny Car show like Billy Meyer had here back in the day. The stories of Orange County with 64, the old photos of the cars lined down the track, the drivers with personalities bigger than life, dry hops and back-up girls. It’s all history now, but Chaos brings it back and we are about to rewrite the history books with one of the biggest, baddest Funny Car events in history. We’ve got concerts and live music every night, this is going to rock!”

Nitro Madness at the Motorplex doesn’t only offer a record setting field of floppers, but also features a full field of winged warriors from the Outlaw Fuel Altered Association, who are competing in their historic 25th Anniversary season. Capping off the entertainment will be the Dirty South Gassers, T.D.R.A. nostalgia drag racing series and heads-up Old School Backhalf series. More history is on tap as the Farris Racing “War Wagon” AA/Fuel Altered team and driver Kebin Kinsley will attempt to officially break the quarter-mile elapsed time and mile-per-hour records. But wait, there’s more! Live music both Thursday and Friday night, nitro-powered margarita machines and flame-throwing jet dragster action is also on the bill. Two days of Chaos, we can guarantee that! Make your plans to be a part of history, visit www.texasmotorplex.com or www.funnycarchaos.com for more information.