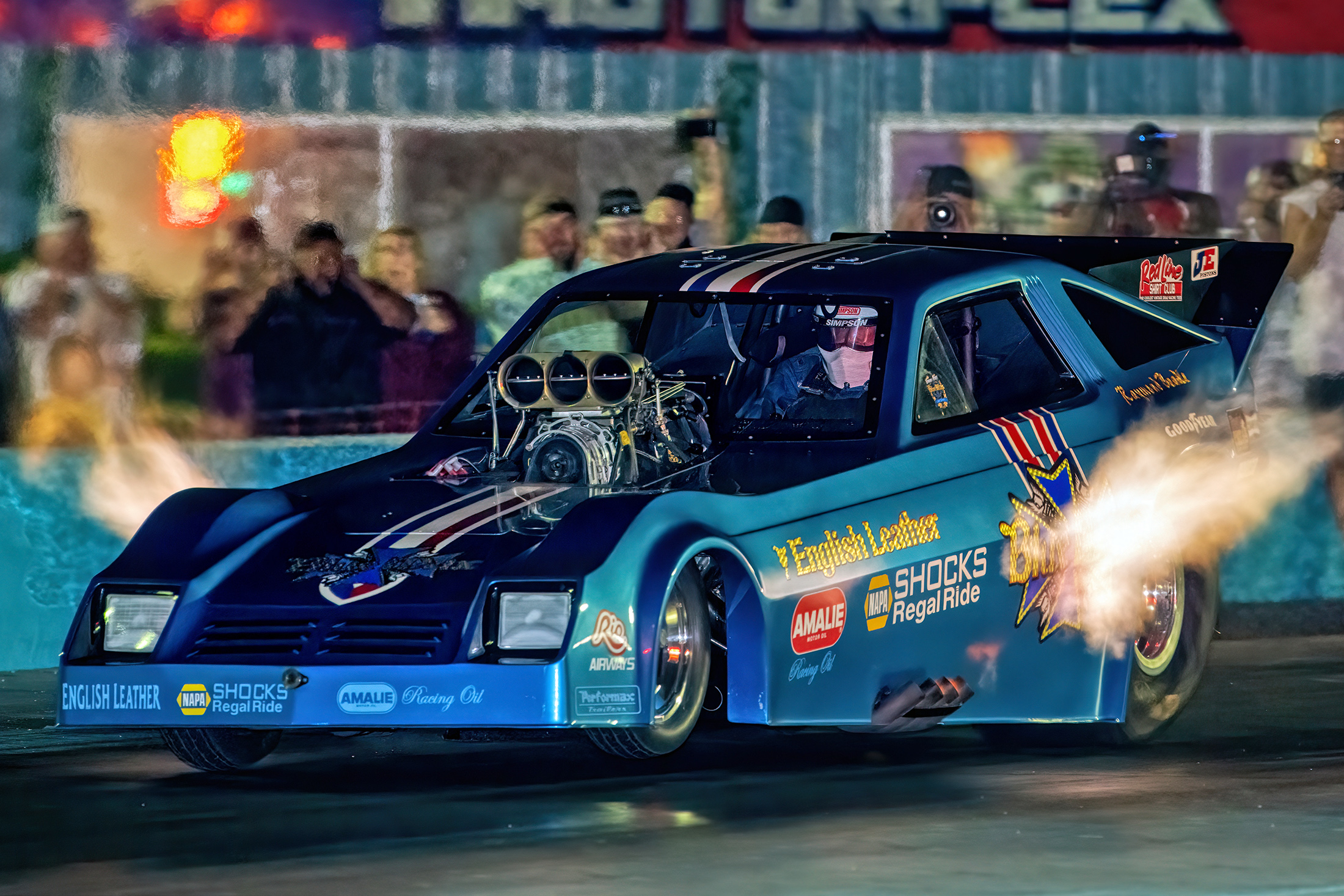 The Funny Car Chaos drag racing series has taken the funny car racing scene by storm since its inaugural event in September of 2017 in Texas. Twenty one events later, with over 70 different teams participating from across the country, the series will head into its third Championship season in 2021 and has a lot to look forward to.

The Chaos continues to gain steam with the signing of new title sponsor Spell Paving Services out of Texas which will propel the series to increased payouts across the eight race tour potentially reaching a guaranteed $30,000 per event across eighteen spots. Red Line Shirt Club has returned as title sponsor of the Championship points fund which is a guaranteed $10,000 distributed to the top five points finishers at the end of the season.

With no regulation on body style, engine combination or fuel used, Funny Car Chaos events attract a wide variety of floppers in their come one, come all approach. Nitro burners, screw-blown alcohol Hemis and big power Chevrolets are the most popular setups, but the door is wide open and rumors in the pits indicate a few injected nitro combinations and even a nitrous assisted package are headed for Chaos in 2021. The series was created by promoters Chris & Tera Graves to provide a grassroots, affordable and competitive drag racing platform while prioritizing the entertainment value and ground pounding action that funny cars bring to the sport of drag racing.

“Funny cars are the most iconic entity in drag racing and Funny Car Chaos has put them back on center stage as a main attraction at unique venues across the Southwestern and Midwestern United States. Racers can build their cars to their liking, experiment with new combinations and do it all within their allotted budgets instead of being required to spend unnecessary money and conforming to a rule book during their build. We strive to provide a series where racers, marketing partners and fans are told what they can do, not what they can’t do. The support from Chaos nation has been tremendous and it keeps us motivated to push forward for bigger and better things and next season is sure to deliver that,” says Chris Graves.

The old school approach is what seems to be working for Chaos, with back up girl contests, long smoky burnouts, dry hops and between round action including nostalgia gassers and the crowd pleasing jet cars. Competing at smaller venues where nitro and funny car shows headline the coming attractions each year has brought record crowds through the gates of these tracks that are the lifeblood of the sport. It’s great for the racers, it’s great for the venues and it’s a new and exciting entertainment option for the traditional drag racing fan who has been longing for something fresh at an affordable ticket price. 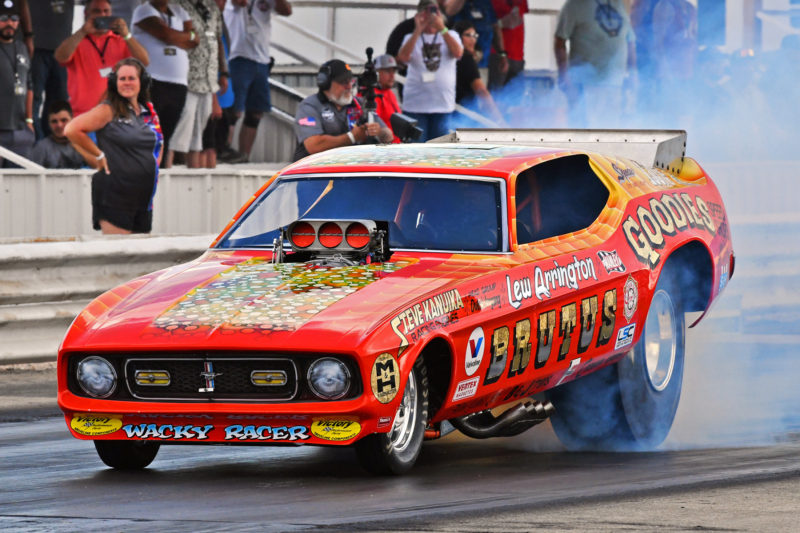 Ken Singleton will kick off the new season with a big target on his back as the two time defending series Champion in his alcohol burning Monte Carlo from Oklahoma. Singleton fought off stiff competition from Texan Chuck Loftin and his “Motivation” nitro burner and the Missouri based “Brutus” team of John Troxel and Chris Schneider. It was a thrilling season in 2020 as the series battled re-scheduling requirements due to the pandemic but was able to complete all eight scheduled events and attract 55 funny car teams from over a dozen states to compete in the Chaos this year.

The 2021 Spell Paving Services Funny Car Chaos Championship Tour, presented by Red Line Shirt Club, will kick off in epic form at the Texas Motorplex in Ennis on March 26-27 with a double feature event that will also include the season opener of the Outlaw Fuel Altered Association. This two day hootenanny is sure to be one of the largest drag racing events of the year in the lone star state with 200+ cars expected on the property and a fleet three second, 200 mile per hour performers. The series will return to Amarillo Dragway, Penwell Knights Raceway, Eddyville Raceway Park, Kearney Raceway Park, Mo-Kan Dragway and Alamo City Motorplex, all of which were host facilities in 2020. Added to the mix is an inaugural visit to Kansas International Dragway in Wichita, Kansas in July which will complete the eight race battleground. 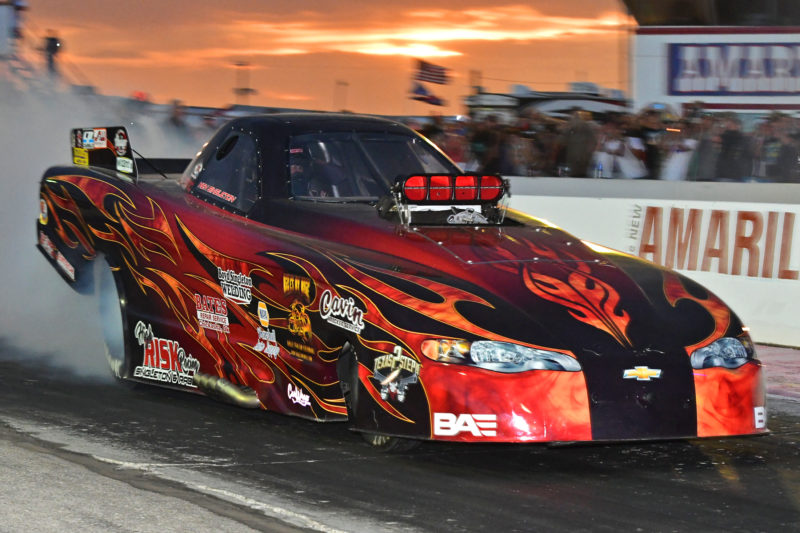 Putting the fun back in funny car, that’s what the motto is at Funny Car Chaos and it’s paying off for everyone involved as popularity and attraction continues to rise among racers and fans. The family environment in the stands and in the pits makes every event one where patrons feel over satisfied with their experience at the drag races. This is a spectator driven sport and with that in focus the Chaos will ride a lot of momentum into its next campaign.

More news comes from the ‘Chaos’ brand for 2021 with the recent announcement of “Nitro Chaos” which will be hosted July 30-31 at Iowa’s Eddyville Raceway Park. Anticipation is already building among the independent nitro teams across the country as this event welcomes any nitro burning drag racing machine to participate. The only rule, it must run a minimum of 80% pop in the tank. Fuel altereds, funny cars, dragsters of all kinds, door slammers, motorcycles, if it’s on fuel, it’s in! A guaranteed $30,000 purse has been posted with $10,000 to the ‘A’ Field winner. If you are a nitro connoisseur, you’ll certainly want to check this one out.