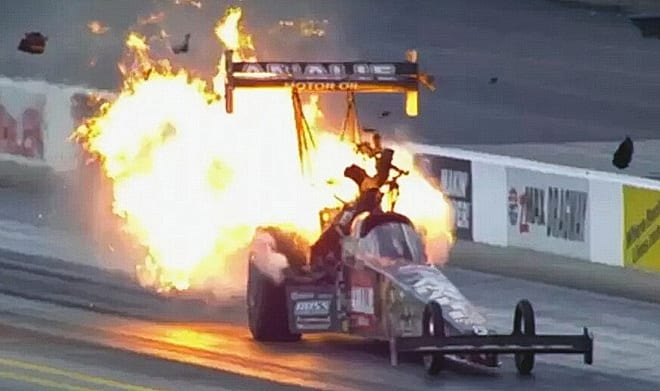 It’s the first round of eliminations for the NHRA Carolina Nationals and Terry McMillen, driver of the AMALIE Motor Oil INSTIGATOR Top Fuel Dragster, is leading Antron Brown at the start by .032 seconds. When McMillen reaches the 330-foot mark of the race, still with the lead, the tires begin to spin. McMillen lifts, lets the car settle, then hits the throttle again in an effort to maintain his potential win.

If the story ended with a loss it would be a happy ending. But it doesn’t end that easy. 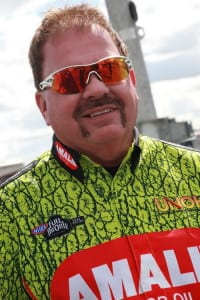 “I think fans paid to see a race,” a frustrated McMillen said Sept. 20, at zMAX Dragway, near Charlotte. “They don’t want to see a car with the lead idle down the track. It’s a driver’s instinct to pedal the car in a situation like this. I’m not going to lift and just wait for him to go around me without trying to do something. Is that the kind of racing people want to see? I don’t think so, but I’m afraid that’s where we’re headed – or an eight car field when they run the few remaining independents out of town.’”

Just before McMillen hit the throttle again the car dropped five of the eight cylinders, leaving an excessive amount of fuel in the intake manifold. Once ignited, the intake and injector split and oil escaped with the ensuing explosion. McMillen was charged with his fifth oil down of the season and second in as many races. The last two fines equal $14,000, enough to make McMillen consider hanging up his firesuit. McMillen had one of three oil downs in round one of eliminations.

“Right after the run the Safety Safari came over and wanted me to take a ride in the ambulance and get checked out, “ McMillen said. ” I told them I don’t need a doctor – I need a banker.”

“I said a lot things out of frustration during my top end interview,” McMillen added. “I meant all of it. We do have to evaluate where we are at. I have no idea how we’re going to get to the next race. But I know this, we’re going down swinging.” 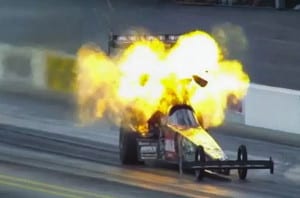 “NHRA came down here and looked at our parts after that run. You can see everything, rods, pistons, bearings, heck the block and crank are fine. Everything from the intake up – not so good.”

“I know we have to control oil downs. If it’s our fault – if we left an oil line off or didn’t tighten the rod bolts – that’s our fault. Fine me, we deserve that. But, if someone has an idea on how to contain oil from the intake or when it’s pumping out of the headers, I’m listening.

“We keep making bigger bombs with bigger fuel pumps and heads and then putting these cars on marginal tracks, stuff is going to happen. It makes the highlight reel. They’ll post it all over social media, use it on the T.V. show to get us to watch and fine us for it. Maybe we can get some royalties from that to help pay for the parts we need to get to St. Louis.”