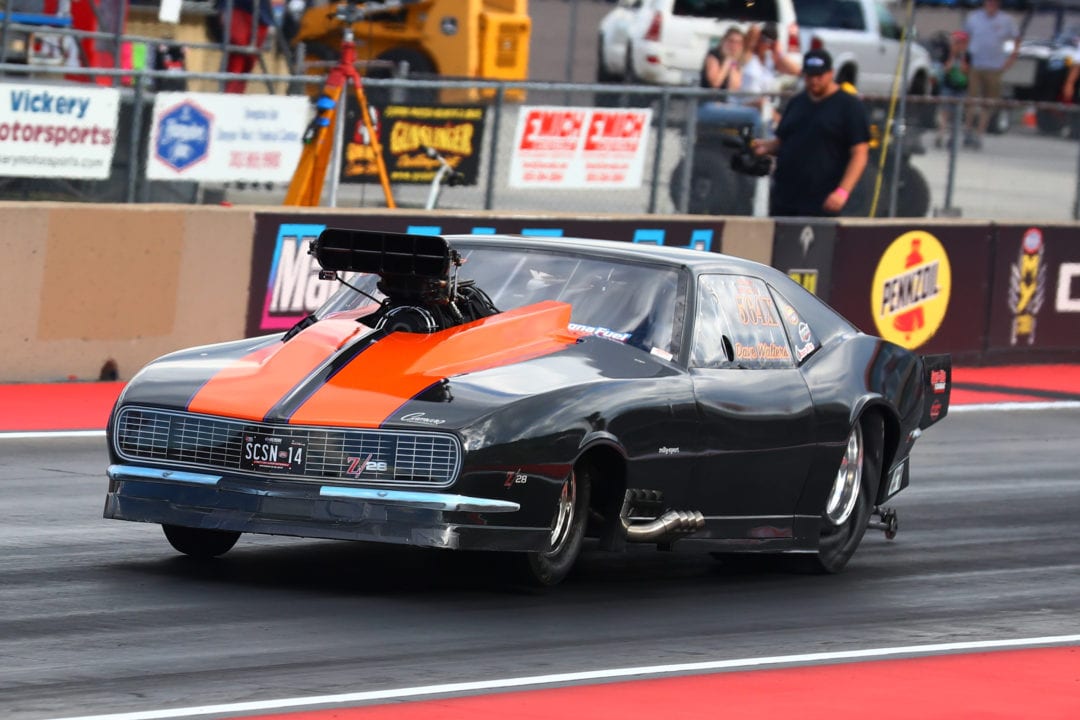 Dave Walters’ Pro Mod debut didn’t go as planned on Wednesday as he paid a visit to the sand trap in his blown Camaro during testing at the third annual Drag Illustrated World Series of Pro Mod at Bandimere Speedway.

On the bright side, things could only get better from there.

That’s been precisely the case for the Brighton, Colo. native, who has turned things around quickly to make a series of solid runs heading into Saturday’s eliminations.

Meanwhile, he’s had the time of his life racing 20 minutes from his home and in front of a huge crowd of family and friends.

“I’ve wanted to race here for three years,” Walters said. “We changed our whole combination for this race. Everybody wants to win $100,000. It would be badass to win.”

Walters has excelled in the Outlaw 10.5 ranks for a number of years, getting his start racing King Street and Top Sportsman on Thunder Mountain. He first started coming to Bandimere Speedway 15 years ago, but this weekend is a brand new experience for him.

He received his Pro Mod license in testing – after the trip to the sand – put on big tires for the first time and is now slugging it out with the elite in Pro Mod in Denver. In short, it’s been the weekend of a lifetime.

“This is where we wanted to come race and compete with the big boys,” Walters said. “I got my Pro Mod license and you need two drivers to sign off on it and one of them was Stevie Jackson, so that was pretty cool.”

That was a definite bright spot after an auspicious beginning where Walters didn’t let the chutes out in time before visiting the sand.

The team stayed up late to fix the damage – which wasn’t severe – and they quickly made it known they were going to be competitive this weekend.

“We spent all night work on it and made a good pass (Thursday),” Walters said. “It’s coming around. We’re not where we should be, but we’re stepping into it. These things are a handful, but I think we can be competitive. We’ll hope for the best and do what we can.”

Walters will enjoy every minute of it, much like he has the first three days of the event.

He’ll likely have one of the biggest cheering sections during eliminations, as Walters estimated upwards of 50 family members and friends will be watching him compete for $100,000.

No matter the result, that’s a massive – and memorable – win for Walters.

“We’ve got lots of people here cheering for us and it’s going to be cool to race here in front of my friends and family,” Walters said. “It’s going to be like a big, huge party. That feels pretty good.”