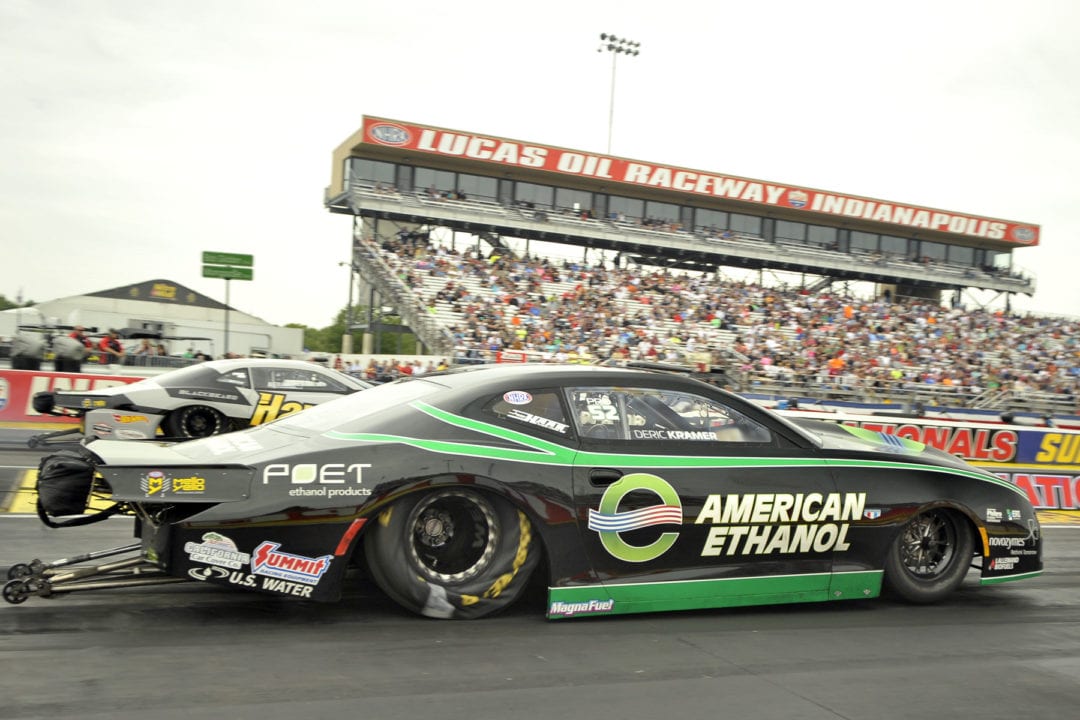 Deric Kramer, the 34-year-old racer from Colorado, is quickly making a name for himself in the highly competitive field of Pro Stock. After winning the first race of his career in Topeka last year, he followed that up with another win in Brainerd, and finished ninth in the world last year. In 2019, he has one win [Chicago] on his plate, and his American Ethanol Chevrolet Camaro is currently locked in the No. 6 points position as the field heads into the Countdown to the Championship after Indy.

Kramer’s first win was one that many drivers have never experienced, as he finished the final round on a Monday instead of Sunday. After rain caused the final two rounds of the session to be cancelled in Topeka, the remainder of the race got pushed to Monday. While it wasn’t the win he had been expecting, he says that it still tops the list of his favorite memories.

“I’ve never raced on a day that wasn’t a Sunday, and that was a new experience. It turned out to be a great day,” says Kramer.

And racing isn’t something Kramer is used to doing on Monday, as he usually spends that day behind a computer. His day job is a bit removed from racing, writing code for various iPhone applications. Even on Fridays, while Kramer is at the track trying to get his Pro Stocker qualified, he spends any time not on the track back in his trailer writing code.

“I’m fortunate that all of the companies who have hired me have been cool with me leaving on Friday and working from the racetrack,” says Kramer. “I’m writing code, then I’ll go throw my firesuit on and make a qualifying pass, then I come back and write more code.”

Although Kramer’s two passions seem to be at opposite ends of the spectrum, he says they’re both about building something that works that you can work on.

He says he’s on the lookout for an idea of an app he can build to help him on the racetrack, but he hasn’t found anything yet.

“I’m always trying to figure out something that I can do to actually see a benefit, and something that can help us. Currently I haven’t found anything, but any ideas are welcome!”

Going into raceday on Monday, Kramer says his strategy for racing in Indy isn’t any different, “We know every weekend that we have a chance to win, and we come out and try to make good runs every round, and if we can do that, that’s our goal.”

Kramer is qualified No. 9 with a 6.592 after five qualifying passes, and will face Fernando Cuadra in round one on Monday.

Outside of winning more races and a Pro Stock championship, Kramer says he would love to win a race from every qualifying position.