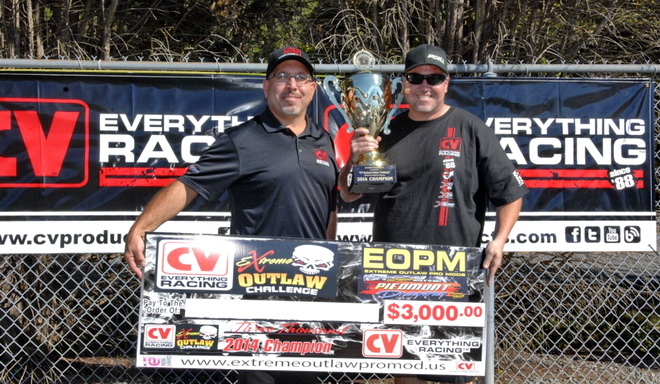 With beautiful weather on tap Oct. 18-19, Piedmont Dragway hosted the finals in several eliminators and a brand-new racing series several months in the making: the CV Challenge presented by CV Products, the home of “Everything Racing.” 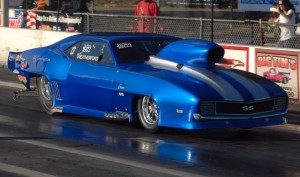 With $3,000 going to the winner, all eight competitors based on points earned during qualifying for Extreme Outlaw Pro Mod (EOPM) events this year, were loaded up for the challenge. They included Tommy Franklin (above right), Chris Rini, Todd Howard, Charles Carpenter, Chris Patrick, Jay Cox, Randy Weatherford, and Danny Perry. These eight would compete during qualifying for the EOPM/Big Dog combo race.

With 20 cars on the property, qualifying was quite a show in itself as competitors tried to get into the ultra-competitive, eight-car Big Dog field that would race on Sunday. Also on the bill were the Southeast Gassers, a series made up of gassers primarily from the 1960s put together by Pro Mod star Quain Stott and promoted by Don Nelson. 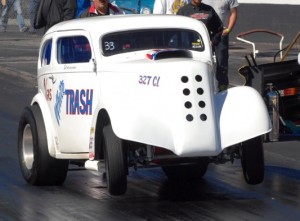 First, the CV Challenge was contested with first-round winners including Patrick, Cox, Weatherford, and Franklin. Low ET was a 3.80 by Franklin and top speed was Danny Perry, whose 199.82 charge went for a losing effort to Franklin. The semis saw Weatherford use a 3.85 to defeat a 4.32 by Cox, while Franklin used a 3.77 with a .020 light to defeat last years’ champ Rini, who went red off the start.

In the CV Challenge final, Franklin posted a .053 light en route to another 3.77 ET to defeat an off-the-pace Weatherford.

That set the stage for Big Dog qualifying. With nearly perfect air, the eight-car field was led by Todd Tutterow’s 3.73 at 200.08 mph—which reset both ends of the track records—though not for long. Franklin was second at 3.77 seconds, followed by Perry also at 3.77, and Weatherford at 3.79 seconds while also setting a new 201.11-mph speed record over the Piedmont eighth mile. 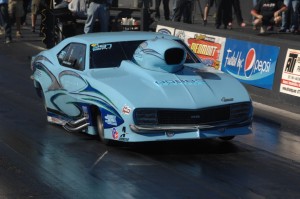 The bottom half of the field consisted of Rini at 3.801, Cox at 3.810, the always-competitive Stott driving Steve Vick’s Camaro at 3.852 and Travis Harvey getting in the field at a 3.869. This was important for Harvey as it solidified his position in the Big Dog championship points.

Eliminations were terrific as first-round winners included Weatherford in a come-from-behind effort over Rini as he used a .057 light with a 3.78 to defeat Rini’s better reaction of .038 at 3.82 seconds. Rini’s loss also clinched the 2014 Big Dog championship for Harvey, who held a three-point advantage heading into the round.

The semis were blazing fast as Franklin’s 3.75 beat Cox’s 3.84 and Tutterow ran 3.76 to narrowly defeat Weatherford’s 3.78. That set the final up as a classic nitrous versus blower battle, with Franklin’s nitrous-boosted ’69 Camaro taking the win by repeating at 3.75 seconds and 199.91 mph to defeat an early shut-off Tutterow. 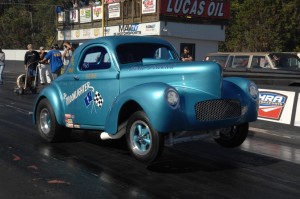 With Franklin having won both Pro Mod events for the weekend it probably was good he didn’t also have a gasser in the trailer as 11 of the “period-correct” Southeast Gasser machines put on a show with Donovan Stott defeating Shannon Smith in the final. The award for Mr. Gasser went to 80-year-old Gene Cromer, still racing the ’41 Willys he ran back in the day.

Renegade eliminator had nine cars on the property with low qualifier going to Brett Nesbitt’s 4.08 and Tim Lawrence, second at 4.11 seconds. Nesbitt fouled in the first round leaving Tim Lawrence to run Brian Schrader in the final with Lawrence winning with a 4.145 ET. Nesbitt still won the points title over Lawrence, however, so the day was not a total loss.