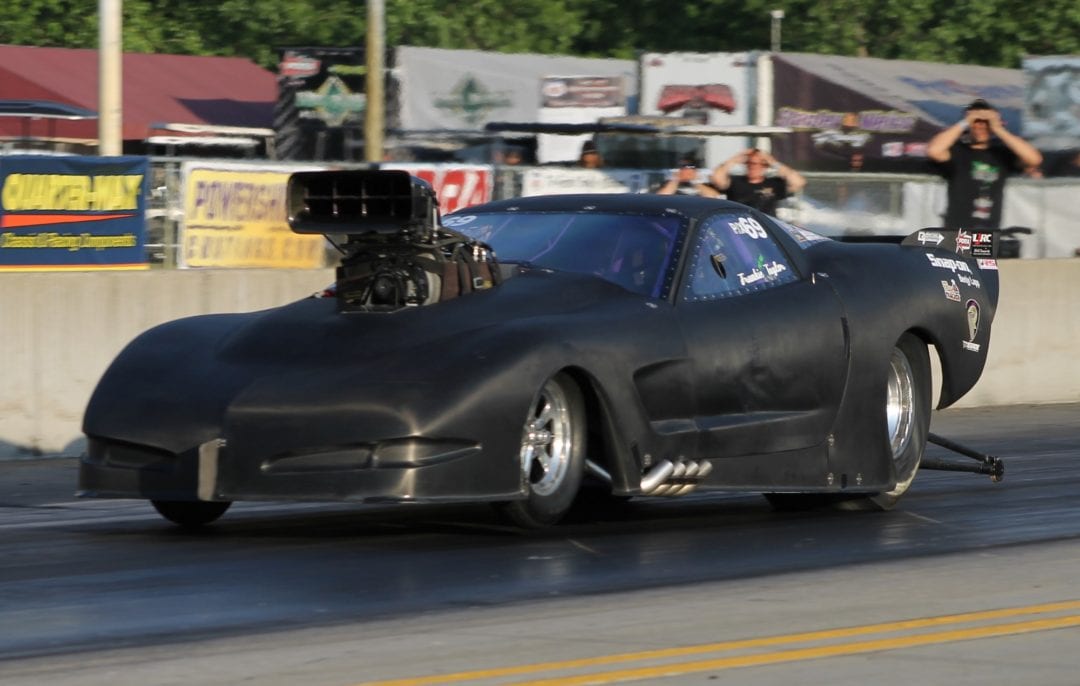 Frankie “Mad Man” Taylor has been in a self-proclaimed slump lately, but with a runner up at the PDRA Texas Nationals, followed by a win at the PDRA Summer Drags, he seems to be rising quickly back to the top of NAS Racing Pro Extreme competition.

“I’m adamant on getting the record back,” explained the Mad Man, who has held the PX record at 3.65, 3.62, 3.59 and 3.58 seconds. “Competing with the best means you have to beat the best. In Michigan, we did just that, beating Jason Scruggs and Brandon Snider on hole shots and turning on the win light. Doing so put us number three in points, which is our best points position in PDRA so far.”

Owner of Taylor Automotive in Dickinson, Texas Taylor still holds the quarter-mile blown, full-bodied outlaw record at 5.47 at almost 264 miles per hour. Although he’s confident he could go even faster with the knowledge he has gained since setting the record in 2014, for now his focus remains beating the best in the world on the eighth-mile.

“When we come out at Budds Creek it won’t have the same gear, compression ratios, camshaft,” Taylor continued. “We’ll build one motor back the same as our usual setup, and the other will be different. We are trying to figure out what Scruggs and Snider are doing to run big speed like they are, without doing a lockup. A long time ago with a clutch we went 204 without a lockup. It’s kinda fun to do something different. Everybody else is going to a lockup or that Liberty deal and that’s just a lot of money. We just keep working on our old stuff, trying to get it right. They showed us it could be done. We just gotta go do work now. Maybe we can repeat some of that stuff we had back in 2010 where we had a good year and ended up winning the championship. It would be fun and rewarding for my whole team to do that. A low budget team racing against these people that have millions of dollars and unlimited funds is quite phenomenal. Although, I do spend a lot of money doing this stuff. I just don’t spend the money they do.”

Taylor’s shoestring budget forces him to rely on innovation to stay competitive. He’ll sell old parts off his race car in order to buy new ones, fix what can be fixed instead of replacing it, and work on perfecting current technology before delving into new.

Although the Mad Man is thrifty in comparison to other professional racers, he is also aided by partners that help makes his operation competitive. “We’ve got great people like Snap-On’s Benjy Lapp, my wife Cindy, Andrew Alepa, Renegade Oil and Fuel, Larry Jeffers Race Cars, my brother and Crew Chief Paul, Jeremy Parsley, my daughter Emily, and my son Scottie.”

Everyone knows Frankie Taylor as “Mad Man” and it’s quite easy to see how the name fits. His Texas drawl can run a mile a minute and no matter what he does, he’s all in. His driving style is more never-say-die than play-it-safe. He’s bold enough to try anything and likes to criss cross the line of knowing when to quit. He once match raced Scott Palmer’s Top Fuel Dragster in his Larry Jeffers Corvette – and won. Still, the story of how his nickname came to be might just be one of the best Frankie Taylor stories that have come out of his 26 years of racing.

“It was at a Super Chevy Show, back a long, long time ago, back when I was a nitrous racer,” Taylor told the story, circa 1994. “We actually shook the doors off of it and busted out a window. We put a piece of cardboard in the window. When we did that somebody wrote ‘Mad Man’ across the entire door. We proceeded to go 199 miles per hour the next pass. They didn’t catch it until after we made the pass. So yeah we got in trouble. After that, Mad Man just stuck.”

Frankie “Mad Man” Taylor currently sits third in NAS Racing Pro Extreme points behind Jason Scruggs and Brandon Snider, who currently holds the elapsed time record at 3.486. Taylor will have his work cut out for him in taking back the record and championing the PDRA’s quickest and fastest category, but with a larger-than-life personality, stubborn determination and perhaps a little streak of crazy, the Mad Man might just have what it takes.