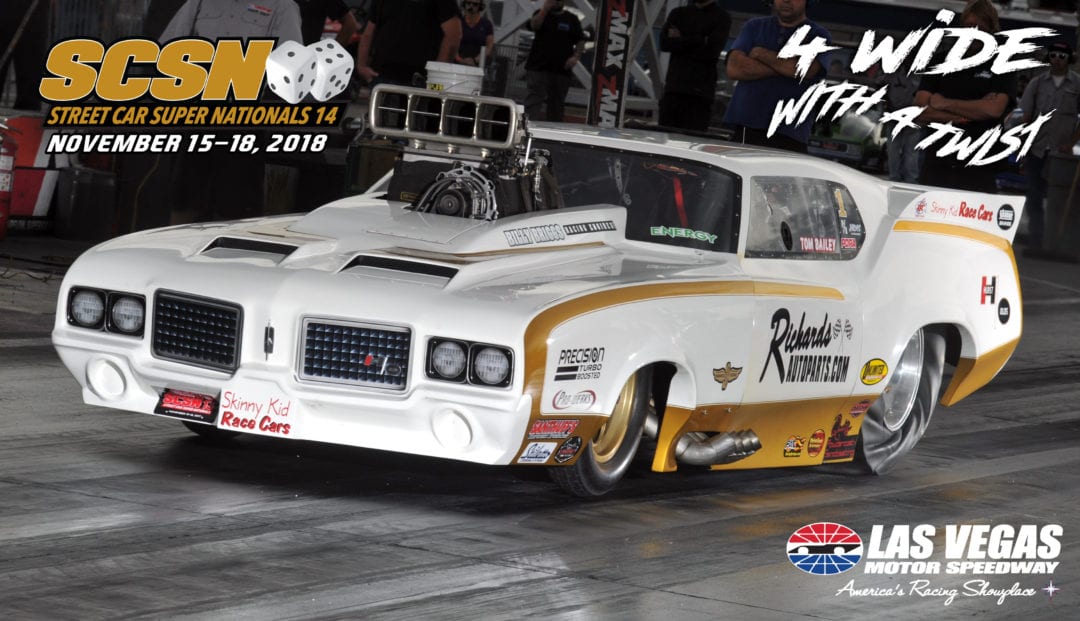 It’s the event designed to test the heartiest of racer. Drag racing is a sprint. The Nitrous Outlet Street Car Super Nationals 14 Presented by FuelTech is a four-day marathon with a legacy of record-shattering runs, dominating performances by the greatest in the world, and stunning upsets.

The bucket-list race is less than a month away, Nov. 15-18 at The Strip at Las Vegas Motor Speedway, with the drag racing world eagerly awaiting the first-ever 4-Wide(ish) SCSN. The plan, developed by SCSN Promoter and Premier Street Car Association President Mel Roth, creates one pair of lanes for Radial Tire classes and the other for Slick Tire classes. After sellout NHRA crowds arrived at The Strip earlier this year for its debut of 4-Wide West, Roth knew he had to find a way to utilize both lanes for his signature event.

“First, let me say, the only way this works is because of Jeff Foster’s amazing crew and Kurt Johnson’s talent as a track prepper! By using both sets of lanes, we can finish a Radial Tire class and then immediately start the next Slick Tire class. This makes a huge difference when it comes to down time on the race track. Now, instead of waiting for more racing while track prep is going on, we can prep the track and not interrupt the action.

“If you’ve never been to a Street Car Super Nationals,” Roth said, “you owe it to yourself as a racer or a fan to get out here for this one!”

New this season is the Ultimate 8, a $20,000 winner-take-all small tire no time shootout with racers from across North America already entered. Add this to the 15 classes, including Pro Mod and Outlaw 10.5, three Radial Tire classes, three No-Time Grudge classes, and six Bracket classes and you have the blueprints for another incredible weekend of drag racing. Throw in a huge vendor’s midway and swap meet and the fact you’re in Las Vegas the weekend before Thanksgiving, it’s a destination weekend for the entire family!

For more information on the Nitrous Outlet Street Car Super Nationals 14 Presented by FuelTech, visit StreetCarSuperNationals.com, or the official event page on Facebook by clicking HERE. For tickets, click HERE.