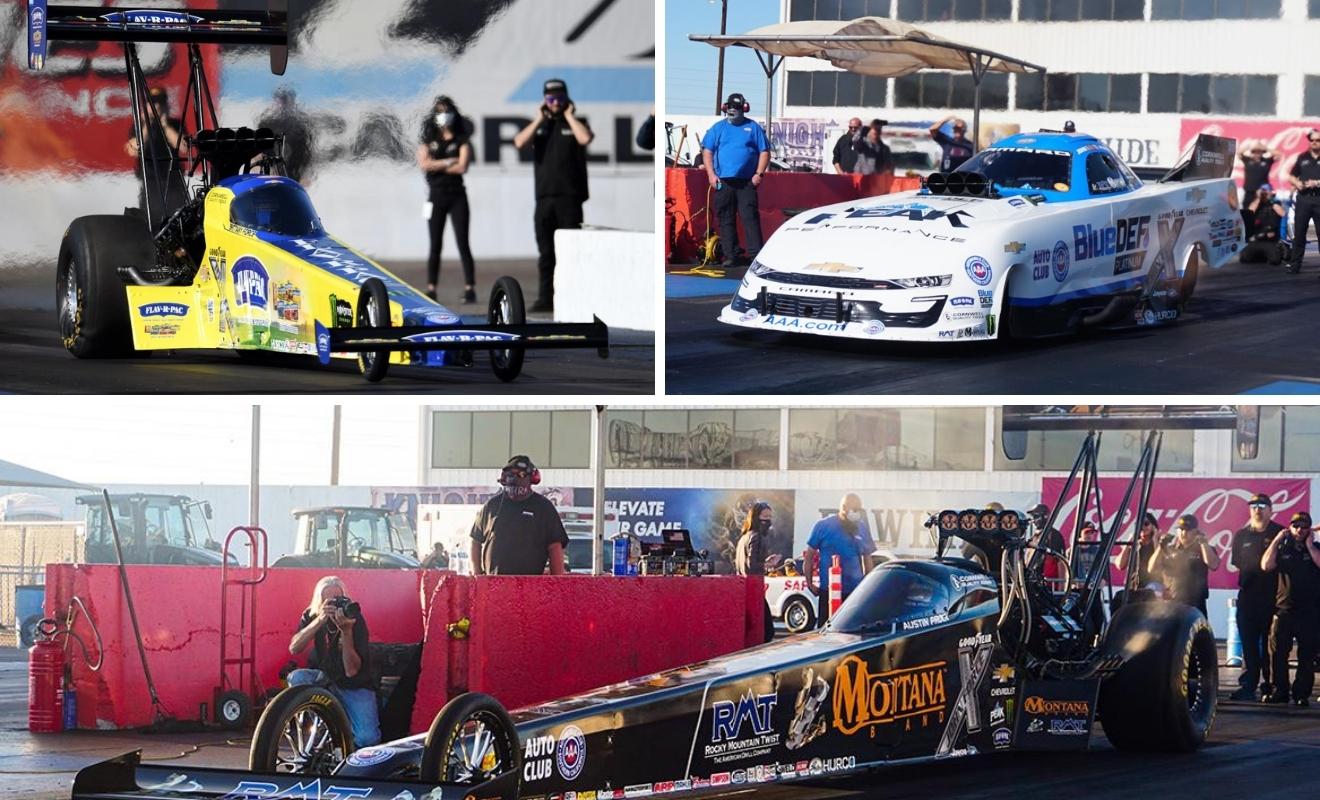 The turnaround continued for John Force and the BlueDEF PLATINUM Chevy as they pedaled their way to a 4.250-second pass at 211.93 mph to better Jeff Arend’s 5.950 at 116.09. In the second round, Force would catch reigning world champion Ron Capps on the starting line. Force’s 3.902 at 329.42 with a .052 reaction time would better Capps’ 3.869 at 327.74 and a .121 reaction time.
The win pitted Force against teammate and president of John Force Racing Robert Hight in the semifinals. Force would run into tire smoke for only a 7.231-second run at 86.59 in the PEAK Chevy while Hight would run 3.847 at 326.63.
“Not a bad weekend for this PEAK Chevy. Qualified decent you know, right there at No. 3,” Force said. “We went some rounds and if I have to lose, well then, I’d rather it be to Robert and that Auto Club car. They’re really something right now, and Brittany and Austin, they’re right in it too. We’ll keep on building, keep working. Danny Hood, Tim Fabrisi, they really pour themselves into this car. So, I’m looking forward to getting to Gainesville and going after it again.”
Brittany Force and the Flav-R-Pac team picked things up from qualifying to lay down an impressive 3.694-second pass at 321.96 mph in their first round of eliminations to end the day for Austin Prock and the Montana Brand / RMT team and their 4.105 at 248.02.
The victory would line Force up with rival and four-time reigning champion Steve Torrence in the quarterfinals. Despite having solid reaction times throughout the start of the NHRA Camping World season, Force would come up short on a hole shot loss to Torrence. Force would handle the Flav-R-Pac dragster to a 3.709-second run at 330.31 mph with a .132 reaction time but be bettered by Torrence’s 3.710 at 325.92 with a .075 light.
“Tough day for this Flav-R-Pac / Monster Energy team out here in a Phoenix. We qualified sixth and lined up with Austin Prock first round. We got past him but got beat in the second round. It was driver error. It’s tough – I got beat on a holeshot. We’ll pack up and head to the next one, put this one behind us and move forward.”
Austin Prock and the Montana Brand / RMT team have their race day cut short after their woes from qualifying follow them into first round. Qualified No. 11 and matched with teammate Brittany Force in the first round, Prock would pedal to a 4.105-second pass at 248.02 mph but it wouldn’t be enough for Force’s 3.671 at 333.49.
“Not the weekend we wanted but it was a weekend of growth. We learned a lot and had a tough first round match-up with Brittany. We had to go out there with our guns loaded and try to run a 3.65. We left hard and had the best sixty-foot on anyone all weekend, but the tires just came loose,” Prock said. “It was a good opportunity for me to learn and I got it to recover and got it down there. I learned a little bit on my end and the crew chiefs learned. We’re going to go to Gainesville and try to go to the finals again.”
The 2022 NHRA Camping World Drag Racing Series season continues March 11-13 with the Amalie Motor Oil NHRA Gatornationals at Gainesville Raceway.