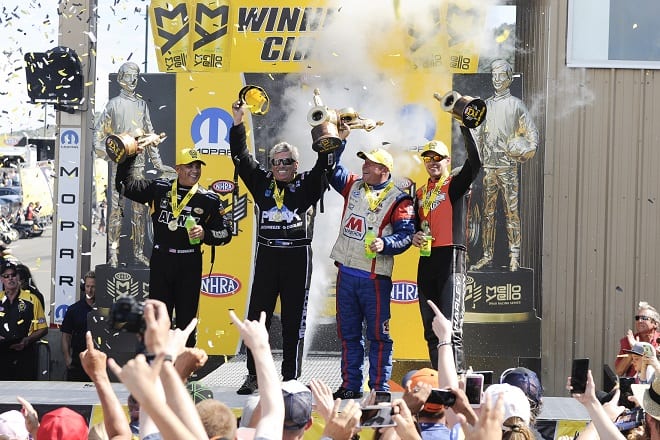 It was the first win of the season for both legendary drivers, who have earned the most world championships and victories in Funny Car and Top Fuel, respectively. They gave epic performances to the national television audience watching the finals live on FOX. 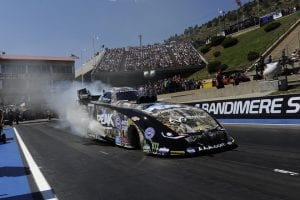 Force defeated his daughter Courtney in a close Funny Car final. In a battle between Chevy Camaros, he finished in 3.965 seconds at 319.45 mph in his Realtree Peak Antifreeze Camaro to her performance of 3.963 at 314.75 in her Traxxas Camaro.

It was the elder Force’s first win of the season, seventh at Denver and 144th of his career. Force hadn’t won a race since June 2015 in Epping, N.H.

“I didn’t have a monkey on my back, it was a gorilla,” said Force, the 16-time world champ who at age 67 becomes the oldest driver in NHRA history to win a Funny Car race.

“Let’s face it, the competition is the best I’ve ever seen,” Force continued. “It’s tough to race my little girl there and it was a close one. I can do this game. I love it. I don’t have anywhere to go. I am going to keep doing this. I want to keep building this sport.”

Force, who also made history earlier in the weekend by clocking the first three-second Funny Car run ever at Bandimere Speedway, outran Jeff Diehl, Matt Hagan and defending world champ Del Worsham to advance to the final. In the final against his daughter he said he needed to totally forget who was in the opposite lane.

“I needed this real bad,” Force said. “I told Courtney I love her, but I am giving this everything I’ve got. Let’s face it, we’ve been getting beat up lately by the Schumacher and Kalitta teams. It’s a great day to come here and look like we know what we’re doing.”

Schumacher, an eight-time world champ, also busted out of a lengthy winless streak and claimed his first win of the 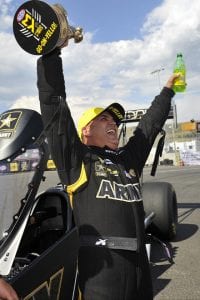 season, third at Denver and 82nd of his career. He outran the defending world champ, Antron Brown, in the final round with a run of 3.802 at 324.28 in the U.S. Army dragster. Brown’s Matco Tools dragster slowed near mid-track and finished in 5.199 at 144.75. Schumacher, who climbed to fifth in the points order with the victory, hadn’t won since July 2015 in Chicago.

“To win one of these trophies you have to beat some bad dudes, and we beat a bunch of them today from Doug Kalitta to Antron Brown,” said Schumacher, who outran Kalitta in round one, top qualifier Steve Torrence in the quarterfinals and Clay Millican in the semis to advance to the titan final round meeting with Brown. “I’ve enjoyed great moments in racing during my career, but coming back from a huge deficit when people have counted you out like we have done this weekend is the most satisfying to me.”

With the runner-up finish, his sixth final round of the season, Brown maintained the points lead, 57 over second place Kalitta.

In Pro Stock, Johnson continued his long run of success at Bandimere Speedway as he won the event for a record seventh time in his 10th consecutive final round appearance here, also a record in his category. He powered his Marathon Petroleum Dodge Dart to a 6.982 at 197.34 to hold off the Mountain View Tire Chevy Camaro of Vincent Nobile, which trailed with a 7.037 at 196.82.

“We stunk the place up all weekend during qualifying,” said Johnson, who raced past Drew Skillman, defending world champ Erica Enders and Summit Racing stalwart Greg Anderson to return to the final. “I wouldn’t have given us a one percent chance to win all weekend. The magic up here is just on our side for some reason. We’ve done it for Mopar all those years and now we get to do it for Marathon and Mopar.”

He said his semifinal win over Anderson was especially sweet. Anderson and points leader Jason Line, who lost in the semis to Nobile, combined to win the first 13 races of the season.

“I am sure I am speaking for everyone in the pits, but to break that juggernaut is big,” Johnson said. “We might have got a break or two along the way, but I guess that was that mountain magic. It was great to win here for all the great Denver and Mopar fans and to get the win on live TV on FOX.”

Hines became the winningest Pro Stock Motorcycle rider in history, capturing his 45th career win by outrunning teammate Eddie Krawiec in the final round. Hines took his third win of the season and fourth at this event by posting a track record time of 7.134 at 188.33 on his Screamin’ Eagle Vance & Hines Harley-Davidson to hold off Krawiec’s Screamin’ Eagle Harley, which trailed with a 7.148 at 187.21.

It was the third consecutive final round appearance for five-time and defending world champ Hines, who defeated Scotty Pollacheck, Cory Reed and LE Tonglet to advance to the final. 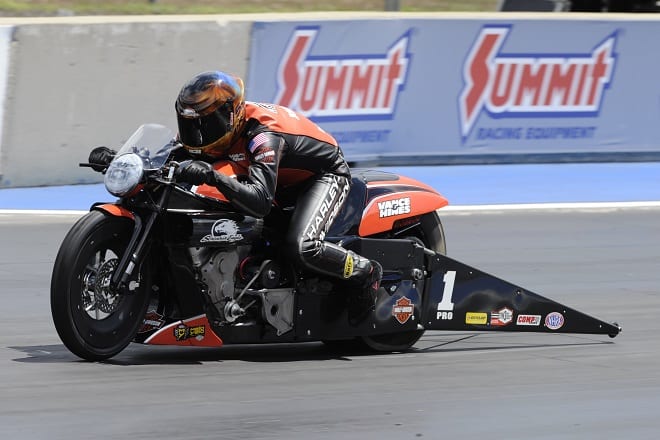 “It doesn’t get much better racing up here in the mountain with the thin air requires a different setup,” said Hines, who trimmed Krawiec’s points lead to 109. “Coming back to win on the mountain, it means a lot. My team has had my motorcycle really dialed in right now. It is our third final in a row and I am just riding the wave. I don’t think I’ve ever put eight runs like that together in a weekend. The bike is such a joy to ride right now.”

The NHRA Mello Yello Drag Racing Series continues with the second stop of the Western Swing, the Toyota NHRA Sonoma Nationals next weekend at Sonoma Raceway in Northern California.