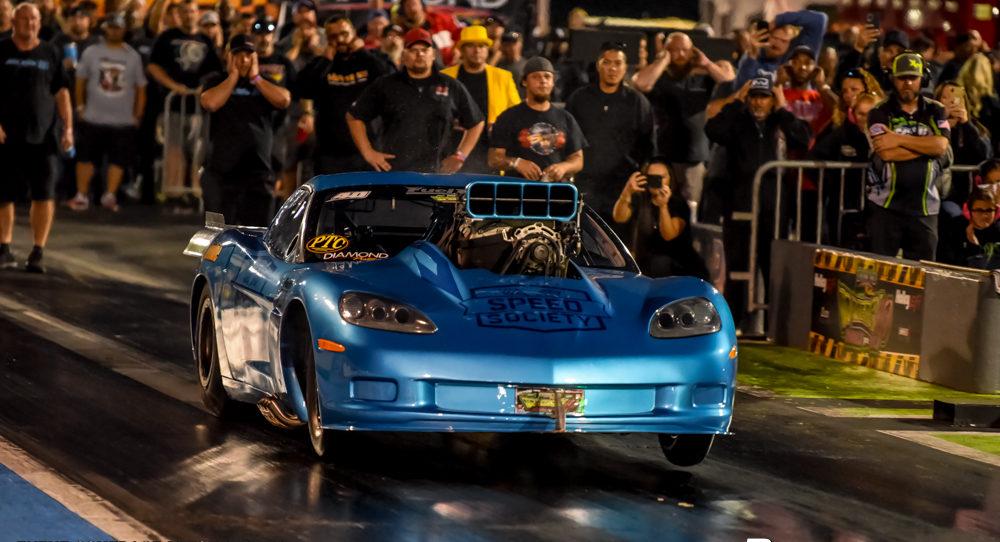 Well, almost nothing did and yet the ever-ambitious Laughlin arrived at Texas Motorplex on Saturday, mission accomplished and another impressive, out-of-the-box success to his credit.

The sport’s ultimate utility man raised his own bar this time, and once again he triumphed with an emphasis on unique.

Laughlin raced in Pro Stock on Monday in Charlotte, in his Radial vs. the World supercharged Corvette Wednesday through Friday in Valdosta, and then back in his Pro Stock Camaro on Saturday and Sunday in Dallas.

“More than anything, I’m just fortunate to put some of these crazy deals together and get it to work out,” Laughlin said. “One of the big things I shoot for is just to be different. I feel like what I did this weekend is a bigger story and have more publicity than just running one race. It’s been pretty exciting, that’s for sure.”

What follows is the organized chaos Laughlin traversed through, adjusted to and, ultimately, thrived in to compete this weekend. His goal was to race in RvW at No Mercy 10 in Valdosta and Pro Stock at the Texas NHRA FallNationals in Dallas in one weekend, and here’s how Laughlin, who advanced to the No Mercy 10 quarterfinals, did it. 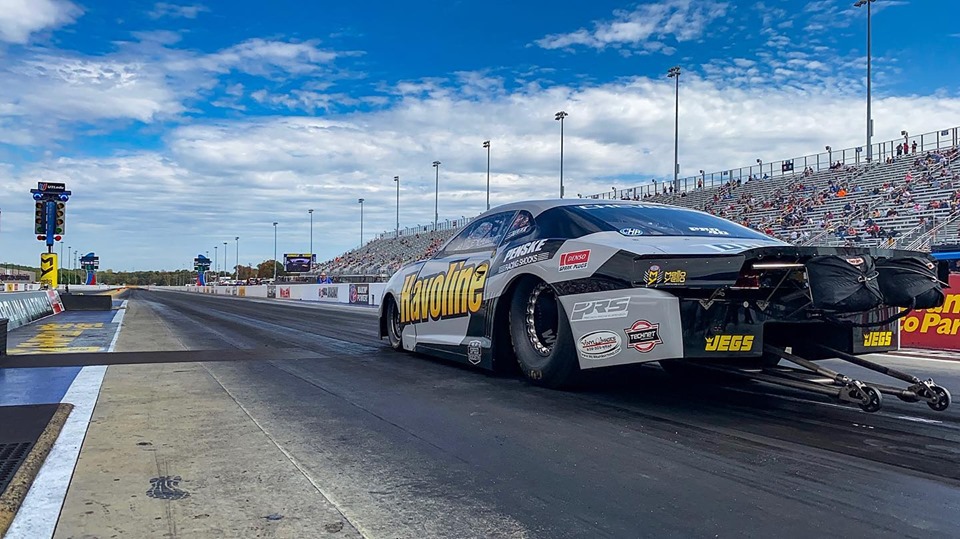 Due to rain, the conclusion of the NHRA Carolina Nationals in Charlotte were pushed back a day, which was only a preview of the weather maladies Laughlin would face. The U.S. Nationals winner was bumped out in the first round and immediately shifted focus to his RvW Corvette.

Before heading to South Georgia Motorsports Park, the Lights Out 10 winner spend the day at FuelTech, which is north of Atlanta, to run on their hub dyno.

“We just swapped everything over FuelTech and didn’t have time to test, so we spent a day on their dyno. Things went really well,” Laughlin said.

From there, Laughlin loaded up and headed four hours south to SGMP. By this time, he already had several flights book to hopefully cover all scenarios.

“I made sure to book a couple flights each day so I could plan for the best,” Laughlin said. “I had to be super flexible. Whatever flights I wasn’t using, I just cancelled. It was the best preparation I could do.” 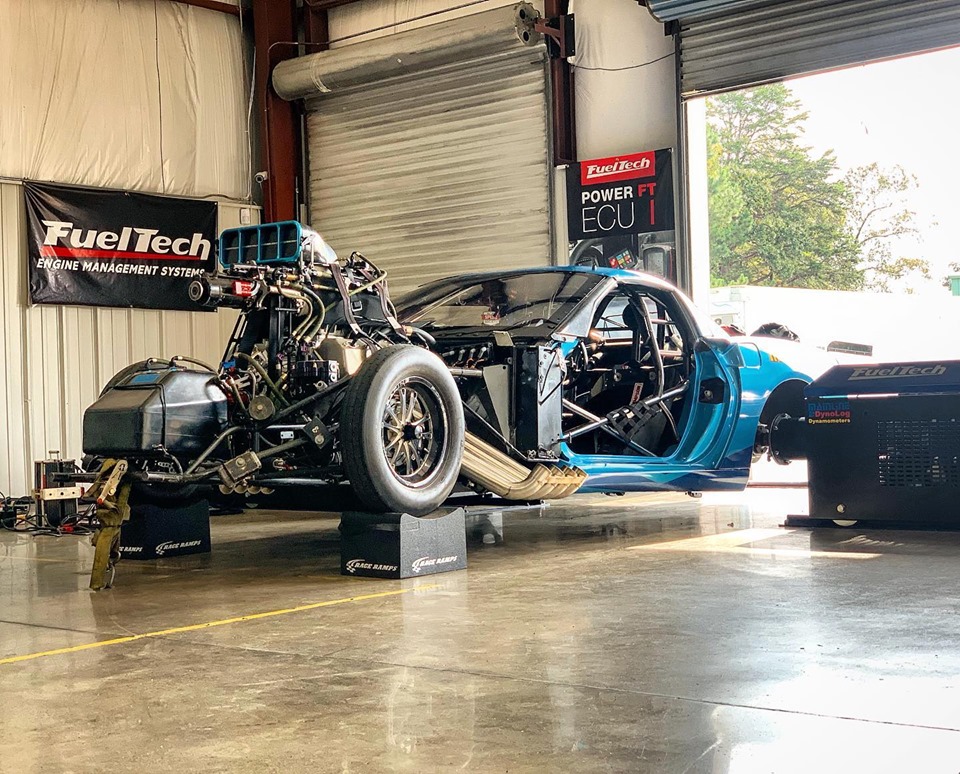 The original plan was to qualify Wednesday and Thursday at No Mercy, fly to Dallas and qualify in Pro Stock on Friday, head back to Valdosta on Saturday for RvW eliminations and return to Dallas on Sunday for NHRA eliminations.

But that plan got scrapped quickly as weather conditions changed almost everything.

But first, Laughlin and his RvW team, led by Frankie Taylor, started qualifying at No Mercy with a solid 3.778 at 200.47 mph, putting them firmly in the field. The change to FuelTech was already a success, which put Laughlin off to a good start.

“It took a little adapting, but we’re absolutely pleased we made that change,” Laughlin said.

With the chance of inclement weather almost a forgone conclusion for Saturday, the decision was made to cut qualifying on Thursday after four sessions, and move directly into eliminations on Friday.

That changed Laughlin’s plans, who now would stay at SGMP and fly to Dallas on Saturday to qualify in Pro Stock.

“When (promoter Donald Long) made the change to race on Friday, it threw things off, but it was better for me because I didn’t have to go back and forth,” Laughlin said. “I just had to make one trip.”

Laughlin also delivered an even better run during final qualifying, moving to fifth with a stout 3.675 at 203.52, just off his career-best of 3.65 that came in far better conditions earlier this year. That gave Laughlin confidence heading into the eliminations, believing he would have the chance to win No Mercy the next day. As if he hadn’t already proved it, competing in Long’s wildly-popular drag radial events meant a great deal to Laughlin, and after racing at Lights Out and the Sweet 16 this year, he wasn’t missing No Mercy.

“That was totally the case, especially with there only being three Duck races each year. I couldn’t let myself miss it,” Laughlin said. “We unquestionably have one of the baddest radial cars in the world and we couldn’t let it sit in the shop. This was all worth it.”

This was a blur of a no-sleep day, but Laughlin nearly made the most of it. He ran 3.718 at 202.48 to open eliminations with a win, following it with a 3.728 at 203.13 to beat defending No Mercy winner Jeff Naiser. That put him into the quarterfinals and, with Laughlin having to race in Pro Stock the next day, he believed eliminations would be wrapped up that night if he kept advancing.

But he suffered heartbreak the next round, losing by a soul-crushing .001 to Timmy Meissner. Laughlin went .002 on the starting line and ran 3.734 at 204.45 in the razor-thin defeat. Still, Laughlin had plenty to smile about.

“We haven’t really pushed the car yet and we didn’t have as much qualifying this week, so we were maybe a little timid,” Laughlin said. “But you have to race smart on raceday and make clean runs and we did that.

“There’s no doubt in my mind this car will be in the .50s soon. And it’s one of the few full-sized cars left, so that’s pretty cool.”

While still lamenting the loss, Laughlin was gearing up for Dallas. A heavy rainfall was expected on Saturday, so Laughlin knew he needed a sure thing when it came to his flight. That meant making a trek to Atlanta, which also meant a three-hour Uber ride. It’s also when Friday turned into Saturday. 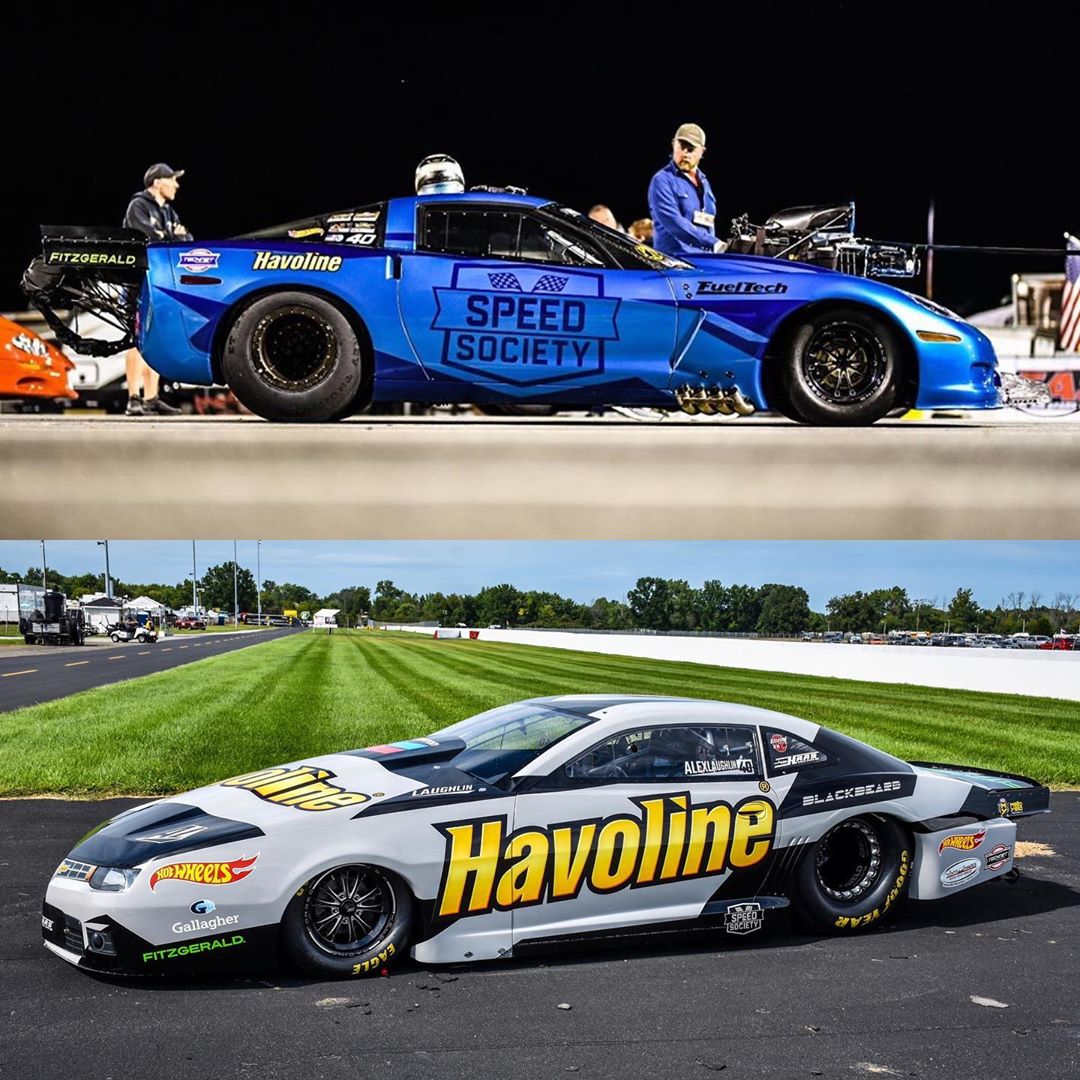 Laughlin didn’t even leave SGMP until almost midnight, but three-plus hours and $313 later, his Uber dropped him at the airport hotel after 3 a.m. Laughlin estimated he slept about 90 minutes before his alarm went off to make the 6 a.m. flight from Atlanta to Dallas.

He arrived at Texas Motorplex around 10 a.m. CT, low on sleep but still filled with excitement.

Laughlin was also behind the eight-ball. Running RvW eliminations in Valdosta on Friday meant missing the prime qualifying conditions in Dallas that same night. Still, it was better than not making a qualifying run at all.

“That would have been devastating for sure,” Laughlin said. “How this all worked out was absolutely the most favorable scenario with the exception of the heat in qualifying (on Saturday). Everything else is really good.”

Laughlin qualified 15th in the much warmer conditions on Saturday, running 6.616 at 209.14. Unfortunately, that put him against Elite Motorsports teammate Erica Enders in the first round on Sunday – a rematch of the U.S. Nationals final round – which made for some tough sledding, as Laughlin fell in the opening round of an otherwise memorable weekend.

Still, Laughlin couldn’t be happier with how this blur of a week has gone. He completed the two-car, two-series, two-tracks, two-states weekend, further raising the profile of one of the sport’s breakout stars.

“It’s really wild, but it all worked out,” Laughlin said. “I started running the radial stuff barely over a year ago, but after Lights Out 9 (in 2018), I knew that’s what I liked doing. I wasn’t going to miss one of those races, and we’ve had such a great year in Pro Stock. It has been really exciting to see it all come together.” 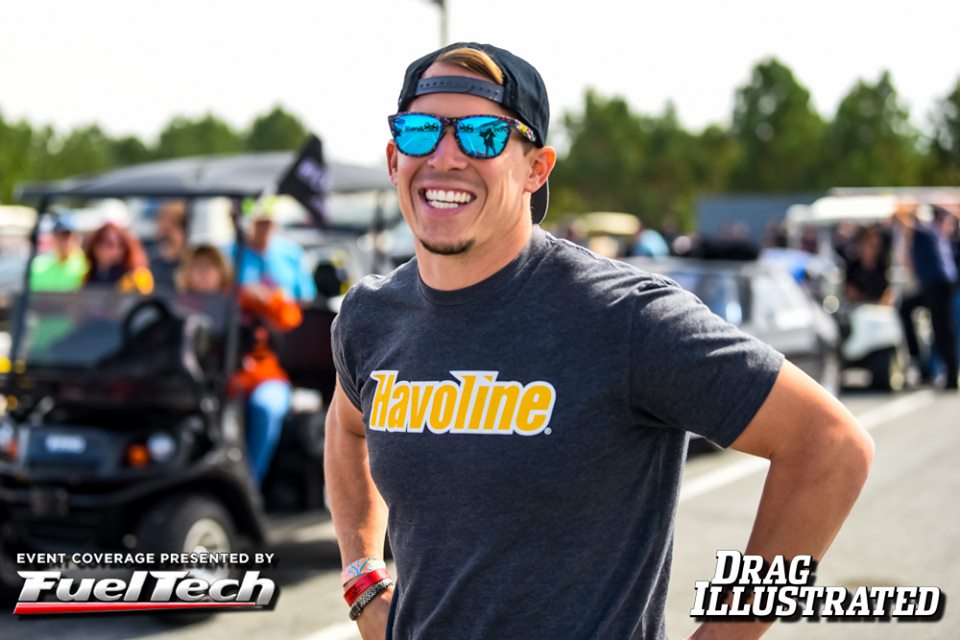