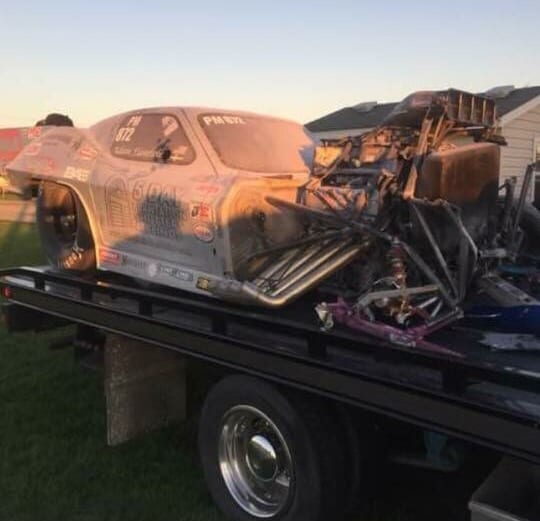 Swedish Pro Mod pilot Adam Flamholc is racing at Gateway Motorsports Park this weekend as part of the Street Car Super Nationals: Anarchy Under the Arch IV. Not unusual, as several incredible Pro Mod aces are also coming to the St. Louis-area facility to compete.

What makes Adam’s case unique is that he destroyed his car last weekend at Route 66 Raceway during an event there.

“Well, in the last qualifying round, the car – we had made three solid runs when we qualified No. 1 – steered to the right and I lifted,” Flamholc said. “We took the car back and I took it apart, checked the shocks, checked everything, couldn’t find anything wrong.

“In the first run of eliminations, it did the same thing; went straight to the right. When a car like this goes to the right, there’s something wrong with it. It should go to the left because the motor steers them to the left. I lifted and steered it back to the groove and I slowly got back on it and the car started bouncing from side to side. My foot bounced a couple times on the accelerator a couple of times and I hit the left wall – hard – after the finish line.”

The beautiful ’63 Corvette Flamholc raced is now being front-halved. So what’s a racer in need to do? That racer goes out and buys a new car, a 2012 Mustang to be precise. And he’s bringing it to Gateway this weekend.

“Yes, sir,” he said. “We went and got it and we’ve been working 24/7 with it since Sunday. There was more work that needed to be done than we expected. We had to take the motor and the transmission and some things out of the old car and then we found some stuff on the new car that we didn’t like, so we had to change a lot of things in it. We had to move the X bar in the middle to get the transmission in it and move a lot of new stuff everywhere, but we have like six or seven people working nonstop on it.

“It looks good. We will have it ready (Wednesday) evening and we will be in St. Louis testing Thursday.”

While the international drag racing star did plan on purchasing a new car, one that is quarter-mile legal in order to race full time in America next season, Flamholc didn’t necessarily plan on having less than a week to actually buy it and turn it around in order to race with it.

“But this is kind of extreme.”

The Street Car Super Nationals: Anarchy Under the Arch IV is Friday and Saturday at Gateway Motorsports Park. For more information, visit StreetCarSuperNationals.com. The event can be viewed live and free at Bangshift.com with up-to-the-minute updates provided at the event’s official page on Facebook, Facebook.com/SCSNGateway.