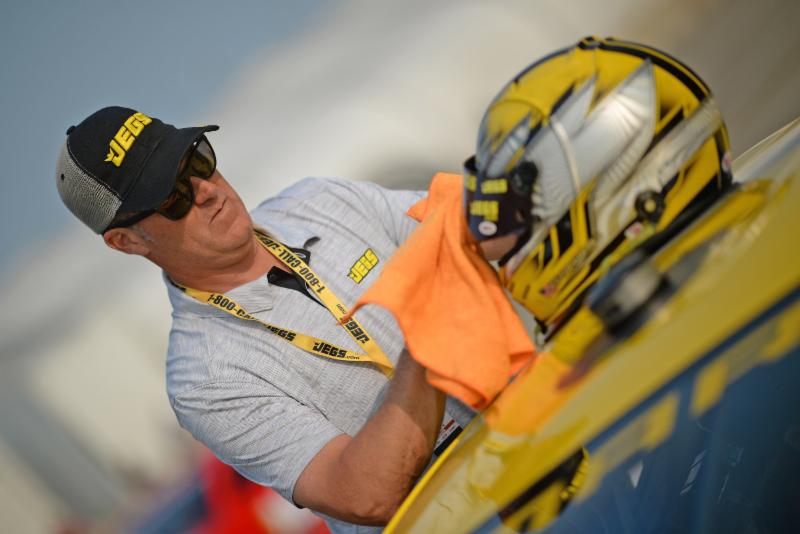 The gaps in the NHRA schedule where Pro Stock cars do not compete are over with the start of the vaunted “Western Swing” of consecutive races in Denver, Sonoma, Calif., and Seattle and five-time class champion Jeg Coughlin Jr. is pumped up about racing his JEGS.com Elite Motorsports Chevrolet Camaro again.

“I’m excited to resume the title chase with my Elite teammates,” Coughlin said. “What better place to get back into the swing of things than Bandimere Speedway. It’s one of my favorite tracks on the NHRA tour and definitely one of the most picturesque of them all. Plus, we have a long relationship with the Bandimere family and just love coming here.”

In the time since the last Pro Stock race four weeks ago in Norwalk, Ohio, Coughlin managed to participate at the SFG 500 high-dollar bracket race in Martin, Mich., where he piloted his JEGS.com Chevy II wagon to a semifinal finish in the $525,000-to-win main event.

“We had some fun in Martin and got in a ton of laps,” Coughlin said. “Of course, my Chevy II wagon and this Pro Stock Camaro are polar opposites to drive but we feel like have good momentum coming off a semifinal finish in Norwalk. We got into a pedal-fest with my teammate Alex Laughlin that could have gone either way so we had a chance to be in another final there.

“The guys had some stuff they wanted to clean up with the car and plus the preparation for Denver is always an extra challenge but I know we’ve got a championship group here and we’ll be ready to roll.”

The time off between races also allowed Coughlin to watch his son Jeg III compete in two golf tournaments. Jeg III is an accomplished collegiate golfer who played for Ohio State University before taking a recent sabbatical.

“I think his passion for the game was reignited at last month’s Memorial Tournament back home and he’s been back at it ever since,” Jeg Jr. said. “He shot 12-under in the Ohio Open, which made him low amateur and was good enough for fifth overall. He then won the Muirfield Village Golf Club Championship, another three-day tournament, with a three-under par score.

“I get a lot out of watching him compete and enjoy his competitive drive. He’ll be joining us on the Western Swing as well so maybe we’ll get in a few rounds out west.”