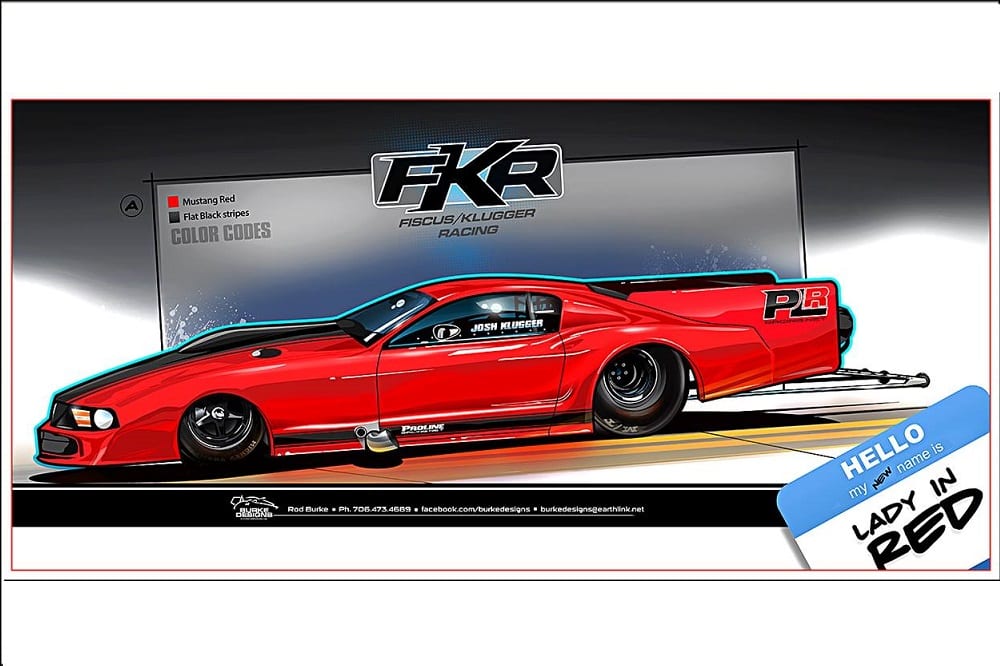 FISCUS/KLUGGER RACING (FKR) had an incredible season in 2016 with multiple high-profile wins and word records, and the FKR Racing team has once again raised the bar with the announcement that driver and team co-owner Josh Klugger of Ocala, Florida will soon be joining the Pro Mod ranks.

PLR power will still remain under the hood, but the team plans to swap to a new, NHRA-legal PLR Hemi engine backed by a Proformance Transmission and ProTorque converter combination. Boost will come from a set of twin Precision turbochargers, and the car’s current, state of the art FuelTech FT600 engine management system will be on board for precise power delivery. For the suspension setup, FKR tapped “The Shock Nerd” Mark Menscer of Menscer Motorsports to ensure the Mustang’s backend stays firmly planted and that the most power possible is transferred to the racing surface via the car’s sticky Mickey Thompson tires.

The most significant change, however, is that the car will be transformed from its familiar blue flame paint scheme to a stunning new red hue by Visual FX in Jacksonville, Florida, once its stay at Vanishing Point is completed. Inspired by his red Mustang GT350R street car, Klugger’s refreshed ride – known as the “Lady in Red” – will certainly be a head-turner. This will be Klugger’s first foray into the world of Pro Mod racing, and he couldn’t be more excited about the opportunity and the car’s potential.

Klugger plans to run in the NMCA series for the 2017 race season in the VP Racing Fuels Pro Mod class as well as at select NHRA Pro Mod events and various other standalone races including Shakedown at the Summit, Street Car Super Nationals, the Orlando World Street Nationals, and others. He also plans to run FKR’s infamous Racecraft-built, 526 ci Pro Line Racing 481X-powered twin turbo radial tire ’93 Ford Mustang at select radial tire races such as No Mercy and Lights Out, World Cup Finals, and more, and will continue to work with co-driver Kevin “Flash” Fiscus and crewman Johnny “Drama” Maguda.

Both Fiscus and Klugger are well respected for being among the best in the world when it comes to both radial tire and Pro Mod racing. For those who wish to join this proven, record-setting team which has also won multiple prestigious races over the years, Fiscus and Klugger will be available to discuss marketing partnerships and sponsorship opportunities for 2017 and beyond.