Another visit to South Georgia Motorsports Park, another historic run for Kevin Rivenbark. This time, he’s the first to the 3.50s on radial tires.

The incredible progression of Rivenbark in his ProCharger-boosted, Pro Line Racing-powered ’69 Camaro took another record-breaking leap at Donald Long’s $101,000-to-win “Sweet 16” event on Thursday in Valdosta, running a surreal 3.587 at 206.67 mph in Radial vs. the World.

It puts Rivenbark, who just made his first run on radials two months ago, in an exclusive class of one, becoming the first driver in RvW history to make a pass in the 3.50s.

“It still hasn’t set in yet,” Rivenbark said. “I’m still trying to comprehend all of it.”

He’s not the only one after witnessing that monumental blast on Thursday.

“It was definitely a good run. It felt wonderful,” Rivenbark said. “The car had been on a roll all day, we were just waiting on the weather. When I left and the way it carried the front end, you could tell it was on a pass.

“There’s no words for it. I’ve set records before but I’ve never been the first to something like the 3.50s. It’s pretty unbelievable.”

With the rapid advancements Rivenbark and the Pro Line team have made, most expected something big out of the car if conditions were right, and they certainly wasted no time.

But Rivenbark remained a clear step ahead of everyone, again crediting the outstanding work of people like Eric Dillard at Pro Line Racing, Petty, FuelTech and its EFI expertise, and M&M Transmission.

The ProCharger combination continues to work flawlessly as well, making a noticeable difference every time Rivenbark goes down the track.

After setting the historic mark, Rivenbark now is ready to shift his mindset to winning the race and earning the six-figure payday.

Rivenbark felt he let a victory slip away at Lights Out after he lost to Laughlin via red light in the semifinals, and he’s eager to try and make up for that this weekend in Valdosta. Of course, with the qualifying bump already at an incomprehensible 3.731 through five qualifying sessions, nothing will come easy against a field loaded with heavy hitters.

But Rivenbark knows he has a car capable of outrunning anyone – and he has the time slip to prove it – which means it’s all about doing his job on the starting line.

“Even at Lights Out, I felt like I was the favorite and I screwed it up,” Rivenbark said. “I’m out for redemption. It would be awesome to get the win. To set the record and get the win, it would be very, very nice. I’m getting more relaxed in the car every time, but consistency and good lights are going to be key.” 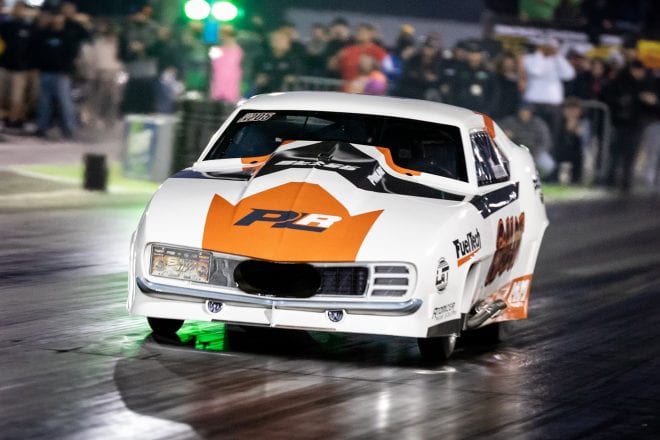