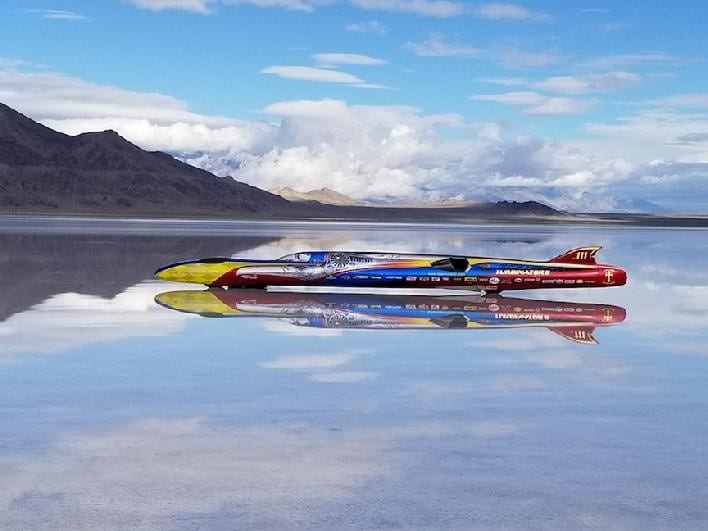 Team Vesco and the Turbinator II are the first to be inducted in to the coveted 500-mph club, thanks to an incredible run at the Bonneville Salt Flats earlier this month. With a top speed of 503.334 mph, the Turbinator II is now the world’s fastest wheel-driven vehicle.

Featuring Mickey Thompson’s innovative land speed tires, the only tires on the market developed to accommodate its 5,000 horsepower engine, the Turbinator II is driven by a Lycoming T55 turbine engine from a CH-47 Chinook helicopter.

Unfortunately, Team Vesco’s history-making run wasn’t enough to land them in the official record books as land-speed records require the average of two runs. Inclement weather conditions prevented the crew from making a second pass and solidifying the official record.

“Ideal conditions at the Bonneville Salt Flats have made for the most exciting season of land speed racing we have seen in more than a decade,” Ken Warner, Vice President of Marketing for Mickey Thompson Tires & Wheels said. “Danny Thompson’s record-breaking success during Speedweek and now Team Vesco’s incredible 500 mph run have made the 2018 season at Bonneville one for the record books.”

In August, Danny Thompson set the land speed record at the Bonneville Salt Flats after a two-way average run of 448.757 mph in the Challenger II, a racecar originally built by his father, Mickey Thompson, more than 50 years ago. Thompson’s run broke the 439-mph record held by George Poteet.