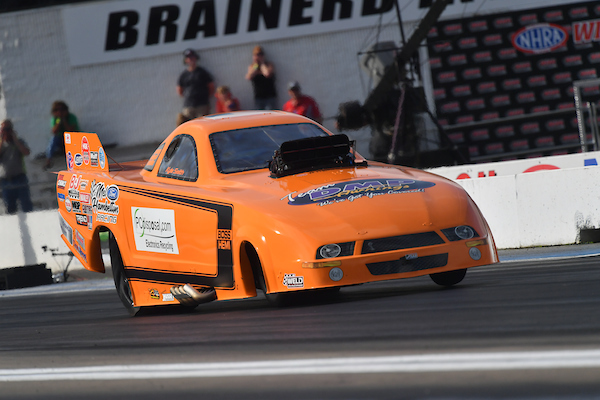 Most racers work their way up to racing six-seconds down the quarter mile at over 250 mph, but for Kyle Smith, there was no methodical path to top-tier racing in NHRA’s premier Sportsman league, the Lucas Oil Drag Racing Series. It’s only ever been Top Alcohol Funny Car for the Wichita-area native, and on the heels of back-to-back regional wins and his first national event triumph, Smith is showing that he’s right where he belongs as the series heads to Indianapolis for the Dodge//SRT NHRA U.S. Nationals at venerable Lucas Oil Raceway, Sept. 1-5.

“When I was younger, going to the races with my dad, this is the only class I really watched and wanted to race,” said Smith, whose father is veteran NHRA West Central Division competitor Stan Smith. “When my dad decided to leave the class, I was sad because I was starting to become more involved. But it was time for him to do something different, and Pro Mod was up-and-coming. It was great to watch him have some success there, but all along, I knew deep down that I really had no interest in competing in any other class than this.”

Smith, now 32 years old, licensed in Top Alcohol Funny Car in 2019. He wasted little time, though, in making a statement and won the 2020 Division 5 regional race at SRCA Dragstrip in Great Bend, Kansas. With a win on his scorecard in just his first full season, Smith came into 2021 with all cylinders firing and a drive for more.

He was rewarded early with an incredible and unexpected victory at the lauded Funny Car Chaos event at Texas Motorplex, and from there it just kept getting better. A final-round performance at the Dallas regional event was followed by back-to-back LODRS titles in Topeka and Great Bend.

“In my opinion, we really started to turn the corner in St. Louis last year,” said Smith. “We had been fighting the car, and although it was starting to run good, we were a little stuck. But we found an issue [with the fuel system], and that changed the trajectory of the end of the season and going into this year. Over the winter, we made some upgrades and really tried to focus on the areas where we thought we were leaving something on the table.”

Smith explained that their appearance at this year’s Funny Car Chaos event was truly meant to be a test. The team was aware that there would be a handful of nitro cars on the property that were exceptionally quick, but as soon as they made a pass of their own, they knew they were actually in the game.

“Before we made that first run, I thought, hey, this will be great for us,” said Smith. “What cooler place is there than to be part of one of the largest Funny Car fields in history? But all of a sudden, we roll out of the trailer and run about as fast as we’d ever been. Each round, dad did his thing and we got progressively faster. The next thing you know, we’re running a career best number next to Del Worsham in the final round. It was great.”

Born and raised in Kansas, Smith takes particular pride in racing well in his home state. That being said, it was a large sting when he went out first round at the Topeka national event at Heartland Motorsports Park in early August. The burn was quickly soothed, though, as the team packed up and headed straight to Brainerd International Raceway, where Smith claimed his first national event win in his first final round at the Lucas Oil NHRA Nationals.

“We weren’t even planning to do Brainerd, we had run three weekends in a row leading up to it, but then we struggled in Topeka – our car had been running pretty good, but we couldn’t get a handle on the track,” explained Smith. “That left a little bit of a sour taste in our mouths, so we decided we needed to try to get a little redemption.”

The victory was the perfect way to get warmed up to compete at the most prestigious race on the NHRA Camping World Drag Racing Series tour, the U.S. Nationals. There, Smith will not only run for the trophy in the main event, but he will also race for the coveted JEGS Allstars hardware as the Central Region’s Top Alcohol Funny Car representative.

“Bob [McCosh] had a stranglehold on our region, and Kris Hool was one round ahead of me [to qualify for the Allstars],” said Smith. “I have a lot of respect for them both. The Topeka regional was the last event we could claim, and we just decided to go and do our best and let the cards fall where they may. Honestly, it’s kind of a shock. There are guys that have raced out here for 40 years and never qualified for the Allstars, so to be able to do it in our third year is just really special.”

Perhaps one of the more unusual pieces of Smith’s story is that the only opponent he has ever come up against in the final round is McCosh. To date, Smith has won four of their five meetings (three regional, one national).

“I think it’s a testament to both of our teams, and we both really spend a lot of time in preparation and hard work,” said Smith. “He’s become a friend and mentor, and I think we respect the same things about one another – we don’t make a lot of mistakes because every time the car goes out there, it’s ready. And we don’t leave anything on the table.”

For now, Smith is focused on preparing solidly for a race that he has never attempted before at a track where he and his father have no data on which to lean.

“It’s kind of a surreal feeling to finally be going to Indy. I’m really excited because I feel like we’ve already done more than any of us thought possible,” expressed Smith, who was No. 6 in the national Top Alcohol Funny Car standings after competing in just six races. “I’m looking forward to the challenges ahead and seeing where we can finish the year.”