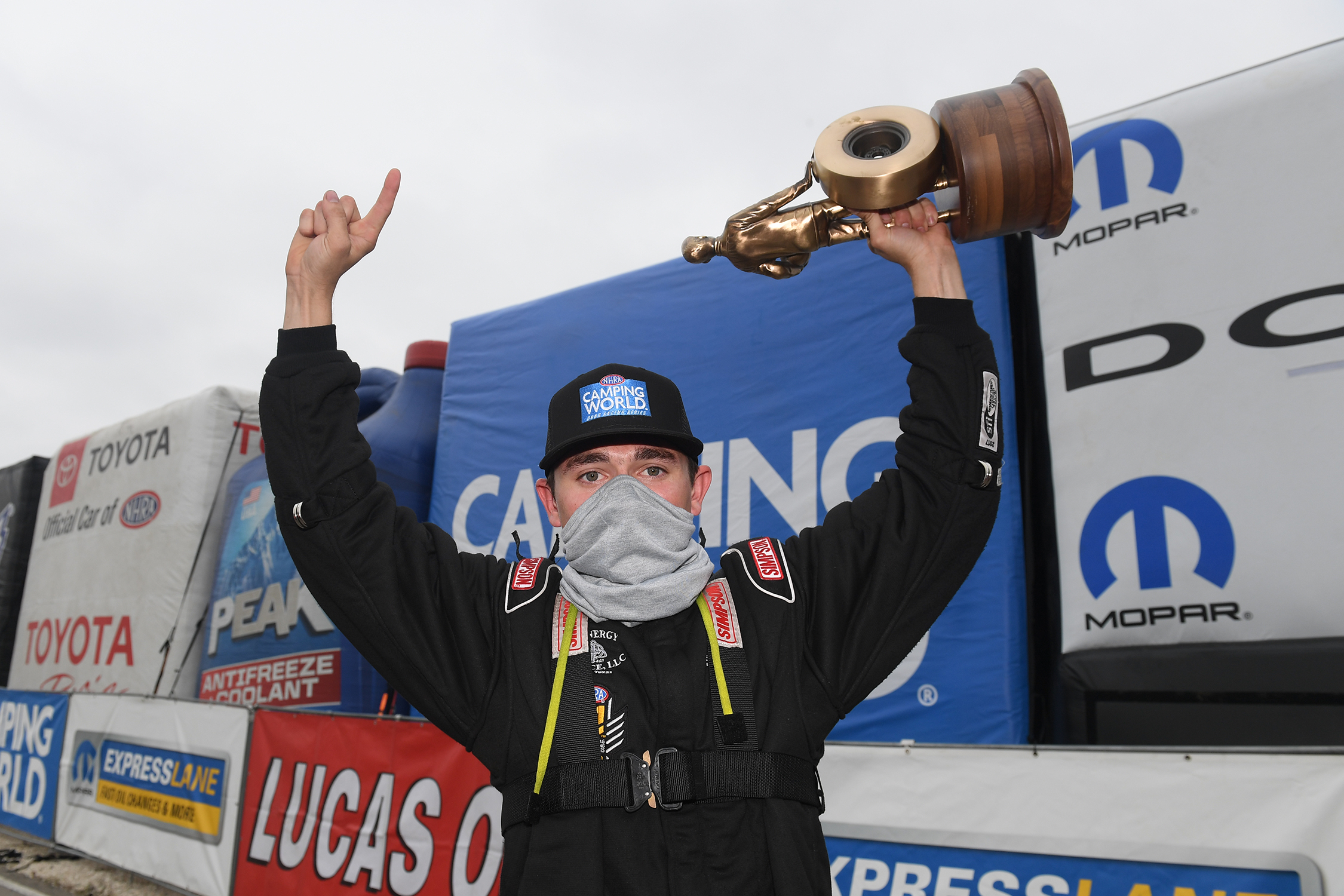 As Aaron Stanfield entered the 2020 season, the goal was to win his first pro race. Well, he did that – and then did a whole heck of a lot more.

Stanfield packed about three seasons worth of accomplishments into one shortened season this year, ripping off five straight wins in the Factory Stock Showdown class, claiming the world championship there and also picking up his first career Pro Stock win as well.

Not bad for a season that barely started before July and not bad for a career that includes just 21 Pro Stock starts and a small sample size in Factory Stock Showdown.

“As far as a year of drag racing, this was kind of a storybook year,” says Stanfield, who was a 2017 selection to the 30 Under 30 list. “When we came to racing [in July], we started fairly well and it continued to roll. The goal is always to win a championship in anything we race, but my first goal was to get my first win. We definitely didn’t expect to have that kind of success.”

It might not be too surprising, however. The 25-year-old Stanfield has enjoyed immense success in the sportsman ranks and grew up watching his father, Greg, win four world championships. The younger Stanfield already has his first, putting on an absolute clinic in the Factory Stock class. He advanced to the semifinals at the first race for the class in July and then didn’t lose again, winning the next five events, many in dominant fashion.

The championship was clinched during a wild weekend in Houston, where Stanfield won his first Pro Stock race and then had to cut his winner’s circle celebration short so he could race in Factory Stock Showdown.

He quickly refocused, won the event in that class and then clinched the championship, all in one magical weekend that could become the stuff of legends.

“It was just one of those crazy days. It was a lot of dreams accomplished in one day,” Stanfield says. “If you would have told me all that would have happened in one day, I would have laughed at you. The odds of it happening are very slim and there’s so many great competitors, so it’s hard to make it all happen. I still can’t believe what we were able to accomplish.”

Stanfield’s certainly become a rising star in both classes, finishing seventh in the Pro Stock standings. He made huge improvements behind the wheel, advancing to the final round in Gainesville before knocking off the legendary Jeg Coughlin Jr. in the final round in Houston.

Stanfield is one of many bright, young stars in the Pro Stock ranks – which bodes well for the future of the class – but it’s been a constant learning process.

“Rickie and Rick Jones, my dad, Erica [Enders], they’ve all helped me as a driver and helped me get comfortable,” Stanfield says. “I’ve never hopped in a car that’s kicked my butt as much as that thing. It’s been a humbling experience.”

Stanfield, though, loves the challenge and loves to work, which makes him a perfect fit in Pro Stock. It has him ready for a big 2021, where he’ll try to win in the sportsman ranks, in Factory Stock Showdown and Pro Stock because, well, why not?

“I’ve been raised to be ambitious and shoot for the stars,” Stanfield says.