Day last of the K&N Spring Fling Million presented by Optima Batteries has come. Five days of racing, over 5,000 runs down the track, countless thousands of dollars given away and it all came to a close today with one more day of eliminations in a $30,000-to-win, FTI Saturday.

“We are so overwhelmed with the support we received from each and every racer that had the confidence in us that we would give them everything they asked for and more,” said co-promoter Peter Biondo. “There aren’t enough thank yous we could offer to show our appreciation. Myself, my wife Emily and my partner Kyle Seipel are so honored by the presence of each racer, crew, family and fans. We had a blast this week and can’t wait to do it all again next year.”

First up today was the Reaction Time Challenge for 25 randomly picked racers to take a shot at either a double “0” or perfect triple “0” reaction time. Any .00X earned the driver a crisp $100 bill, with a perfect light ten crisp $100 bills. No one was able to score that perfect .000, but five racers walked away with a piece of paper with a photo of Ben Franklin.

The PRO38 final of footbrake cars was an all-Schmall affair with brothers Andy and Brandon going at each other with brother Andy taking the win back home along with the $500 bonus and advancing into round seven. 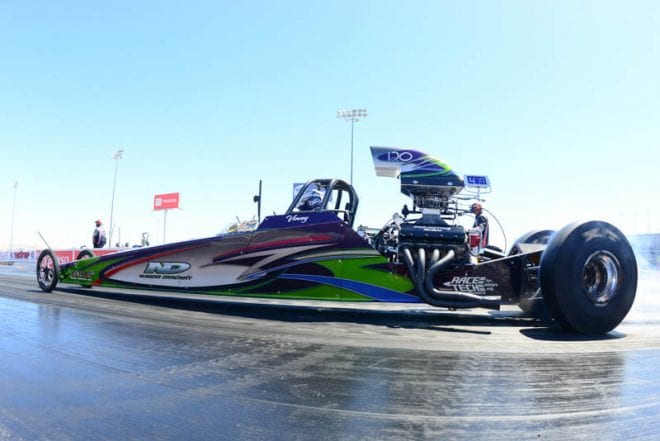 Quarterfinals had Dimino on the bye to advance to the semis, while in a classic two for one where a win also earned you the semifinal round bye run, Dye turned on the red-light to advance Labbous to his second final of the week. In the other half, Carter used a .017 package to defeat Burleson, which left Carter to battle it out with DiMino to see who faces Labbous.

In that semi, Carter had a .042 reaction time while DiMino left with an .015, a deficit Carter couldn’t make up, advancing DiMino to face Labbous in a battle of former Fling winners.

It was the 2018 version of this same event when Vinny DiMino seemingly couldn’t get out of his own way let alone win a round of racing. But by the final day, Saturday, he turned on ten win lights to take the trophy back to New York with him. Flash forward one year, and as he said, “I was really getting beat up all weekend here. But whatever it was, we turned it around for the win.”

As the box score shows, Labbous dropped it red in the final with DiMino scoring a .016 reaction time and a dead-on the dial with a “4” for the win.