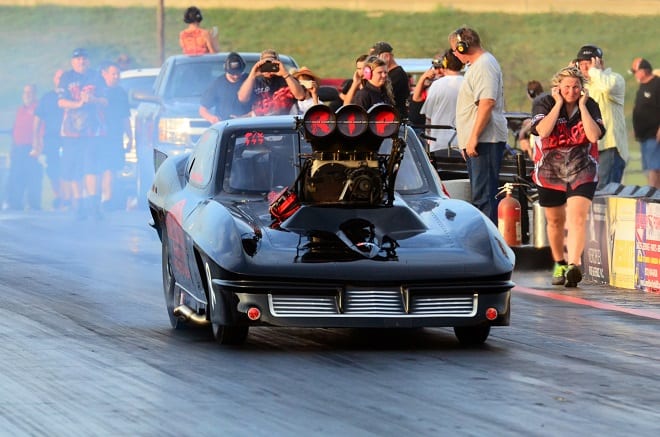 Rain outs suck. It’s a fact of racing. “Hurry Up & Wait” mode at a drag strip leads to overthinking set ups, wasting your weekend and, in some cases, way too many trips to the concession stand.

But sometimes, a rain out can lead to a fifty thousand dollar payday.

Steve Wiley was planning to take his ’63 Corvette Pro Mod to his regular track at Texas Raceway in Kennedale, Texas for the Texas Outlaw Pro Modified Association event there in March. However, the ‘R’ word hit and the event was shut down. Wanting a place to put his Hemi-powered machine through its paces, he headed to San Antonio Raceway for the Bounty Hunters No-Prep Nationals. 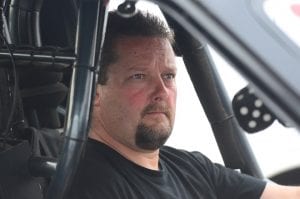 “(San Antonio) is kinda my home track because I’m originally from Austin,” Steve said. “I don’t live there now, but I was one of the first to make a trip down that track when it was built and we kinda called it home. We keep track of what’s going on down there and there’s been some talk about that race and that it was going to be big and a lot of people there and so forth. We had just finished rebuilding the car and needed a place to go, so that’s where we went.”

No-prep racing has drawn massive crowds, especially in the South, with the theory being it provides a street-racing feel with the safety of a professional drag strip. While the no-prep description is a bit of a misnomer as drivers aren’t racing on a virgin surface, no spraying or track prep is done the weekend of the event. Wiley said it definitely gets a little hairy, especially when the rubber starts running out towards the finish line.

A drag racing veteran, Wiley really had no idea what to expect racing this format as it was his first time doing so. A true “run what you brung” race, there is no qualifying. Drivers unload their cars and head to the lines. Needless to say, it’s a unique experience.

“We didn’t know what it was going to do,” he said. “Usually, there isn’t any time trials; you just unload it and go to the staging lanes and go by the number. At that point, we didn’t know what we were going to do. We coulda went up in smoke in the first round. As luck would have it, or having a really good car, it made it down through there and kept going all night long.”

With a lack of track prep, there’s the need for all-new setups. Changing the timing and making adjustments to the fuel system were necessary to race the track, creating challenges a driver/tuner won’t see at a “normal” strip.

“Yeah, it was quite a bit different, actually,” he said. “We obviously didn’t spin the blower as hard as we normally do, so 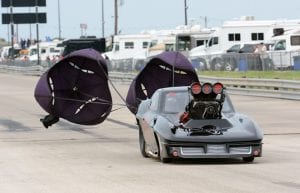 the boost was down about ten pounds on average, even more so on the starting line. And of course, when you take air away, you gotta take fuel away. We had the motor down on power, backed down quite a bit and then more timing out of the motor, that’s the other angle that you take.

“After you get a run or so underneath you, you get an idea of where you need to be adjusting, whether you need to pull timing or put timing.”

The overall feel of the track, according to Wiley, was one of being on the edge, especially the further down the eighth-mile he raced. The starting line got better over the course of the evening, but with no rubber and no spray, it created hazards drivers like Wiley have to get used to.

For many, the immediate thought when hearing a description of no-prep racing is safety, especially in the aftermath of the Ronnie Davis tragedy in Rockingham. Wiley, while always aware of what could happen behind the wheel, said his car was running on a rail all night in San Antonio and the wide track provided room to correct mistakes.

Racers will race anywhere whether there’s a crowd or not, but most, if not all, promoters would like to see packed grandstands and the no-prep format has done that. With small-tire grassroots racing becoming more and more popular, this type of show has both old-school drag racing fans coming to the track as well as younger enthusiasts lured to the strip thanks to shows like “Street Outlaws.”

“It’s the hype that comes along with it, the grudge factor,” Wiley said. “The guys out there are saying they’re better than this guy and so forth. A lot of fans come to see that. Unfortunately, a lot of them come out to see the wrecks and (stuff) like that. I don’t think that’s the majority of them, but there’s going to be some of that. Just the simple fact that you’re basically on the edge entices people. I think that’s a big part of it.

“And then people like me bring the car that I’ve got and people say ‘Wow, there’s no way this guy’s going to make it down the track,’ and then I go six rounds and end up winning the race. I think you’re going to see a lot of people showing up at these races to see if they can do what I did.”

This story originally appeared in Drag Illustrated Issue No. 109, the Outlaw Issue, in May of 2016.