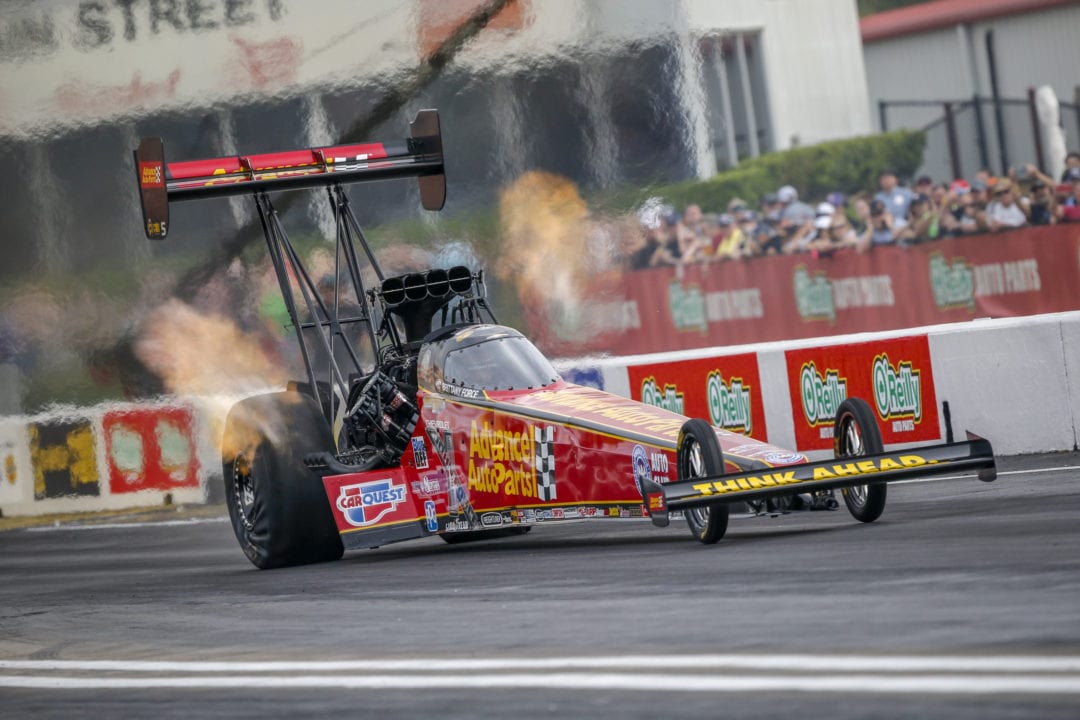 John Force and Brittany Force led the nitro categories Friday at the Mopar Express Lane NHRA SpringNationals at Houston Raceway Park. The father-daughter duo each ended the day in the No. 1 qualifying positions in their respective categories for the first time together.
Brittany Force set both ends of the track record when crew chiefs David Grubnic and Mac Savage tuned the Advance Auto Parts Top Fuel dragster to a 3.661-second pass at 332.18 mph under the lights in the second qualifying session. Force, who was No. 1 entering the session with a 3.738-second pass at 319.29 mph from earlier in the afternoon, had shifted down to the No. 5 spot by the time it was her turn as the last pair down track. With header flames lit side-by-side with Steve Torrence, Force retook the top spot with the fastest and quickest run Houston Raceway Park had ever seen.
“That was an amazing pass for this Advance Auto Parts team. It took us awhile to find our stride and we’ve been turning a corner these last few races. In Vegas we almost had it, we were runner-up and to come out here this weekend and go number one Friday night is awesome,” said Force, who picked up six bonus points for being quickest in both sessions.
“After we got the first run done, we knew we were safe, depending on weather conditions tomorrow, we knew that number would hold us. We were able to push like we wanted in the second session and David Grubnic told me before I jumped in, ‘I’m going to surprise you and I’m going to put a hell of a number on the board,’ and he certainly did. I couldn’t hear him at the end of the track but I knew it was good. No clue it was a .66 until I got out of the car.” 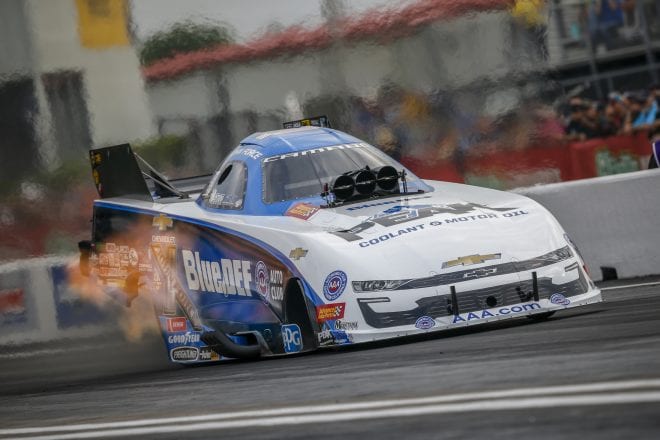 John Force powered his PEAK Coolant and Motor Oil / BlueDEF Chevy Camaro SS Funny Car to the No. 1 spot off the efforts of his 3.888-second pass at 319.29 mph from the first qualifying session. His stout run earned him three valuable bonus points. It’s the first time since the 2018 NHRA Arizona Nationals that Force has earned three bonus points for being quickest in a qualifying session, that’s 26 events and 103 qualifying rounds ago.
While Force didn’t improve in the second session, the PEAK Camaro stayed consistent and ran 3.958-seconds at 316.45 mph.
“You look at Houston and they always seem to have pretty good race tracks. I won my 100th here and the conditions have been good. We’ve had cloud cover all day,” Force said. “Tim Wilkerson (who was in the lane next to Force) joked with me that he clicked it off a little early to give it to me but he was right there too. We’ll see where it goes. We want to come back and see if we can do it again. We slowed down and ran a .95.
“We need to give credit to the Angel family (who own and operate Houston Raceway Park),” continued Force. “Whatever they did down there on the track, we used to have problems and the money they’ve invested in this track and NHRA was a good call.”

J. Force is already in a better position than he was a year ago in Houston, when the drag racing veteran failed to qualify for the event. J. Force is in search of his eighth win at Houston while his daughter looks for her second.

Racing action at the Mopar Express Lane NHRA SpringNationals presented by Pennzoil will continue on Saturday with nitro qualifying beginning at 2:30 p.m. CT.