Chris Shaffer took his 1966 Plymouth Fury, dubbed the S.S. Furious, to the 2020 Pro Stick Racing season championship. Many years of racing with Pro Stick saw Shaffer get close to the title, earning several second and third placings in the season-long standings, but he was not able to attain the ultimate goal until 2020. Late in the season, Shaffer was able to boost his points total with a runner-up at the September Beaver Springs race, and then at the season finale at East Side Speedway, he powered through the 42-car field with a win.

As the rounds went on, Shaffer kept treeing his opponents, including Charcalla in round 4. The win over Charcalla sent Shaffer to a bye run in the semis. His final-round opponent was Tommy Lumley in his four-door Nova. Once again Shaffer won at the tree, an .026 light to Lumley’s .032. At the finish line, Lumley broke out by 8 thousandths of a second and turned on the win light in Shaffer’s lane. His 6.03 dial-in stayed on the window all day, as his reaction times were the difference in every race. Leaving Virginia, Shaffer said “I wasn’t sure I earned the title, since I don’t keep track of points.” Finally, he received a call mid-week confirming the fact that he was, indeed, the champ.

The powerplant in Shaffer’s Fury is a 505-cubic-inch Mopar assembled by himself and close friend Matt Bergenstock. The transmission is a GF 2000 from G-Force Transmissions. Looking forward to the 2021 season, a set of 40 spline axles are on order to replace the 35 splines that have been in the car for the past eight seasons. Other than the axle upgrade, it will be racing as usual for the Pennsylvania resident.

“I ran a lot at my home track, Beaver Springs, for many years,” Shaffer says as he reflects on the championship. “I won 10 Street Stick season championships racing with my barn-find race car. Then we started racing with the Pro Stick gang and went on tour. We came close a few times, but I wasn’t sure I was ever going to win the title. Thanks to my wife, Leah, Matt and Caitlynn Bergenstock, for the help over the years and thanks to Eric [Kitchen] – the Pro Stick group is the best organization to race with.”

Despite a year of uncertainty due to CODIV-19, the Pro Stick Racing group celebrated their 25th year of competition. Pro Stick Racing started out as a small group of racers with stick-shift muscle cars running a bracket race format. Kitchen came up with the name “Pro Stick” after doodling on a napkin at his favorite ice shop in Boonsboro, Maryland.

“I went to a race in Kentucky back in 1993 or 1994, and raced with a group called the Ozark Mountain Super Shifters,” Kitchen says. “This was when delay boxes were becoming prevalent. Well, I just wanted to run against stick cars, guys without delay boxes. At that race I met Lones Combs from the Gear Jammers group based in North Carolina. After meeting Lones and talking with racing friends, I thought the idea would work around here [Maryland] too.  I was able to convince 75-80 Dragway owner Bill Wilcom we should have a stick race.”

The very first race saw nine cars compete at the now-defunct dragstrip near Monrovia, Maryland. A few races and a few seasons later, the list included events at nearby Mason-Dixon Dragway in Boonsboro, Maryland, and a journey north to Beaver Springs Dragway in Pennsylvania.  Eventually, the group traveled to Virginia, and for a brief time to New York for races. 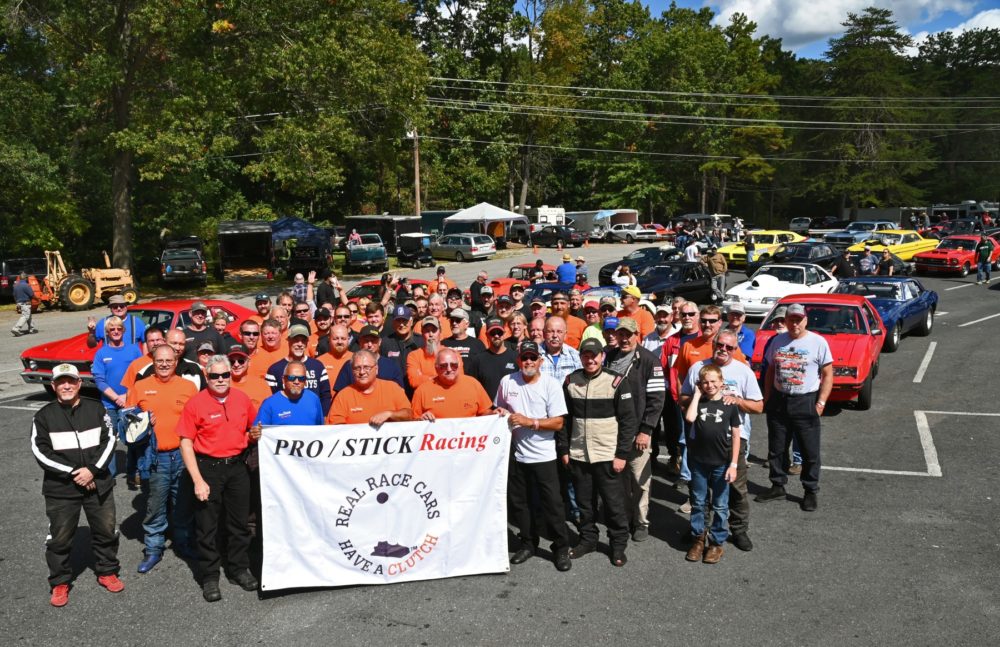 In the 25 years the group has been together, several drivers have earned more than one title including: James Smith [2], Ted McGann [2], Dan Hoyler [3], and Eric Kitchen [5]. Points weren’t kept during the group’s inaugural season.

Part of the reason for the group’s longevity is a fair payout to racers.

“One of my goals was to pay out $1,000 to the winner,” Kitchen says. “We also pay second round loser. We try to give back as much as possible. That’s part of how we’ve grown the group over the years. We don’t race every weekend, and we do some traveling also. Guys get to see different tracks instead of staying at the same place all year.”